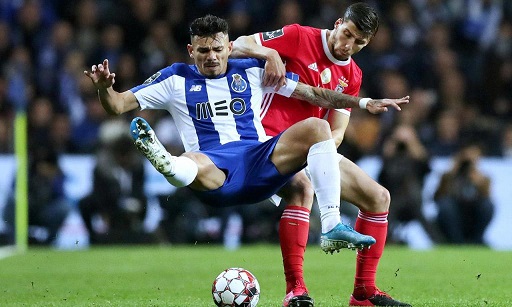 With football collectively awakening from its enforced slumber and several competitions being played out to a rightful conclusion, the attention has shifted to the resumption of title races all across Europe.

The focus on that has seen an increased amount of sports betting Colorado with punters trying to predict who will win this season’s Liga NOS. It is a prediction that will only go as far as either Benfica or FC Porto.

Both teams are in action tonight, and are separated by just three points with 6 matches remaining. And once again, these giants of the Portuguese game are straddling the two highest rungs of the Liga ladder, and although this season’s title race looks as if it will go down to the wire, questions regarding the competition’s overall health must be asked.

You need to go back as far as the 2001/02 season for the last time a club outside the duopoly of FC Porto or Benfica won Portugal’s top division. Although some have since come close, a closed-door policy is currently in operation.

Sporting Clube de Portugal was the last team outside the duo mentioned above to win the competition. Although they have come close to more glory on numerous occasions, they have since played the role of bridesmaid rather than the bride.

None more so than between the 2005/06 and 2008/09 campaigns, when the Green and Whites of Lisbon finished runners-up to FC Porto for four consecutive seasons, as the Dragons roared to league title victories 21 through to 24. Then in 2015/16, Sporting led the way for most of the campaign, only to be pipped by Benfica near the end of the season.

As far as Portuguese football is concerned, there is the moniker of the ‘Big Three’ – the trio consisting of the clubs mentioned, and with that label, there is very much a case of the “haves” and “have nots” within the domestic landscape.

However, due to Sporting’s lack of success in the last two decades, they almost seem to find themselves in a no man’s land between the genuine ‘Big Two’ and the rest of Portugal’s top-flight competitors.

To make matters starker, a total of 70 different clubs have attempted to win Portuguese football’s biggest prize, and since its inaugural season back 85 years ago, just five clubs have reached the promised land.

Just 7.1% of all the clubs that have had a crack at domestic glory have gone on to fulfil their primary objective. When you consider that no club outside the twin towers of Porto and Benfica have climbed this mountain in 17 years (and that will soon be 18), it does not make for very good reading.

With that said, a stranglehold of this kind is not unique to Liga NOS, you only have to look as far as the Scottish Premiership to witness a vice-like grip. With no club outside of Rangers or Celtic crowned as champions since 1985, their affairs are arguably much worse.

Looking at some of Europe’s major leagues, Bayern Munich has won its eighth straight Bundesliga, Juventus has moved a huge step closer to an incredible nine Serie A titles in a row, and PSG continues to rule the roost in France.

This suggests hyper-dominance is not confined to one single domestic league, and the solution may eventually be the creation of a European Super League, one that allows the Portuguese kingpins a much sterner test.

Then again, would Porto or Benfica want such a weekly test? Because, without disrespecting either entity, putting them up against Juventus or Bayern Munich may see them on the losing side more often than not.

In addition to that, moving into a European Super League and the potential to finish lower down the pecking order would only damage their respective brands. The winning image that has been cultivated over the past few decades would soon become somewhat tainted.

Quite simply, if all the big guns decide to compete on a cross-continental basis, they cannot all go on to be crowned champions at the end of the season, and although the stakes may be higher, the winning momentum would soon be lost.

A momentum that, even though the calibre of football and the opposition would be of a far higher level, the supporters of Porto or Benfica would then have to deal with witnessing defeat more often, and that could eventually turn them away.

Therefore, the boardroom of either club knows that although the additional glitz and glamour would be highly desirable at first, the sheen of playing in a European Super League would lose its lustre rather quickly.

Calls for a shakeup in Portuguese domestic football are getting louder, especially given the disappointing results of the country’s club sides in international competitions in recent times. Just yesterday, Shakhtar Donetsk’s Portuguese coach Luís Castro, fresh from winning the Ukrainian championship, said it was imperative to make changes to make the Liga NOS more competitive.

Unfortunately from the point of view of the general good of the game in Portugal, it is a plea that has been made by a multitude of individuals over many years, and which has fallen on deaf ears.

New coach Rúben Amorim seems to be having a beneficial effect on Sporting, but come this stage of the season next year, it would come as little surprise if it turned out to be the Eagles and the Dragons contesting to lift the crown once more.

These ideas get floated around to try and make the various leagues competitive but nothing ever happens. The Champions League latter stages are virtually a closed shop to all but the richest teams but do the kids growing up watching now even...

These ideas get floated around to try and make the various leagues competitive but nothing ever happens. The Champions League latter stages are virtually a closed shop to all but the richest teams but do the kids growing up watching now even care? They buy shirts of teams they don't even "support" cos they look cool and everyone seems to be Barcelona fan no matter what country they live in!
The Portuguese teams defo shouldn't join any super league as the empty seats at the Luz during this season Champions League home games show its the Portuguese liga that counts for them.