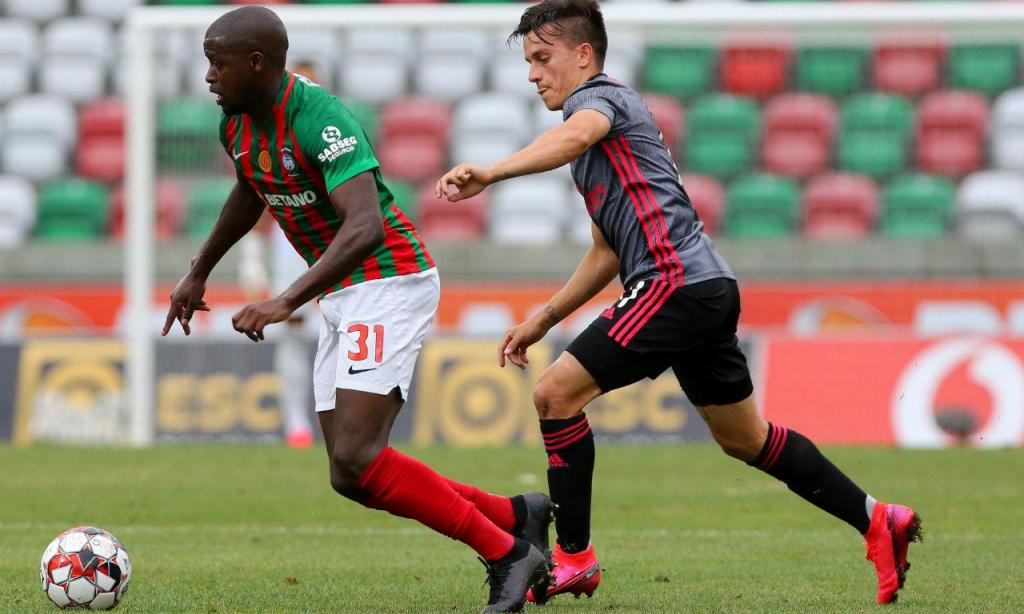 Only five matches remain in this extended Liga NOS season and while the division waved goodbye to Aves this round, there remains plenty to be sorted out in the coming weeks.

Jornada 29 saw its fair share of drama as Rio Ave toppled Braga in the game of the week, heating up the battle for Europe as Famalicão stumbled. There is one more team still to drop down to the second tier next season and this fight intensified too. Only four points separate six teams battling to preserve their top flight status.

Marítimo did their bit on the latter point to move up to 12th place and in doing so swung the league title pendulum ever closer to Porto’s grasp, upsetting Benfica in no small part thanks to a stunning cameo from PortuGOAL Figure of the Week Nanú.

Portuguese-born Guinea-Bissau international Nanú joined Marítimo back in 2015 having come through the ranks at Beira-Mar. He initially struggled to make the grade with his current club, largely operating in the B side but found himself closer to the first team in early 2018, making some bench appearances before catching the eye in the 1-1 draw with Moreirense late in that season.

The following campaign onwards Nanú’s stock continued to rise and this season he has properly established himself in the XI with a series of confident displays, his versatility in being able to play up and down either flank proving a useful option

Nanú began Monday’s match stationed deeper in right full-back, a role he has fulfilled for much of the year but in general he has shown more aptitude further forward throughout the campaign as arguably one of Marítimo’s most consistent performers in what has been an up and down season for the Madeira side.

He was caught out on a couple of occasions by the attacking runs of Benfica left-back Nuno Tavares as the defending champions dominated the first half, Marítimo relying on the excellent form of their goalkeeper Amir Abedzadeh to keep the Eagles at bay.

Late in the half though the home side threatened and Nanú gave a glimpse of what was to come later, a superb burst forward saw him find Rodrigo Pinho in attack, who struck past Odysseas only to see the offside flag correctly raised.

0-0 at the break, Benfica’s frustrations continued into the second half and their profligacy in front of goal was punished in the 74th minute with Nanú the architect of their demise. Picking up the ball inside his own half, the 26 year old broke forward leaving Andrija Živković in his wake before a brilliant bit of skill embarrassed centre-back Ferro. Once into the penalty Nanú kept his composure to find Jorge Correa at the back post, who couldn’t miss.

A terrific example of how effective Nanú can be in more advanced areas, and just four minutes later he presented another exhibition of his ability and pace. Marítimo substitute Joel Tagueu did brilliantly to tussle with Nuno Tavares and win possession for the home team, laying the ball off for Nanú who again more proved far too much for Ferro to deal with, breezing past the Benfica defender with ease before setting up Pinho to double the lead in almost identical fashion to the opening goal.

Tagueu thought he’d compounded Benfica’s misery further with a third goal only for VAR to adjudge him offside in the buildup, but nonetheless the Lisbon side had no response in crashing to another devastating defeat.

A hugely significant moment in the Liga NOS title race but it must be said a massive victory for Marítimo too, the result dragging them further away from the relegation zone as they look to preserve their top flight status.

Nanú’s fourth and fifth assists of the league season cement his status as one of the attacking full-backs to watch in Portugal. Simply put his contribution to Monday’s match was game-changing, and there aren’t many players that have displayed that quality in the defensive third in this division.