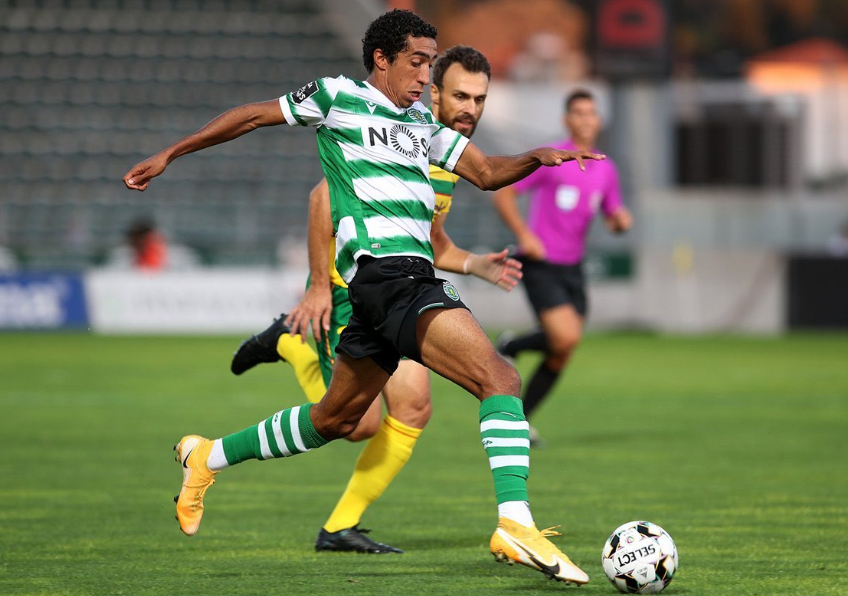 Sporting have commenced their 2020/21 Liga campaign with a 2-0 victory away to Paços de Ferreira following consecutive victories from rivals Benfica and FC Porto on Saturday night.

The Lions, in action on Sunday for the first time in domestic competition after last week’s encounter versus Gil Vicente was postponed because of a Coronavirus outbreak, claimed all three points after a Jovane Cabral penalty and Sebastian Coates finish spearheaded Rubén Amorim’s side to victory.

Benfica took their points tally to six after defeating Moreirense by the same margin at home before Porto, in a much-anticipated Invicta Derby versus free-spending Boavista, starred with a 5-0 thrashing.

Elsewhere, Sporting de Braga registered their second defeat of the season as Santa Clara held onto a 1-0 score-line against Carlos Carvalhal’s men at the Estádio Municipal. Here’s the peak of the action from Matchday 2:

Debuting in a victorious Europa League qualifier against Aberdeen, Sporting were out to carry that good form into their first Primeira Liga meeting as well, away to Paços.

Young Tiago Tomás, the hero in midweek, spurned a great opportunity to tuck in the opener early on, but he would set up the opportunity to break the deadlock midway through the first half after his shot from the edge of the box deflected onto Douglas Tanque’s arm, raking in a penalty rather controversially.

Jovane was quick to claim responsibility and dispatch his conversion with aplomb from the 12-yard-mark, setting the Lions ahead for the remainder of the first half.

Sporting captain Coates made things even more comfortable in the 63rd minute, taking advantage of centre-back partner Zouhair Feddal’s knockdown before volleying into the far corner.

The two efforts were enough for the Lions on the night as they switched their attentions to Thursday’s defining Europa League date with LASK Linz, the final stop before the group stages.

In their first outing at the Estádio da Luz, Jorge Jesus’ men had eyes on three more points to add to the ones accumulated in style versus FC Famalicão, last weekend, as they welcomed Moreirense to the capital.

Captaining his side in what appears to be his final day in Benfica-red, Rubén Dias opened to scoring for the hosts with a big leap from a corner, 20 minutes in.

New boys Darwin Nuñez, Everton Cebolinha and Jan Vertonghen all neared a second prior to the half-time whistle, with Gian-Luca Waldschmidt going even closer in the second period after seeing his effort cleared off the line.

Haris Seferovic came on to add the finishing touches to a comfortable victory for Benfica, benefiting from an investing run from Darwin before tapping home the Uruguayan’s cross and securing a 2-0 win.

Generating plenty of attention with each summer signing, there was lots of intrigue attached to what Boavista could do against the champions, Porto, at the Bessa, as Sérgio Conceição’s team bid to keep up with Benfica.

With both sides goalless at half-time, Jesús Corona was on hand to dismantle the impasse with a strike from a tight angle, moments before Sérgio Oliveira doubled the Dragons’ lead from a free-kick in the 59th minute.

Moussa Marega‘s run in behind Boavista’s defence enabled the forward to grab a third in the 67th minute, but it was the Malian’s second that caught all the praise after a well-worked set-piece, straight from the training ground, was crowned by the number 11's close-range finish.

Luis Diaz’s strike on the turn snatched a fifth for Porto as late as the 92nd minute, propelling the title holders back to the top of the table, alongside their competitors Benfica.

The opening game of Matchday 2 was marked by Carvalhal’s return to Braga's home dugout, seeking his first victory of the season after losing 3-1 to Porto, last week.

There’d be problems early on for the Arsenalistas, however, as Thiago Santana found the space to volley home in the 5th minute, with Santa Clara looking threatening on the counter throughout the first half.

In a not-so-daring second period, it was all one-way traffic for Braga in the following 45 minutes, set by Ricardo Horta’s fierce strike from a tight angle against the post on the hour-mark.

Come the 74th minute, it was Ricardo’s brother, André, who'd take on the frame of the goal, wrapping his left foot around the ball from the edge of the area before hitting the underside of the bar.

Braga continued to huff and puff in search of a deserved equaliser but would find no way to avert a thus far winless start to the season.

Proud of Sporting for winning games with so many players out due to covid -19.
Too bad this fact isn’t given any important by this site.

That penalty given to Sporting with that absolutely silly handball decision is dangerous, in the premier league they are complaining in drones and the Portuguese should join aswell, no way that should have been given as a penalty it takes a...

That penalty given to Sporting with that absolutely silly handball decision is dangerous, in the premier league they are complaining in drones and the Portuguese should join aswell, no way that should have been given as a penalty it takes a deflection of another player then hits his hand with the ball not going towards goal.

Yeah sure Sporting are my team so it's for you it's great but it weren't always be for Sporting, every team will be conceding bs penalties that come out of nowhere, look at the Newcastle game against Tottenham. They did nothing to merit a draw and got given a penalty that was gifted from the gods themselves.

The 2nd goal was nice though and in reality Sporting were the only team which looked like winning but still that penalty was stupid.