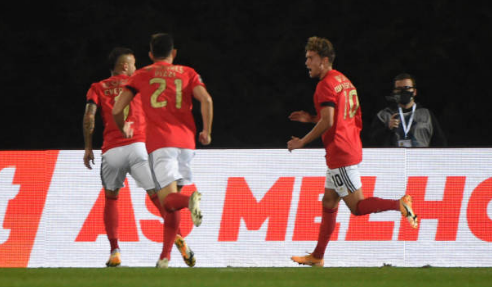 Benfica have gone five points clear at the top of the table following FC Porto’s 2-2 draw against Sporting, enabling them to take advantage with a 3-0 win away to Rio Ave, this Sunday.

A brace from Gian-Luca Waldschmidt helped Jorge Jesus’ team on their way to their fourth league victory of the season, distancing themselves from second-placed Porto, currently on seven points from a possible 12, and city rivals Sporting who are also on seven points but have a game in hand.

Elsewhere, Sporting de Braga were able to make it back-to-back wins in their reception of Nacional at the Estádio Municipal, defeating the newly-promoted side 2-1. PortuGOAL has more of the first ‘Clássico’ weekend of the season.

Courtesy of Porto’s match-up with Sporting at the Alvalade, pinning two of the famed ‘Big Three’ against each other, Benfica lined up to make the most of their rivals' 2-2 draw when taking on the much-lauded Rio Ave at the Estádio dos Arcos.

Jesus couldn’t have asked for a better start from his players, seeing Everton Cebolinha assist with Waldschmidt with a cute back-heel before the German could slam home the opener in the 6th minute.

Benfica continued to throw warnings at on a nervy Rio Ave backline, missing out on two goals chalked off for offside before Waldschmidt, deep in stoppage time, took the visitors into the interval with his second of the night.

In a quieter second half, Gabriel's late goal, firing in from close range, cemented a comprehensive defeat for the hosts, yet to win in the league and confirming Benfica's fourth win on the spin at the top of table.

After claiming their first league win of the season in the previous fixture, Carlos Carvalhal’s Braga were out to build momentum against a Nacional side experiencing a respectable start to their campaign.

The Arsenalistas got their noses in front in style via Fransérgio in the 28th minute, as he caught the Nacional keeper Daniel by surprise with a curling effort from range on his left foot.

Braga’s second was just as wonderfully executed in the 43rd minute as the first, this time through Iuri Medeiros, who was on hand to send the hosts into the break with a 2-0 lead after finishing acrobatically inside the box.

Enjoying the lion’s share of opportunities in the second period, Ricardo Esgaio should’ve made it 3-0 in the 70th minute when blazing over a first-time finish from close-range.

Nacional threatened to make the Braga skipper pay for his miss following Nuno Borges’ claw-back in the 86th minute, but it’d prove no more than a consolation goal come full-time, wrapping up a 2-1 win for the Europa League hopefuls.