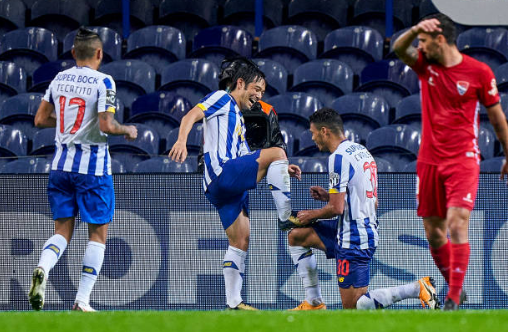 FC Porto returned to winning ways with a 1-0 victory at home to Gil Vicente prior to Benfica’s 2-0 win against Belenenses at the Luz, prolonging the Eagles’ perfect start to their Primeira Liga campaign to five games.

Jorge Jesus’ men, currently five points clear at the top of the table, were placed under pressure by Porto’s first league win since Matchday 3, beating Gil Vicente with a sole Evanilson goal before Sporting joined in with the jubilation, taking three points away at Santa Clara in a 2-1 triumph.

Including their midweek defeat to Manchester City in the UEFA Champions League, the Dragons had been starved of the taste of victory for three games and looked keen to bring that wait to an end at home to Gil Vicente, themselves winless since their opening home game of the season against Portimonense.

Led by fresh blood in attack, Porto almost took the lead on the hour-mark through Toni Martinez’s header, parried away just moments before Evanilson went even closer with a glancing effort onto the crossbar.

Shoya Nakajima would treat Evanilson to an easier route to goal in the 41st minute, finding the Brazilian forward free at back-post to tap in the opener, as well as his first for the club, just before half time.

Matheus Uribe spurned the chance to make it 2-0 from the penalty spot in the 59th minute, prior to Zaidu Sanusi’s second yellow card complicating matters further for Sérgio Conceição’s team, but the title holders would have enough about them to hold on, moving up to second in the league table.

Following a hard-earned draw in the first ‘Clássico’ of the season against Porto, last week, Sporting were out to get back on winning terms and re-polish what’s been a positive start to their domestic affairs, thus far.

Pedro Gonçalves, fed by Jovane Cabral’s through ball, set the Lions off onto the right path, speculating from a tight angle and firing his strike into the back of the net in the 20th minute.

Known as Pote, should Gonçalves keep up his sensational form he may come into the reckoning when Fernando Santos picks the Portugal squad for the delayed Euro 2020, to be contested in the summer of 2021. He was not done in this game.

Santa Clara had a response readied up, however, and it came after Lincoln intercepting Sebastian Coates’ attempt to play out from the back, playing Thiago Santana through on goal before the latter could round Antonio Adan and tap into an empty net, minutes away from the half-time break.

With opportunities drying up at the wrong time for Sporting, second-half substitute Andraž Sporar wasted one of the few real-good chances to undo the stalemate, heading just past the back-post in the 73rd minute from close range.

Pedro Gonçalves was on hand put the Lisbon outfit’s noses back in front with ten minutes to spare, courtesy of a long ball from Zouhair Feddal causing all kinds of confusion for the Santa Clara backline, allowing the ex-Famalicão man to finish into an empty net following the keeper’s failed attempt to sweep up.

With three wins from four and a game in hand, Sporting’s 2-1 win places them in third, level on points with Porto.

Carlos Carvalhal’s side looked keen to capitalise on their rival’s new-found period of transition, as well as their own good form, hitting the right kind of notes in the 27th minute through Ricardo Esgaio, controlling a low cross before driving in the opener.

Galeno upped the anticipation of a second goal with a side-foot volley roaming just past the bar in the first half, meanwhile Vitória’s best moments came from Ricardo Quaresma in the second period as he narrowly missed the target on a couple of occasions.

Braga’s Galeno resumed with a dangerous curling effort aimed at the far-post, dragged just wide in the 67th minute before a competitive affair found a sorry end with nine minutes to go, initiated by David Carmo’s red-card-worthy challenge on Marcus Edwards that paved the way for a melee and two further red cards, this time to Braga’s Fransérgio and Jorge Fernandes for Vitória.

The visitors threatened to extend their lead late on prior to a crucial one-on-one stop by ex-Benfica keeper Bruno Varela, who’s side would have little else to throw at a nine-man Braga ahead of a 1-0 home loss.

Following a goal-filled midweek encounter versus Lech Poznan in the Europa League, lit up by Darwin Nuñez’s hat-trick, the Eagles may have been hoping for a far more tranquil night in the Portuguese capital, welcoming fellow Lisbon neighbours Belenenses to the Luz.

Just six minutes in, things looked to be going Jorge Jesus’ way against one of his many former clubs, taking the lead via Haris Seferovic’s back-post header, set up by Alex Grimaldo’s first-time cross.

Belenenses sought the equaliser in the dying embers of the first half, doing so in the 35th minute through Silvestre Varela before an accurate offside call, on top of the subsequent half-time whistle, took Benfica out of a potentially sticky patch.

The hosts took to the second half by warming to the idea of doubling their lead, going close past the hour-mark with a low strike from Gian-Luca Waldschmidt before Darwin had a goal chalked off for an offside in the build-up.

In the 75th minute, Darwin finally clinched his first league goal in Benfica colours, rounding the goalkeeper on the edge of the area and finishing past the remainder of Belenenses’ defence. The Uruguayan’s strike set the Eagles on their way to their fifth consecutive league victory, moving five points clear of second-placed Porto.