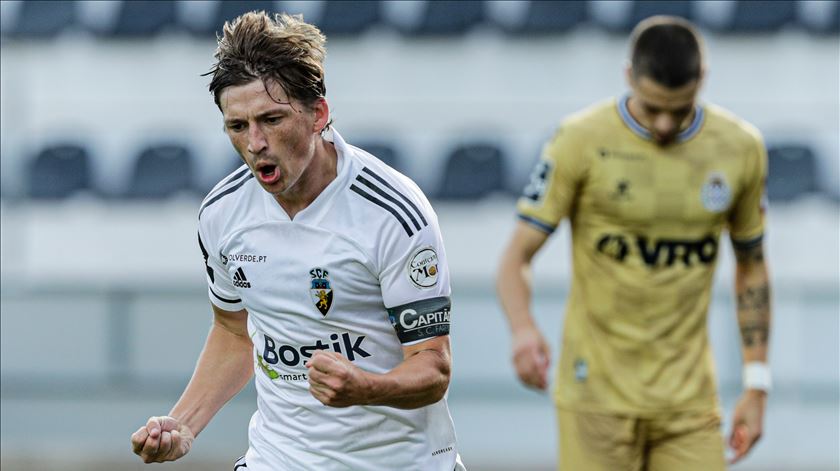 There is a considerable Liga NOS break coming up now with another international round of fixtures upon us, followed by the top flight’s participation entry into the Taça de Portugal, but the league championship action temporarily ended in some style as Jornada 7 provided no shortage of dramatic action.

Braga stunned Benfica as the Lisbon side’s defensive struggles continued, with Porto and Sporting taking advantage with good wins of their own. The latter extended their lead at the top of the division to four points with a 4-0 drubbing over Vitória Guimarães.

Down towards the bottom there were a couple of vital victories, Tondela overcoming Santa Clara but more notably league new boys Farense finally got their first three points of the campaign with a 3-1 triumph over Boavista. Skipper for the day and PortuGOAL Figure of the Week Ryan Gauld continued his impressive personal start in running the show once more.

It’s hard to believe that Ryan Gauld is still only 24 years of age having been a name that football fans across Europe will have been familiar with for some time. Noted for making a very early breakthrough with Dundee United in his native Scotland, Gauld took the somewhat left-field choice of joining Sporting back in 2014 when a number of closer to home big names were similarly interested in his signature. For a teenager to have made such a cultural shift as well as significant step up in footballing terms spoke a lot about his character, the Scot commenting that moving abroad and opening himself to such new experiences was a key factor in his decision.

Overall it is fair to say his time in Portugal has had its ups and downs. Never able to make the grade at Sporting despite often impressing during the minimal opportunities he was given, loan spells at Vitória Setúbal and Aves did ultimately not work in his favour, largely for reasons out of his control (a bust-up between parent and loan club proving his downfall at the former).

Further loan spells with Farense and Hibernian followed before Gauld finally definitively cut ties with Sporting to return to Faro on a permanent basis and he has excelled ever since doing so in 2019. The Scottish playmaker predictably looked far too good for the second tier level and was the standout player in helping the southerners achieve promotion to Liga NOS last year.

The left-footed Gauld spent much of the previous campaign and the beginnings of this one stationed out on either flank, which allows him to drift inside and join the play as well as being able to utilise his excellent close control and skill in wider areas. However it has been a move more centrally in recent matches that has seen Farense’s fortunes reverse, and it has long felt that the “number 10” role is indeed the Scot’s best position on the field.

Sunday’s match with Boavista felt ill-timed for Farense as their opponents Boavista, who have been struggling themselves this season, looked to have turned a corner of their own last week in thrashing then-league leaders Benfica. However Gauld inspired his team to a memorable victory in the club’s history with a masterful performance.

Boavista struggled to pick Gauld up in his free role in midfield and this proved their downfall as the home side broke the deadlock with 20 minutes played. Braian Mansilla’s cross into the box was only half-cleared, and an unmarked Gauld was the grateful recipient of the loose ball, hammering a finish past Leó Jardim from close range.

Despite only standing at 5ft 5ins Gauld showed his aerial prowess in almost doubling the lead 11 minutes later, impressively rising high to power a header goalwards but a flying save from Jardim denied the Scot his third goal of the season.

Boavista would equalise through Angel Gomes (another fine goal by last week’s PortuGOAL Figure of the Week) before the break but Gauld would make another key contribution in restoring Farense’s lead early in the second half, whipping in a corner for Nikola Stojilković to head home against his former club.

Gauld’s adept ability from set-pieces has been a part of Farense’s recent successes, the Scot registering his third assist of the season having provided for 8 goals last term. Eduardo Mancha rounded off the scoring minutes later as Farense earned a deserved win to climb out of the Liga NOS relegation zone.

Often referred to by the unfair “Mini Messi” tag he was monikered with early in his career, Gauld was never likely to live up to that kind of hype but those who have watched Portuguese football closely during his time in the country have clearly seen an exceptionally talented player who has been dealt his share of bad hands professionally in his young career. As a result it is pleasing to see him now flourish at the level his ability deserves, and his regular ownership of the captain’s armband for Farense and superb grasp on the Portuguese language shows how determined Gauld has been to not let his setbacks deter him from achieving his goals in this country. There is plenty more to come from him on Sunday’s evidence.

I'm hoping to see Gauld find his gold in Farense.