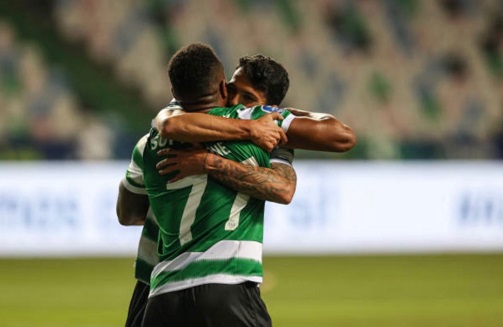 Sporting are through to the Allianz League Cup final after a late Jovane Cabral double turned an imminent elimination at the hands of FC Porto into a 2-1 victory, this Tuesday.

The two rivals endured a cagey affair until the 80th minute, where the Dragons edged ahead courtesy of a Moussa Marega strike past Antonio Adan.

Jovane, fresh from the bench, provided the Lions with a clutch moment just six minutes later with the equaliser before the forward’s 94th-minute finish, on the stroke of full time, turned the tie on its head.

With the spread of Covid-19 affecting both parties coming into the blockbuster semi-final, Sporting welcomed Vitorino Antunes into the side in place of an absent Nuno Mendes, meanwhile Liverpool man Marko Grujic did the same at Porto’s end, deputising for captain Sérgio Oliveira.

Sérgio Conceição’s men enjoyed the brighter share of play as the night commenced in Leiria, causing danger early through Zaidu Sanusi’s tame cross-shot in the 14th minute. Jesús Corona threatened Antonio Adan’s goal further with a strike from the edge of the box floating over some moments later, replicated at the other end by Pedro Gonçalves in the 34th minute.

Marega was presented with the best opportunity of the game in the 41st minute, welcoming Sebastian Coates’ unresolved interception with open arms before seeing his toe-poke from close range denied by the post and gathered by a desperate Adan.

The two sides held onto the stalemate going into the break before the Dragons ramped up the pressure once more with the return of the action, with Marega feeding Matheus Uribe with a cut-back that was brushed over by the wasteful Colombian.

As the affair tightened back up throughout a cagey second half, inspiration to change the course of the game fell Marega’s way as late as the 80th minute, bursting through the heart of Sporting’s midfield.

The Malian striker turned to his left foot, approaching the edge of the area, to take aim at Adan’s goal, proving successful with a bobbling effort into the bottom corner and giving Porto a deserved lead.

Sporting’s response was timely and it came from second-half substitute Jovane in the 86th minute, collecting a ball from the edge of the area and whipping an effort in off the post to level the score at 1-1.

The 22-year-old was just getting started in his late show, being set through in the final minute of the game before poking the ball home from a tight angle. Left without response, Porto succumbed to Jovane’s heroics, as the Lions, running out as 2-1 winners, booked a date with either Benfica or Sporting de Braga, in Saturday’s final.

Great game by both sides. They both went for it when played quick football . Both had chances to score.

Pedro Gonçalves was amazing. Jovane , if he is back in form, could be the reforco sporting needs. He was one of the best players in the...

Great game by both sides. They both went for it when played quick football . Both had chances to score.

Pedro Gonçalves was amazing. Jovane , if he is back in form, could be the reforco sporting needs. He was one of the best players in the league last season. If this game is an indication to come, Sporting will be better off.