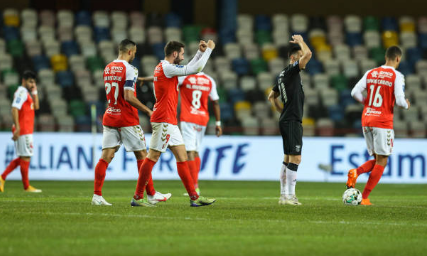 The Arsenalistas took advantage of a weakened Benfica backline to take the lead midway through the first half through Abel Ruiz in the 27th minute, despite encouraging play from the Eagles.

Pizzi levelled things for Benfica from the penalty spot before the break but Braga were again on hand to peg the Lisbon outfit back, regaining advantage in the 58th minute and seeing out the semi-final with a 2-1 victory.

A Covid-19 outbreak in the Benfica camp invoked sweeping changes to the backline set out by Jorge Jesus, calling on the likes of Jean-Clair Todibo, Jardel, Franco Cervi and João Ferreira to slot in, meanwhile Braga, under far less challenging circumstances, had to contend without the presence of key frontman Paulinho, kept on the bench.

Despite the numerous ins and outs, the Eagles settled into the showpiece quicker, threatening early through Darwin Nuñez at the back post as the Uruguayan volleyed wide with an outstretched leg.

Braga looked to reply through Ruiz on two occasions in the 22nd minute, firstly seeing his one-on-one opportunity snatched by Julian Weigl before the German was on hand to deny the ex-Barcelona striker, free on the edge of the area, once more with a block.

The Benfica midfielder wouldn’t be there to patrol Ruiz in the 27th minute, picked out by Ricardo Horta’s cross that set up a decisive glancing effort by the Spaniard, placing Braga 1-0 up.

Carlos Carvalhal’s men looked to exploit the Eagles once more with a lofted ball over their defence and almost hit the jackpot in the 38th minute, as Fransérgio nodded just wide with a diving header at the back-post.

Benfica bounced back with a couple of efforts, initiated by Darwin’s strike from range onto the post before Matheus parried away Seferovic’s header from the subsequent corner.

The trouble continued to come Braga’s way on the brink half-time after David Carmo brought Darwin down inside the box for a penalty, enabling Pizzi to convert in cool fashion just before the interval.

Benfica captain Pizzi returned with the desire to inflict further damage fresh out of the blocks in the second half, as his strike from outside the box was palmed away by a diving Matheus at full stretch.

The Arsenalistas had their eyes on a second goal too, denied only by the crossbar after Fransérgio caused the danger with his head once more close to the hour-mark. Braga made good use of their wave of superiority to take the lead in the 58th minute, via Tormena at the back-post, with Horta again orchestrating things with his second assist of the night.

Via a Ferro mistake late on, a fresh Paulinho had the chance to nab a third goal and kill the game off entirely, dragging a shot wide with Vlachodimos’ assistance, but Braga wouldn't require any more goals on their way to full-time, sealing a date with Sporting in Saturday’s final.

Hey -Z-, still unsure if Braga is suited to be the rightful 4th contender for the league?

The amount of dumb things Z has said could fill a continent.

Just like Porto vs Sporting, this game could have gone either way, Braga are a funny team, you don't know which Braga will turn up, I think the problem Braga have is killing teams, they play really well and can beat any of the top three.

Just like Porto vs Sporting, this game could have gone either way, Braga are a funny team, you don't know which Braga will turn up, I think the problem Braga have is killing teams, they play really well and can beat any of the top three.

Definitely more worried about Braga in the final then if it were Porto or Benfica that Sporting could have faced.

I am relieved we do not have to play Benfica.

Danny
There are no comments posted here yet