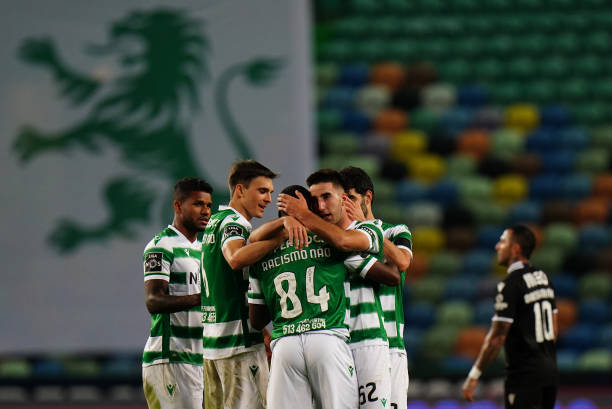 Few Sporting fans could have imagined that the club would be top of the table with a ten-point lead at the start of April. In fact, anyone who did predict that may well have become a medical marvel for their precognitive abilities – it seemed impossible. To make things even better for Sportinguistas, it’s the academy that has been the driving force behind the so-far undefeated season that might finally end the club’s long wait for the league title.

Last year we examined Rúben Amorim’s youth revolution, expecting a longer period of rebuilding. But now, these young players have already become the core of a potentially title-winning team. PortuGOAL takes a closer look at each of Amorim’s youngsters and assesses how they have performed this season.

Nuno Mendes: Of all the young players, Nuno Mendes is the one who looks most destined to have a fantastic career at the highest level. Despite the interest of the European giants, Nuno Mendes has continued his progression and has become a reliable presence at left-back, both offensively and defensively. This improvement accumulated in the 18-year-old making his debut for Portugal against Azerbaijan (as well as being denied a first assist against Serbia through some poor refereeing).

Gonçalo Inácio: Although frequently training with the first team when his young teammates were making their debuts last season, Gonçalo Inácio had to wait until October to make his first appearance. But the 19-year-old’s performances have meant that he has become a starter ahead of Luís Neto and Eduardo Quaresma. Solid in defence, calm with the ball at his feet, and with a surprisingly impressive passing range that allows him to spread the ball to the wingers, Inácio fits into Amorim’s system perfectly. He even scored the crucial winner (his first ever professional goal) against Vitória de Guimarães in the last round. 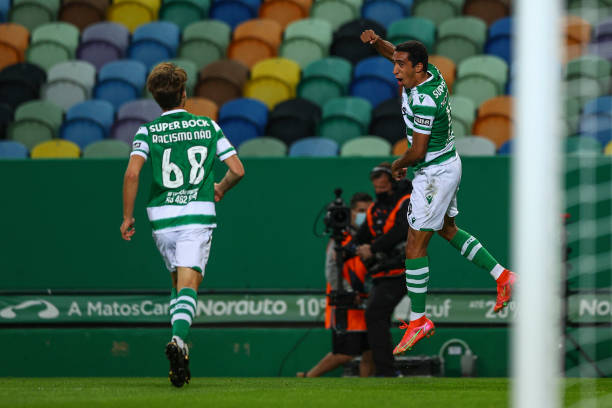 Tiago Tomás: You can’t fault the work rate of Tiago Tomás, which may be one of the main reasons that Rúben Amorim preferred the 18-year-old to Andraž Šporar at the start of the season. The only thing missing from his game so far is simply more goals – having only scored once (a late winner against Tondela) since the start of 2021. With the arrival of Paulinho from Braga interrupted by injury, ‘TT’ had played more than he may have expected. But if he continues to improve, he might even be able to keep his place on the team sheet.

Matheus Nunes: The oldest of players Amorim brought into the team last season at 22, Matheus Nunes has become a first-team regular, having to compete with João Mário, João Palhinha, and Daniel Bragança for a spot in the midfield. Tenacious in the tackle and with impressive speed, the former Estoril player isn’t a true Alcochete graduate like the rest, but he is a great option for Rúben Amorim to have. Not to mention the fact that both of his goals this season have been hugely important for Sporting: sealing a victory over Braga and a dramatic injury-time winner against Benfica.

Daniel Bragança: After impressing during his loan spells at Farense and Estoril, Sporting fans hoped that this would be the year Daniel Bragança showed his promise in the first team. Like Matheus Nunes, Daniel Bragança hasn’t started too many games and has had to impress coming off the bench. But when he does make an appearance his excellent footwork and creativity always shine. If João Mário isn’t retained when his loan expires in the summer, then the 21-year-old may be able to stake a claim as a starter. Eduardo Quaresma: It’s been a tricky second season for Eduardo Quaresma. The 19-year-old centre-back impressed when initially brought into the side but has struggled to get game time since. With the arrival of Zouhair Feddal, the emergence of Gonçalo Inácio, and some questions over his commitment, Quaresma has played just two first team games all season and has instead mostly been playing for the B team. Of course, there’s still a big future for the young defender, but he needs to convince Rúben Amorim once again that he’s worthy of a place in such a solid defence.

Joelson Fernandes: Joelson Fernandes was just 17 when he made his debut last season. Now 18, the tricky winger has yet to make a first team appearance all season but has appeared on the bench a few times. Seemingly destined to be the next in an endless line of superb wingers from Alcochete, he has still impressed with the U23 and B team – scoring some superb goals. But next season might be when we see much more of him at the Alvalade.

Dário Essugo: You’d have to have a heart of stone not to have enjoyed the debut of Dário Essugo after he became Sporting’s youngest ever player. His teammates – some old enough to be his father – comforted the midfielder in tears after he played six minutes of Sporting’s nervy win over Guimarães. In the space of six days Dário Essugo turned 16, signed a professional contract, and then wrote his name in the history books. Before that, he’d been playing football at U17 level and hadn’t played a game in a year. It’s difficult to know how far Dário Essugo can go, but his debut means that any player at Alcochete can become a first team player if they impress.

All of this makes a huge change. In recent years, Sporting have wasted a lot of the talent at Alcochete and lost the opportunity to put faith in Merih Demiral, Matheus Pereira, Domingos Duarte, Ryan Gauld, and more. You’d think under Amorim these players would have had a very different time at Sporting. Indeed, where would João Palhinha be without him?

During the international break Amorim has had a great opportunity to look closely at more of Sporting’s youngsters. This includes Diego Callai (16), who looks like the best of Sporting’s young goalkeepers and has already featured in first team training. Similarly, left back Flávio Nazinho (17) has often been called by Amorim, and was even sat on the bench alongside Dário Essugo against Guimarães. Another 16-year-old that is highly valued at the club is forward Youssef Chermiti, but with so much exciting talent now coming through Sporting it’s hard to predict who’s next. There’s a place in the team for anyone who wants it enough and can prove to Amorim they are deserving of an opportunity.

Now they look promising especially Inacio and Tomas but realistically would be great if one or two of em will become decent players.

Great article. You simply cannot hate what Sporting and Ruben Amorim have done this season. I’m a die-hard Benfiquista, but the Sporting model of development is once again paying off. Seixal has made vast improvements, but there’s still room to...

Great article. You simply cannot hate what Sporting and Ruben Amorim have done this season. I’m a die-hard Benfiquista, but the Sporting model of development is once again paying off. Seixal has made vast improvements, but there’s still room to learn from those who have consistently and traditionally produced the TOP Portuguese talents.

Take a look at Sporting from a few years ago. What an absolute mess. Bruno de Carvalho left the place in absolute shambles. In a short amount of time they’ve surpassed Porto and Benfica, and are looking more promising than ever. Amorim is already one of the greatest coaches in the game IMO.

With so much domestic talent, Jorge Jesus’ and Conceicao’s emphasis on importing players from South America is extremely frustrating. If Bernardo Silva hadn’t gone to Monaco, it’s very likely his growth as a player could have been stunted. Bruno Lage invested and put trust into the Seixal academy, although different, his first campaign reminds me of Amorim’s. Enough about Benfica though.

The talent in this Sporting team is really exciting. I haven’t been this excited about a group of players like this in a long, long time. Tiago Tomás is an absolute workhorse, and if he can work on his finishing, this guy can be a real solid striker. I’m waiting for Joelson to start playing for the senior team, I’ve been following him for some time now, so looking forward to that. This “youth revolution” has come so much quicker than expected, because it seemed at first a long-term project, but the injection of solid established and veteran talent, I think has helped with this.

Zouhair Feddal (3mill), Antonio Adan (free), Joao Mário (loan). Talk about smart business! Sporting has the perfect balance between young and veteran talent on the team. The only thing we can hope for now is that this team doesn’t get gutted this summer. Other than Pote and Mendes (the latter whom I hope stays for at least one more season), I think Sporting should be able to hold onto their players. Maybe the possibility of making a decent Champions League run will entice them to stay for one more season. Investing and placing trust in the academy once again pays off. I’m sick of certain teams and their reliance of importing South American “talent”, where Sporting shows us once again that there’s more than enough talent in Portugal. That’s not to say there hasn’t been talent from SA, because there obviously has been.

Kudos to Sporting, the academy, the management, and all of the Sportinguistas. This has been a long time coming. There is no team in Portugal that deserves it more than Sporting!

Teresa, great to see a die-hard Benfiquista be so complimentary of a rival. I am agnostic as to my favorite Club Team, I have family members that are fans of the big three, so I never committed to one.

Teresa, great to see a die-hard Benfiquista be so complimentary of a rival. I am agnostic as to my favorite Club Team, I have family members that are fans of the big three, so I never committed to one.

I am however, a die hard fan of the NT, so whomever brings up young Portuguese talent, I usually follow them more.

Thanks Paulo - we do exist, although we might be few and far between lol. Certainly I must give credit where credit is due, and Sporting are having a fantastic season and have some stellar emerging Portuguese talents!

Now the everyone had a chance to see Mendes and Palhinha boss the midfield at the qualifiers. Not really a surprise Sporting is in the position it is.

Thanks to the bungling of JJ at Benfica, Portuguese player development was stalled for years....

Now the everyone had a chance to see Mendes and Palhinha boss the midfield at the qualifiers. Not really a surprise Sporting is in the position it is.

Thanks to the bungling of JJ at Benfica, Portuguese player development was stalled for years. His idiotic anti-Portuguese tactics caused many players to leave and go elsewhere. Bernardo, Guedes, Andre Gomes, Danilo P, etc, etc.

Glad to see Sporting go back to its roots. Dont make the same mistake Barcelona did and forget your academy, look at the mess they find themselves in now. Stay true Sporting!