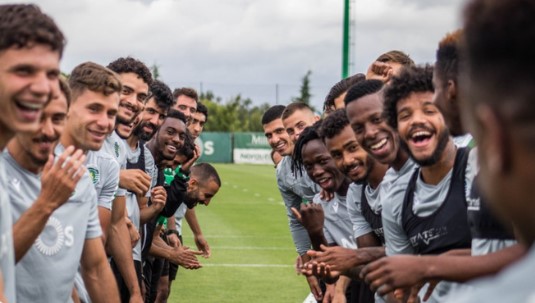 When the Primeira Liga season restarted in early June few would have expected Sporting to become the in-form team. The previously flying Braga have stumbled, while neither Benfica nor Porto appear inclined to make a strong charge for the championship title. It has been Sporting who have shone since the resumption, Rúben Amorim’s side remaining undefeated while fielding teams packed with academy products.

Until the interruption caused by the Covid-19 pandemic, the season had been hugely disappointing for Sporting, but in the last month a pronounced youth movement has managed to get fans excited once again.

Parallels can be drawn to Sporting’s disastrous 2012/13 season. Back then Bruma, Tiago Ilori, Ricardo Esgaio and Eric Dier starred and looked like Sporting’s future. Circumstances changed and for various reasons that didn’t work out, but fans will be hoping the club has learned its lessons for this new generation.

The new kids on the block

Matheus Nunes: The Brazil-born and Portugal-raised Matheus Nunes is the oldest of Sporting’s new crop at 21 and, naturally, he’s the most experienced. In fact, as a first team player for Estoril, Matheus Nunes experienced victory against Sporting in 2018 before signing for the club in January 2019 for the bargain price of €500K. Until his debut against Vitória de Guimarães, Matheus Nunes had only featured for the Under-23 team, but now looks to have secured his spot in the Sporting midfield.

Eduardo Quaresma: A Sporting player since he was just 9 years old, Eduardo Quaresma (no relation to Ricardo) has looked accomplished as a part of Amorim’s back three. Playing alongside experienced colleagues Sebastián Coates and (the now retired) Jérémy Mathieu has surely given the 18-year-old confidence. Indeed, Quaresma has shown more than colleagues Luís Neto and Tiago Ilori to warrant his place in the team. With solid interest from AC Milan and numerous other big European clubs, Sporting may well be worried that the player’s €45m release clause could soon be too low for a player who already looks so comfortable, if a little green, in the first team.

Nuno Mendes: Without Bruno Fernandes and now Jérémy Mathieu, many would say Sporting’s next most important player is Marcos Acuña. However, the Argentinian’s injury has paved the way for the youngest Sporting starter since Cristiano Ronaldo, Nuno Mendes. At just 17 years of age, Nuno Mendes started against Paços de Ferreira and slotted perfectly as a left wing-back into Sporting’s 3-5-2 system. Now 18, the energetic defender is being observed by Europe’s top cubs but currently has to compete with Acuña for a place in the team.

Joelson Fernandes: The latest in Sporting’s long production line of exciting wingers is Joelson Fernandes. Born in Bissau, Joelson has already drawn some impossible comparisons with Cristiano Ronaldo. Introduced as a very late substitute against Gil Vicente, the 17-year-old became Sporting’s third-youngest debutant ever. Joelson still has a lot of developing to do but his potential is gigantic and clubs like Arsenal, Barcelona, and Borussia Dortmund are all apparently very interested in the player.

Tiago Tomás: When Tiago Tomás came off the bench for a lively cameo against Gil Vicente, he had the name Ronaldo on his back. Sporting were debuting next season’s new home shirts with homages to legends of the past. If this particular jersey weighed a little heavier, it didn’t show. Tiago Tomás isn’t a similar type of player that Ronaldo was at 18 though – Tomás is a much more direct forward. Originally signed from Estoril back in 2013, he’s been a prolific goal-scorer at youth level and has impressed with his technical ability and finishing.

Gonçalo Inácio: Despite having not yet made his debut for Sporting, 18-year-old defender Gonçalo Inácio is surely next in line after having trained frequently with the first team and appeared on the bench. Known for his pace and strength, Inácio has been with the Sporting Academy since 2012. Stronger on the left side of defence, Inácio may well benefit from the absence of Mathieu but has to usurp Cristián Borja for a regular place in the Sporting back three.

The certainties and the maybes

These six exciting youngsters are getting a taste of senior football alongside four first-team regulars who have already shown they have what it takes to make a big impact at this level.

Midfield schemer Wendel (22), wingers Jovane Cabral (22) and Gonzalo Plata (19), and goalkeeper Luís Maximiano (21), provided they are not sold in the off-season, will surely provide the basis for Amorim’s youth revolution in 2020/21.

Rafael Camacho (20), Idrissa Doumbia (22), Pedro Mendes (20) and Miguel Luís (21) have all shown flashes of good form in the opportunities afforded them, although all four need to work hard to make a more consistent contribution when called upon. And if Sporting can also fulfil the potential of Rodrigo Fernandes (19) and on-loan midfielder Daniel Bragança (21) then the club has a huge array of young talents to build from.

Of course, an apparently bright future is highly dependent on how Sporting handles the careers of the 16 young footballers cited above. Can the club resist the advances of Europe’s wealthier clubs during the economic impact of the coronavirus? Does the return of the Sporting B team mean many of these youngsters will be playing a lower standard of football next season? Will players be brought in during the transfer window, blocking the route to the first team for its academy products?

Time will tell, but for now Sporting fans can enjoy a bright crop of young and exciting talent to close out a forgettable campaign.

Thanks for the article.

Plata and Nuno Mendes have caught my eye. Yeh Cobral and Wendel also. The team is exciting (if raw) to watch and they remind me of the Lille team from a few season ago before they sold their best players. It would be good...

Thanks for the article.

Plata and Nuno Mendes have caught my eye. Yeh Cobral and Wendel also. The team is exciting (if raw) to watch and they remind me of the Lille team from a few season ago before they sold their best players. It would be good if Sporting could keep a few and actually have a go at the title next season.
The best game I've seen this season was the Sporting Porto draw which was absorbing and Porto will be going for the title when they meet next week so should be worth a watch! I'd expect Porto to win but the experience will be great for the kids.

Great piece on the sporting youth. Maybe one or two will really shine and have a lasting impact on the national team. Glad there’s so much talent

Excellent piece, really hoping as a sporting fan this is the generation that can bring them back. It's fine if they eventually get sold, but I just hope they can utilize them over the next 2-3 season, get some silverware, and move on. Just want...

Excellent piece, really hoping as a sporting fan this is the generation that can bring them back. It's fine if they eventually get sold, but I just hope they can utilize them over the next 2-3 season, get some silverware, and move on. Just want to see sporting back on top!

Read More
Joao Silva
There are no comments posted here yet