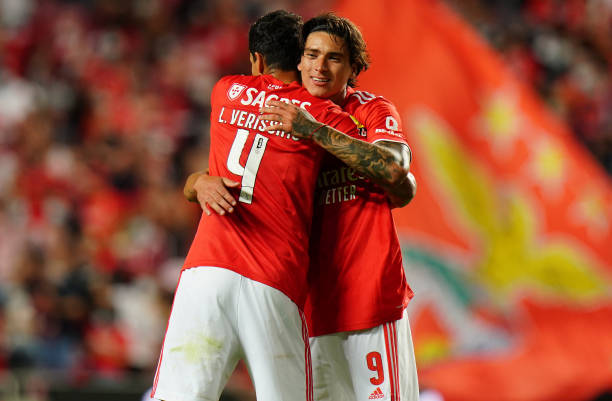 The Eagles, who are yet to drop a single point in these early stages of the campaign, took the lead via Darwin Nuñez, prior to Gustavo Sauer’s equaliser for the visitors. Boavista held onto the pending tie for little less than two minutes after Julian Weigl propelled Benfica back in front, later reinforced by Darwin’s second of the night.

Up north, Porto indulged themselves in a 5-0 victory at home to Moreirense, with Mehdi Taremi and Luis Díaz both on the scoresheet, meanwhile just the one goal, from the penalty spot, was enough to earn Sporting all three points away to high-flying Estoril on Sunday night. To round off the action, Braga left it late to see off Tondela at the quarry.

It turned into a typically memorable evening for Porto against Moreirense at the Estádio do Dragão, kick-started by a Taremi spot-kick in the 34th minute after the Iranian striker was himself fouled inside the box.

Sergio Conceição watched and admired as Fábio Vieira and Luis Díaz combined on two occasions for a second-half brace for the latter, putting Porto 3-0 up by the 65th minute.

With Mateus Pasinato unable to hold onto a fierce shot from range, launched by Vitinha, Taremi was on hand to take advantage and lob the Brazilian goalkeeper on the rebound, making it 4-0 with 20 minutes to go.

The final touches to hearty victory had Pepê’s name on it, tapping in from yet another Fábio Vieira assist and concluding a 5-0 scoreline.

After a midweek horror-show that saw Sporting blitzed at home by Ajax in the UEFA Champions League, it was with a great deal of caution that the Lions approached the meeting away to newly-promoted Estoril, sitting as high as second in the league before the weekend.

Only a strong double-save from Antonio Adán in the 14th minute stopped Sporting from going a goal down away from home before finding themselves unlucky not to take the lead on separate occasions, as Paulinho edged himself closer to netting for ‘the Green and Whites’.

The goal was beginning to look like it wanted nothing to do with the ex-Braga man, striking the post with a curler coming into the second half before seeking redemption with a penalty won in the 64th minute.

Pedro Porro claimed full responsibility from the 12-yard-mark instead, however, making no mistake with his conversion that placed Rúben Amorim’s men in the lead in the 67th minute, proving to be enough to fuel the visitors on their route to a slender victory.

Having commenced their league campaign in flawless fashion, Benfica were tasked with up-keeping their 100% win ratio off the back of a midweek journey to Ukraine, where they drew 0-0 to Dynamo Kiev.

Jorge Jesus’ side got themselves started with an early headed goal by Darwin, supplemented by Diogo Gonçalves’ cross, but the advantage was later undone by a Gustavo Sauer beauty, curling his effort into the top corner from outside of the box on the half-hour mark.

Just two minutes later, however, Benfica were edging themselves ahead as the Eagles took to the air once more for a second of the night, nodded in at the back-post by Julian Weigl.

Darwin added the breathing space required for Benfica to cruise to victory, tapping in Rafa Silva’s low cross and reinforcing the Lisbon giant’s four-point advantage over its ‘Big Three’ rivals.

Braga boss Carlos Carvalhal was starting to feel the pressure after a series of indifferent results for his team, culminating in defeat in the Europa League opener in Belgrade last week.

The experienced coach had said his team were playing well but bemoaned the lack of finishing, and the pattern seemed to be repeating itself as Braga peppered the Tondela goal without making the breakthrough for 80 minutes.

However, a late flurry of goals lifted spirits among the home supporters. Second-half substitute Iuri Medieros got the ball rolling, latching onto a rebound to put the hosts into the lead in the 81st minute.

It was soon 2-0 as captain Ricardo Horta smashed a spectacular angled finish into the top corner, but Tondela hit back through Dadashov’s clever finish. The Arsenalistas were not to be denied however, Iuri scoring his second and Braga’s third to seal the deal.