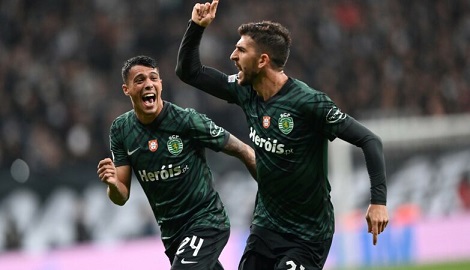 A highly satisfying night for Portuguese clubs in the Champions League on Tuesday saw Sporting win 4-1 against Besiktas in Istanbul – the Lisbon club’s first win in Turkey – and Porto completely outplay AC Milan at the Estádio do Dragão for a 1-0 victory that did not reflect the dominance of the Dragons.

Both teams remain third in their respective groups but have reignited their chances of reaching the knockout stages and are now in a strong position to at least guarantee European football after Christmas via the Europa League.

Meanwhile, on Wednesday night Benfica put up a good fight against one of the tournament favourites, Bayern Munich, at the Estádio da Luz, even forcing Manuel Neuer into two incredible saves to keep the game goalless, before falling to a late flurry of goals from the ruthless Germans. PortuGOAL brings you the match reports and reactions.

After a thrilling first half Sporting led 3-1 thanks to two identical goals by captain Sebastián Coates, heading in after a flicked-on corner, and a coolly converted Pablo Sarabia penalty, also won by a Coates header from a corner. The Uruguayan had been denied a hat-trick by Vida’s flailing arm, and while the referee missed the incident, it was picked up by VAR.

The Lions were also thankful to the video referee for chalking off a magnificent volleyed goal by Alex Teixeira that would have made it 3-2, but the Brazilian was marginally offside. Nevertheless, not all the refereeing decisions went Sporting’s way as Cyle Larin’s header, which briefly made the scores level, stood despite what looked like a clear foul on Matheus Reis.

As an action-packed first half came to an end, fans were finally able to catch their breath. In the second half the chances kept on coming, with both goalkeepers pulling off fine saves and Paulinho hitting the woodwork twice. The Sporting striker finally got his goal in the last minute with a wonderful 25-yard finish that curled over goalkeeper Ersin Destanoglu and flew into the top corner of the net.

Rúben Amorim, Sporting coach: “We got the job done with set pieces, two goals exactly the same and then the penalty was from a Coates header too. The set pieces were well worked. If it happens once it could be luck, if it happens twice you have to give credit to the work done, in this case by Carlos [Fernandes], Adélio [Cândido] and Emanuel [Ferro] (coaching staff) and the players.”

Sebastián Coates, Sporting captain: “I still think we can do better, in defence and attack. But it’s a good victory for everyone and for the team.”

João Palhinha, Sporting midfielder: “We all played a great game; we have been improving in our European games. The team was very compact when defending and we could have scored more goals. I think we played an excellent game and the only thing missing was not scoring more goals.”

Pablo Sarabia, Sporting midfielder: “It was very important to win and get our first three points. We want to win the home game, to get to six points, and then we’ll see what the situation is. It would be a step forwards towards qualification. Our goal is to accumulate points little by little and see where we get to.” 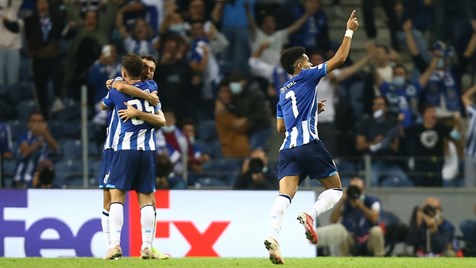 Before last night’s match this season’s Champions League campaign had been a mixed bag for Porto in the toughest of groups. A creditable draw in Madrid when Sérgio Conceição’s team were unlucky not to beat Atletico was followed up by a collapse at home against Liverpool. Victory at home against Milan was therefore essential to keep alive Porto’s hopes of qualifying for the last 16, and the Dragons duly delivered, winning 1-0 thanks to a second-half Luis Díaz goal.

The margin of victory may have been just the single goal but in truth Porto completely outplayed an inoffensive Milan team. Porto’s Mehdi Taremi in particular must be wondering how he failed to find the net. The normally ruthless Iranian striker spurned a handful of presentable chances.

It was left to Luis Díaz to show him how it was done, placing a firm shot low into the corner of the net from the top of the box in the 65th minute after good work on the wing by João Mário. Díaz, who is the most in-form attacking player in Portugal, had also come closest before the goal, hitting the post from 20 yards after a terrific solo run early in the first half. Porto’s 20 efforts at goal throughout the match compared to just 4 for Milan told the story of the match.

Sérgio Conceição, FC Porto coach: “It was not perfect because we were lacking a clinical touch, but the performance was almost perfection. We were an adult, mature team, who understood how we could break down the AC Milan defence. We prepared for the game very well and the players interpreted what we wanted very well. The players deserve praise because they played a superb game, on another European night that we have accustomed our supporters to.”

Sérgio Oliveira, FC Porto midfielder: “Was it atonement for Liverpool? No, because at this club the only thing that matters is getting to the knockout stage. We lost 5-0 [to Liverpool], it was a very heavy defeat, but we had an off-day in that game and we were not the team we usually are. We looked at what went wrong, corrected it and today with a completely different attitude we won, which is what the fans want – to see us winning and getting to the last 16.”

Pepe, Porto defender: “The spirit was always good. It was a very important game for us, to clean our image somewhat from the Liverpool game, because that was not the team we are. Today we fought hard, with a lot of togetherness and incredible solidarity. We respected Milan, but we wanted to win and we did everything to win and when that’s how it is, things tend to go well.” 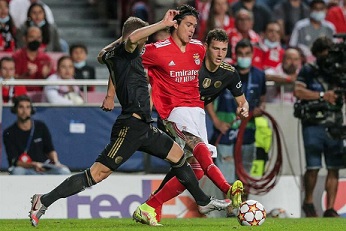 On the back of Benfica’s encouraging 3-0 defeat of Barcelona in September, the Portuguese giants welcomed Bayern to the same venue in Lisbon. And for the majority of the match Jorge Jesus’ team once again showed they have made progress in match-ups against the elite.

Although Bayern hogged the majority of possession and created more scoring chances, Benfica did more than just defend. The lively Darwin Núñez almost scored a similar goal to his strike against Barça, but was denied by Neuer’s fast reactions and strong wrists as the German number one deflected the Uruguayan’s powerful effort over the bar. Neuer produced an even better save in the second half, diving athletically to his right to tip a seemingly goal-bound effort by Diogo Gonçalves over the bar.

At the other end of the pitch Vlachodimos Odysseas was busy showing he is no slouch between the posts himself, pulling of four top-class saves to deny Lewandowski and company. Twice it appeared Bayern had taken the lead and the ball was placed on the centre-spot for Benfica to kick-off again, only for VAR to intervene to frustrate first Lewandowski (handball) then Muller (offside). Bayern also hit the woodwork twice as Benfica’s overworked defence struggled to contain the well-oiled Bundesliga champions.

But the hosts continued to trouble the Germans on the break. An exhilarating, strong, direct run by Yaremchuck saw off Upamecano and put the Ukrainian face to face with Neuer, only for the striker to skew his low shot across goal and narrowly wide.

Bayern showed their desire to take all three points by bringing on winger Gnarby for defender Pavard with 25 minutes remaining, and their attacking intent was soon rewarded as the pressure Benfica had been under all match intensified. In the 70th minute Bayern finally broke through, Leroy Sané’s ferocious free kick leaving Vlachodimos no chance.

From there, it unravelled alarmingly for Benfica, with an Everton own goal and strikes from Lewandowski and Sané all ending up in the Benfica net in a torrid 4-minute spell.

While Benfica can take heart from how they made a match of it for the opening 70 minutes, the cold reality was the final score reflected the gulf in class between the two teams.

“For 75 minutes Benfica were in the match. We were a proper team, until 75 minutes, and we had two great chances, but Neuer is one of the best in the world and he made the difference. When Gnabry came on it changed the game, our left side was broken. I’m frustrated we conceded four goals, we didn’t deserve to.

“Bayern’s fresh players changed the game and after the first goal the team lost its way completely in terms of positioning. I never thought we’d concede four goals, but I have to give credit to Bayern.”

I dont know Paulinho conversion rate but for the amount of chances he gets a game its baffling he doesnt score more. He should have had 3 goals at least by my counts and even worse, he scored on the most difficult one! The heck is wrong with this...

I dont know Paulinho conversion rate but for the amount of chances he gets a game its baffling he doesnt score more. He should have had 3 goals at least by my counts and even worse, he scored on the most difficult one! The heck is wrong with this guy?

I watched Besiktas vs Sporting match as it was played early and that it was broadcasted in my local TV. I'm really happy with the win.

Sadly, FC Porto vs AC Milan match was not broadcasted, so I could not watch it. Other 4 matches were...

I watched Besiktas vs Sporting match as it was played early and that it was broadcasted in my local TV. I'm really happy with the win.

Sadly, FC Porto vs AC Milan match was not broadcasted, so I could not watch it. Other 4 matches were broadcasted and I watched Atletico vs Liverpool match.

Looking at the reply of the FC Porto match winning goal, the fullback Joao Mario played a major part in it. It was from his drilling and crossing that Porto got the goal. This kid has been very impressive from the start of the season. Looks like Portugal is going to have another fine fullback in their books.

Read More
Dhazer
There are no comments posted here yet