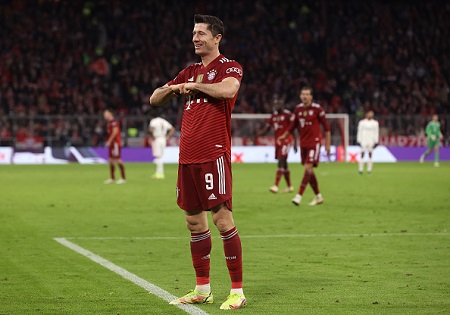 Bayern Munich secured progress to the UEFA Champions League knockout rounds after a convincing 5-2 victory against Benfica. It was another masterclass of attacking football with the final score flattering the visitors.

Goals to Kingsley Coman and Robert Lewandowski established a 2-0 lead at Allianz Arena, Morato getting Benfica back into the contest before Odysseas Vlachodimos saved Lewandowski’s penalty on the stroke of half-time.

Leroy Sané and Lewandowski scored at the start of the second half to give FC Bayern a 4-1 lead, Darwin Núñez providing the travelling support with a faint hope in the 74th minute before Lewandowski's hat-trick ended the contest.

Lewandowski lights it up

Robert Lewandowski celebrated his 100th Champions League appearance with a hat-trick to take his tally in the competition to 81 goals. It could have been more had Odysseas Vlachodimos not saved his weak effort from the penalty spot.

There are few better at scoring goals, but Lewandowski displayed once again that he is a complete player, his assist for Serge Gnabry’s strike a case in point. When he is not finding the net, he is either assisting teammates or occupying defenders which opens space that Bayern can exploit.

Lewandowski’s movement up front alongside Kingsley Coman, Serge Gnabry and Leroy Sané was too much for the Portuguese club to handle.

Benfica showed some glimpses of quality early on, namely through Pizzi who saw a shot blocked and was narrowly offside as Jorge Jesus’ side put the ball past Manuel Neuer.

The writing was on the wall early on at the other end however, Kingsley Coman completely dominating Alejandro Grimaldo. Benfica’s left wing-back simply had no answers, was getting beaten time and time again and it appeared only a matter of time before Coman made it count.

That moment came in the 26th minute, the French winger producing more dazzling footwork before sending in a teasing cross that was converted by Robert Lewandowski.

Benfica's defenders were getting drawn out of position time and time again, leaving gaping holes in the heart of their defence with Bayern capitalising. Five minutes later it was 2-0, Serge Gnabry beating Odysseas Vlachodimos with a deft flick after being set up by Lewandowski.

Morato converted Grimaldo's cross to reduce the deficit, but Benfica were fortunate to head to the break 2-1 down after Vlachodimos saved Lewandowski's weak penalty.

As Bayern have done so often this season, they scored in quick succession to shock and subdue their opponents. Leroy Sané finished into the bottom corner before assisting Lewandowski to give the Bavarians a 4-1 lead.

Darwin Núñez providing the travelling support with a faint hope in the 74th minute after some nice work by João Mário, but once again Benfica's defence was caught out. Neuer's long ball found Lewandowski, the prolific Pole securing his hat-trick to cap off another impressive performance.

Bayern Munich proved they are a far superior side, the 5-2 win following up the 4-0 victory in Lisbon two weeks ago. Even with Benfica’s wing-backs dropping deep, they were still powerless to prevent Bayern’s rampaging attack from constantly creating chances.

Jorge Jesus praised the quality of the German champions: "It's not easy. They almost always score four or five goals. These players create big problems. You have to give it credit. I doubt that there is any team with this intensity of play, when they have the ball and when they don't. They put us to the test, forced us to run a lot."

Despite the two heavy defeats against Bayern Munich, Benfica's hopes of reaching the knockout stages remain in their own hands with two games remaining. They take on Barcelona at Camp Nou before hosting Dynamo Kyiv on the final matchday.

The Benfica boss opted to rest regular starters including Nicolás Otamendi, Julian Weigl and Rafa Silva, who were all a booking away from suspension, for the game at Camp Nou.

Jesus remained optimistic about reaching the next round: "We have to be pragmatic and objective. When it came to the draw, with Bayern and Barcelona, it would be difficult for us to qualify. But given our quality, we are still questioning Barcelona's qualification."

It was excruciating to watch the game. Tactics and talent aside, the opposition players were just so much fitter than the Benfica ones, regarding their pace, stamina and strength. The Benfica management team should consider seriously getting...

It was excruciating to watch the game. Tactics and talent aside, the opposition players were just so much fitter than the Benfica ones, regarding their pace, stamina and strength. The Benfica management team should consider seriously getting every player a gym pass.

What is wrong with Yarumchuk? 3 on 2 fast break while already losing 2-0, Pizzi front and center in acres of space.. and you decide to blast it from some 30 yards out? That was idiotic. Benfica were not poised at all today.. Always rushed and...

What is wrong with Yarumchuk? 3 on 2 fast break while already losing 2-0, Pizzi front and center in acres of space.. and you decide to blast it from some 30 yards out? That was idiotic. Benfica were not poised at all today.. Always rushed and tilted to start counter when 100% team focus was needed to disrupt Bayern, and recover the ball well. Now is not the time to panic. Defeating Barca wasn't a fluke. We have the quality and we'll beat them again but not without the patience and concentration needed for this competition. If there's a will, there will be a way.