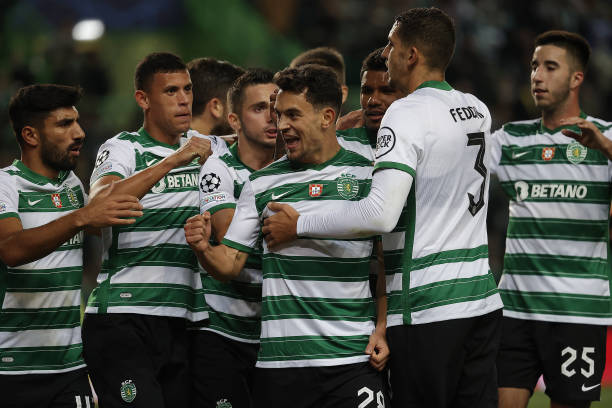 Sporting have kept their hopes of qualifying for the next round of the UEFA Champions League alive with a 4-0 thrashing handed out to Besiktas, this Wednesday.

The Lions, in need of a victory, raced to a 3-0 lead as early as the first half, via goals from Pedro Gonçalves and Paulinho, before Pablo Sarabia’s finishing touch concluded a successful night at the Alvalade against the Turkish league champions.

Sporting’s result came after FC Porto held their own away to A.C. Milan at the San Siro, leading 1-0 prior to a Chancel Mbemba own goal that settled the encounter at 1-1.

With two matchdays remaining in the group stage, Porto are second in Group B, Benfica and Sporting are third in Group E and Group C respectively. All three remain viable options for a bet on the Champions League as they seek a place in the last 16.

Out on Portuguese shores, Sporting were hopeful of doubling up on their European joy a fortnight ago against Besiktas in their bid to make it out of a highly-competitive Group C.

A brace in eight minutes from Pedro Gonçalves played with the Istanbul outfits’ stability, finding a third before the interval through Paulinho. Sarabia clinched all three points with goal number four early in the second half, enabling Sporting to move level on points with second-placed Borussia Dortmund, who lost 3-1 at home to Ajax.

“We can’t fool ourselves in the games against Ajax and Dortmund, because they will be very different. We can’t think we are favourites against Borussia Dortmund, even playing at home. They are a team with a lot of experience in this competition, who are used to facing these moments. We aren’t, but while we’re in it, it won’t be easy for anybody.

“But we know the difference between that game and this one. It will be completely different. We gave up space, especially in the second half, when the Besiktas players had the ball in front of our defence and we can’t allow that against Dortmund.”

Pedro Gonçalves, Sporting forward and man of the match:

“It’s a unique sensation. I never thought I’d get this far. It’s indescribable. I’m very happy, but if it wasn’t for the team I wouldn’t have earned this award. The Dortmund defeat? Of course it gives us a boost, but for now we’re thinking about our next league game, which will be very tough. Afterwards we’ll try and win our next Champions League game, like we always do.”

Porto resumed their campaign hours before in Italy, as Milan played host in a must-not-lose clash for the Rossoneri, currently bottom of Group B. The Dragons got themselves off to a blinding start with a 6th minute opener from Luis Díaz, leaving the Serie A giants on the brink of elimination.

The away side had more for Milan with an Evanilson effort striking the bar in the second half prior to a lifeline falling Stefano Pioli’s way, courtesy of Chancel Mbemba’s own goal to level things in the 61st minute.

The 1-1 draw left 'Blue & Whites' in second place, a point ahead of the trailing Atlético Madrid, but that wasn’t to appease the visitors, with Sérgio Conceição adamant his side deserved more than the sole point.

“To put it simply, we were better than AC Milan in the two games. Tonight we played a great game at the ground of a historical club which has a lot of individual and collective quality.

“We knew they might change their midfield and bring in a more technical player like Brahim Díaz. We stopped them playing and exploited their weaknesses. Our first half was fantastic, we created four or five goal-scoring chances. Milan only had one shot on target, and Diogo pulled off a massive save.

“We deserved to go in at the break with a different scoreline. Milan came out stronger in the second half, but even so we had the chance to make it 0-2 through Evanilson. We conceded the own goal but we didn’t stop looking for the victory. The game was more even after the Milan goal, but up to then we were the better team; it was a shame we didn’t win.”

I managed to watch all 3 games.

Benfica realistically knew they never stood a chance at Bayern's home ground, a heavy defeat was expected, it was surprising that they (Bayern) ​played a strong side, Benfica still should take positives from this...

I managed to watch all 3 games.

Benfica realistically knew they never stood a chance at Bayern's home ground, a heavy defeat was expected, it was surprising that they (Bayern) ​played a strong side, Benfica still should take positives from this loss as they scored 2 goals against them.

Porto only have themselves to blame, so many chances to make it 2-0, could have even been a 3 or 4-0 type of game before the own goal, after that it was a sweaty game for them in the end.

Can Sporting play Beskitas every week? Honestly it was too easy for us, was a shame that Pote couldn't get a hat trick, even though Paulinho still frustrates me to no end, it is a genuine joy to see him score again, and it was very nice to see the fans celebrate his goal more than the rest and for him to receive the send off he got when he got subbed.

Please Paulinho just finish the easy chances already, he could have 15 goals at least by now. Paulinho has 3 goals in the Champions League but if he could finish the simpler chances he could realistically have 6 by now.

Paulinho is the worst finisher I have seen since Nelson Oliveira. Same low football IQ as well, guy is frustrating and Sporting need a replacement him because Pote is a stud! Wow, what a player.

Pedro G hammers his goals into the net, no...

Paulinho is the worst finisher I have seen since Nelson Oliveira. Same low football IQ as well, guy is frustrating and Sporting need a replacement him because Pote is a stud! Wow, what a player.

Pedro G hammers his goals into the net, no hesitation, unselfish as well.

On Paulinho's goal he had 3 team mates in better position but he took the shot (low IQ) and got lucky. It is an interesting dichotomy to have such a pure talent like Pote playing alongside a dummy like Paulinho. This is the perfect example of a "league level talent" vs a "world class talent" in Pote.