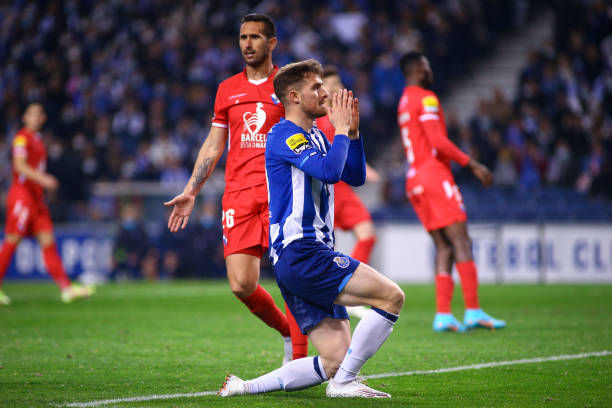 FC Porto have failed to increase their advantage at the top of the Primeira Liga table after being forced to share the spoils at home to ten-man Gil Vicente in a 1-1 showdown, this Sunday.

The visitors had a man red carded just three minutes into the encounter but found themselves a goal up, nevertheless, through key man Fran Navarro.

Porto equalised soon after in the second half via Evanilson’s tap-in, but the inability to follow up the Brazilian’s effort meant the Dragons could only maintain their six-point advantage over second-placed Sporting.

Elsewhere, there was an important win registered by Benfica, at home to Vitória de Guimarães, as a goal from Gonçalo Ramos and a Darwin Nuñez brace gave the Eagles a 3-0 victory, leaving them just four points behind second place.

In the comfort of their own home, Benfica welcomed Vitória to the Estádio da Luz this Sunday with the prospect of closing in on rivals Sporting, momentarily seven points ahead of the Eagles.

Two great opportunities for Oscar Estupiñan to break the deadlock served as a wake-up call for Benfica to get their game in gear, following up the early efforts with a 23rd minute opener from Gonçalo Ramos.

After assisting the first goal, right-back Gilberto was also at the heart of Benfica’s second goal of the night, setting up Darwin for the Uruguayan’s header in the 37th minute. The striker left the game beyond much doubt with goal number three from the penalty spot, won by his strike partner Gonçalo Ramos in the 50th minute.

As Benfica cruised to a 3-0 victory, there was a touching moment dedicated to Ukraine’s Roman Yaremchuk, treated to a standing ovation and the captain’s armband as he came on for the occasion.

Much like Benfica before them, Porto were also left sharpening their cutlery after Sporting’s slip up on Saturday evening to Marítimo, with Sérgio Conceição’s men keen to increase their lead at the top to eight points

The encounter had the supporters off their seat from the get-go as Vitor Carvalho saw a three-minute red card reduce his team’s numbers to ten men after a foul on Evanilson.

Gil Vicente stood their ground in a goalless first half but their stance came close to crumbling in the early exchanges of the second period with Pepê striking the post shortly after a guilt-edged opportunity missed by Mehdi Taremi, with the goalkeeper beaten.

The worries loomed large at the Dragão after ten-man Gil Vicente had their noses in front via Fran Navarro, working his way into the danger zone in remarkable fashion, but Porto, in the 66th minute, were quick to equalise via Evanilson.

Porto began to close in on a winner as the clock ticked on, going closest via Taremi and Toni Martínez, both with dangerous efforts crashing against the bar. The decisive touch evaded the league leaders, however, leaving them unable to take advantage of Sporting’s result with a draw of their own at home to Gil Vicente.

Why all the nonsense at the end of Porto matches? Doesnt matter the opponent.