Masterful Vitinha drives Porto a step closer to the title 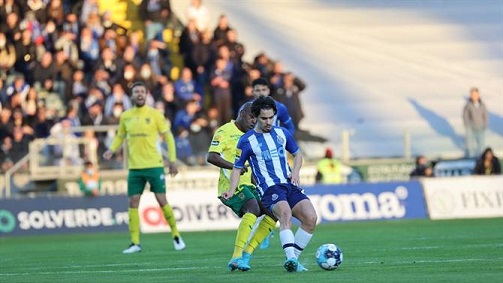 Having seen their lead at the top of the table cut to three points on Saturday night, Porto responded in commanding fashion with a 4-2 victory away at in-form Paços de Ferreira.

Evanilson and Mehdi Taremi were among the goals again, the two front men forming a lethal partnership in recent weeks, but the star of the show was midfield schemer Vitinha. “Today he is a complete midfielder, his presence fills the pitch,” said Porto coach Sérgio Conceição in the post-match press conference.

Paços came into the match on a run of just one defeat in their last seven matches under new coach César Peixoto, and Porto had won at this venue only once in the previous five seasons. Sporting’s 2-0 victory over Arouca the night before will likely have increased the anxiety levels among the Portistas.

However, the Dragons have reacted well to pressure this season, and a fast start suggested they would do so again. It was no surprise when early pressure paid off. Paços goalkeeper André Ferreira did well to initially deny Pepê, but the attack was kept alive by Taremi and Wendell’s pinpoint cross left Pepê with an easy headed finish into the net.

After 30 minutes of Porto domination, Paços grabbed a surprise equaliser when a teasing cross by Antunes was fired into the net by Juan Delgado. Porto were soon back in front though, as excellent approach play by Taremi allowed Evanilson to finish from close range.

The two combined again in the 52nd minute, Taremi providing his 12th assist in 24 Liga matches, for his strike partner to find the net and elevate the score to 3-1. It was soon 4-1 to Porto as the roles were reversed, Evanilson pouncing on a loose ball and teeing up Taremi, the Iranian making no mistake.

Paços briefly threatened to get back into the game as another terrific cross by Antunes allowed former Benfica midfielder Nico Gaitán to head in from close range, but in reality Porto’s victory was never in doubt.

Porto remain 6 points clear at the top of the table, with 9 matches remaining. Online gamers who are fans of Portuguese football who enjoy live streaming betting sites will surely be more and more inclined to bet on the Dragons to become 2021/22 champions of Portugal.

Despite the win, the ever-demanding Conceição was not pleased with the defensive showing of his team, but acknowledged his players had put in a good shift. “I prefer to win 2-0 than 4-2,” he commented. “But it was a positive game, with moments of brilliance from our team.”

That was especially true of Vítor Ferreira, known in the football world as Vitinha, and who is in the running to win the Primeira Liga Player of the Season award. The Portugal U21 international was involved in all four Porto goals and dominated the middle of the pitch.

“It’s normal that people see Vitinha standing out with his assists or ball recoveries,” added Conceição. “He’s in excellent form. He’s a fabulous player, with technique and quality, he’s improved his long-range passing, and the timing of when to release the ball. At the moment he is a complete midfielder. We have a player whose presence fills the pitch.”

The Blue and Whites have now gone 53 matches unbeaten in the Primeira Liga - just two short of a club record - and it is difficult to see any other scenario than a championship title for Porto in May.