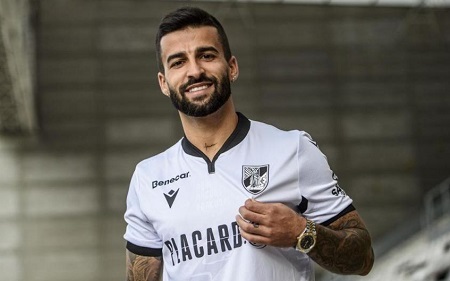 Vitória de Guimarães advanced to the Europa Conference League third qualifying round after a 0-0 draw against Puskás Akadémia. The second leg was a match to forget, the hosts lacking the sufficient quality to trouble Bruno Varela who was untested in Hungary.

The tie was decided in the first leg at Estádio D. Afonso Henriques where Os Conquistadores secured a 3-0 victory. Tiago Silva continues to impress for the Portuguese club who face Hajduk Split in Croatia next week.

Vitória de Guimarães gave away a number of dangerous free kicks in the opening stages but Puskás were unable to take advantage.

The Portuguese club fashioned their first chance in the 20th minute, Tiago Silva and Rúben Lameiras combining well on a set piece before Silva shot wide.

Artem Favorov fired a free kick over the bar as Puskás continually attacked André Amaro and Miguel Maga. Favorov had another chance in the 33rd minute when he headed a corner over the bar.

Guimarães finished the first half on top with Lameiras surging in the the 18-yard box but unable to keep his shot down. Their best chance came on the stroke of half time, Jota driving forward and cutting the ball back to Tiago Silva who dragged his effort narrowly wide.

Puskás started the second half well, a corner evading everyone in the 6-yard box before bouncing out of play. Patrizio Stronati headed a free kick wide in the 56th minute before the substitutions started to flow.

Moreno replaced André Silva with Anderson Silva up front and Jota made way for Nélson Luz on the left wing.

Anderson Silva was immediately involved when his shot was blocked, the ball falling kindly for Tiago Silva who unleashed a low drive that forced a save from Tamás Markek.

The game concluded the way it started, a lack of quality in the attacking third where Puskás’ Jakov Puljić headed a corner over the bar from point blank range.

Puskás Akadémia are a poor side that were deservedly dumped out of the Conference League at the first attempt. Unable to create a shot on target at home in the second leg, they never looked like overturning the 3-0 deficit.

Guimarães are going to face tougher challenges in the coming weeks which will paint a clearer picture of their ability. Vitória's defence is going to come under pressure against attacks that have much more ability than Puskás.

Moreno made two enforced changes to the side that started the first leg, Jorge Fernandes replaced by 19-year-old André Amaro in central defence and 22-year-old midfielder coming in for André Almeida.

Bruno Gaspar, Afonso Freitas, Tomás Händel and Nicolas Janvier joined Fernandes and Almeida on the injury list, although Almeida's absence could also be a sign that his departure from the club is imminent.

Abdul Mumin looked strong in central defence and Jota was man of the match in the first leg. André Amaro had some promising moments and will benefit from more playing time next to Mumin.

Tiago Silva had the biggest influence over the two legs and was the best player on the pitch in Hungary. The 29-year-old midfielder was repeatedly fouled and found himself on the end of a number of heavy challenges.

Silva’s elusiveness, skill and guile were too much for the Hungarian club to handle and he went closest to scoring on two occasions. He is going to be an extremely important player for Os Conquistadores this season.

Guimarães travel to Croatia next week where they take on Hajduk Split in the third qualifying round first leg. Vitória are joined by Gil Vicente in the third round, the Barcelos club travelling to Latvia where they face Riga in the first leg.