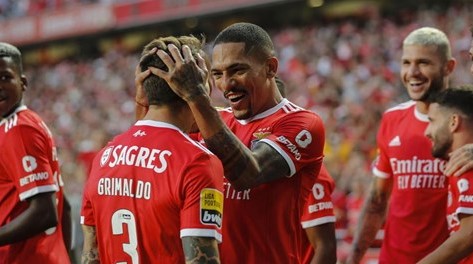 The Roger Schmidt bandwagon rolls on. After 5/5 wins in preseason, Benfica followed up their 4-1 win over Midtjylland in the Champions League in midweek with a 4-0 drubbing of Arouca in the inaugural match of the 2022/23 Primeira Liga season.

First-half goals from Gilberto, Rafa Silva and Enzo Fernández, along with a red card for Arouca’s Mateus Quaresma meant the match was over by half time at 3-0. Rafa added a late fourth to send another big crowd at the Estádio da Luz home happy.

A yellow card in the opening seconds of the match for Jerome Opoku suggested it could be a long night for Arouca, and Benfica soon opened up their goal account for the new domestic season with a beautifully worked 7th-minute strike.

João Mário and Rafa Silva combined cleverly to set Grimaldo free, the Spanish left-back producing a stupendous cross on the run that Gilberto met with a thumping header into the back of the net.

Mário then got his head to a Gilberto cross, but his weak effort was easily gathered by Arouca goalkeeper Arruabarrena.

The visitors gradually grew into the game, showing no fear and putting some neat passing moves together. A quick breakaway on 20 minutes saw the ball ricochet to Mújica close to goal but the striker could not get his shot away.

João Mário limped off injured shortly after the half hour mark after a heavy challenge from Arsénio, being replaced by Chiquinho.

With Benfica lacking the dynamism of their recent matches, Arouca continued to ask questions of the defence, a promising burst through the middle by Antony unceremoniously halted by Otamendi, with referee Manuel Mota waving away claims for a foul.

But Arouca’s hopes of taking anything from the match were destroyed in a disastrous five minutes for the northern club just before half time.

Some loose defending was taken full advantage of by Rafa, who jinked his way into the box, his pass causing panic among the Arouca defenders with the ball looping in the air to Gonçalo Ramos, who headed onto the bar, with Rafa heading the rebound into the net from point-blank range.

Things got worse for Arouca when more suspect defending allowed Rafa to burst towards goal again, with Quaresma bringing him down as he approached the area. Worse than the free-kick in a dangerous position was the subsequent VAR check which resulted in the defender being sent off, an extremely harsh decision.

The free kick came to nothing but Benfica now smelt blood and a third goal duly arrived before the break. A cross was only half cleared by the Arouca defence, with Enzo Fernández smacking a volley through Arruabarrena’s legs into the net. It was the impressive Argentine’s second goal in two games.

Benfica took their foot off the pedal in the second half and the many substitutions made by both teams also contributed to a forgettable second forty-five minutes, only enlivened by a late goal from Rafa, finishing from close range after getting on the end of a low cross by substitute Alexander Bah.

Benfica only made two major signings in the summer, but Enzo Fernández and David Neres have already shown their worth; both were outstanding against Midtjylland on Tuesday and the Argentine was again excellent tonight. He is the sort of midfielder whose dynamism and intelligence allows him to run a game.

Several players who were at the club last year seem to have gained a new lease of life under Schmidt, none more so than Rafa Silva. The Portuguese forward has spent most of his career playing wide, but a new more central role is getting the best out of Rafa, keeping him constantly connected to the play. Likewise, the decision to play Ramos as an out-and-out striker has clearly benefited the U21 international, compared to the more withdrawn role he fulfilled last season, and João Mário has refound his mojo after a poor second half of last season.

Although it is too early to definitively say Benfica are the real deal in 2022/23 – the Eagles have had two relatively mild tests thus far – all the signs are that the team are heading in the right direction.

Opoku - one to watch

It may seem strange to say after being thumped 4-0, but Arouca can take positives from tonight too. After conceding early, the visitors competed well for half and hour and it appeared Benfica would have to stretch themselves to the limit to get the three points. The red card ended Arouca’s chances of causing an upset though, and some loose defending just before half time proved costly.

The acquisition of Jerome Opoku seems a smart piece of business. The giant English centre-back looked comfortable in the most challenging of initial tests in Portugal and he did not let the yellow card he picked up in the very first minute affect him, making a series of timely interceptions and distributing the ball well.

At the other end of the pitch the experienced Arsénio and Brazilian youngster Antony showed some enterprise, but the lack of any cutting edge is worrying. Arouca did not force Vlachodimos into one serious save all match, although Armando Evangelista’s team will expect that to be different against less powerful opposition.