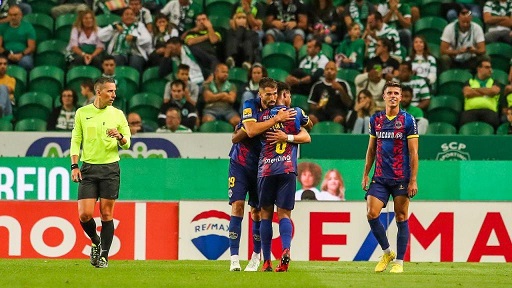 It was a memorable night at the Alvalade stadium for Chaves as the team from the northern tip of Portugal obtained a well-deserved 2-0 win over Sporting thanks to second-half goals by Steven Vitória and Juninho.

After dominating the first half, albeit with a distinct lack of a cutting edge, the hosts were surprised by a far more adventurous Chaves side after the break and Sporting’s game fell apart after conceding two quickfire goals.

Sporting made three changes from the defeat against Porto at the Estádio do Dragão last weekend with Ricardo Esgaio coming in for the suspended Pedro Porro, and Rochinha and Nuno Santos replacing Morita and Matheus Reis. Chaves made only one change but it was a significant one, with captain and talisman João Teixeira out suspended, replaced by Guima.

The first half took on a predictable pattern with overwhelming favourites Sporting dominating possession and probing for an opening.

Pote came close to an early breakthrough as his shot from a central position outside the box beat goalkeeper Paulo Vítor but hit the post. The rebound struck the back of the diving Vítor but fortunately for the Transmontanos bounced out of play for a corner and not into the net.

Rochinha then had a weak header easily saved before the Pote-Vítor battle resumed, the lively attacking midfielder forcing the Chaves number one to stretch to block his shot.

It was one-way traffic, Chaves barely venturing out of their own half, but the Lions were lacking penetration to hurt their visitors. Rochinha’s powerful effort flew off target and Gonçalo Inácio went close from a corner, his header just drifting wide, but the interval arrived with the match still goalless.

The second half started with the introduction of three substitutes, Matheus Reis replacing Neto for Sporting, while for Chaves Bernardo Sousa and Luís Carlos made way for Obiora and Juninho. And it was the latter especially who had a big effect as the match opened up.

But Chaves were now far more ambitious, several counter-attacks and the super aggressive Juninho causing the home defenders problems. From one counter Batxi threaded a lovely through ball to Hector leaving him one-on-one with Adán, the Spanish goalkeeper spreading himself well to save Sporting.

But it was a brief stay of execution for the Green and Whites who were hit with two goals in three minutes. More trickery and tenacity by Juninho won a free kick wide on the right, and Batxi’s delivery was met by the stooping Steven Vitória, the Chaves captain producing a remarkable header from just inside the box that looped into the top corner.

Things went from bad to worse for Sporting as a long ball from Kevin set Juninho racing clear, the Brazilian keeping his head to dribble past Adán and slot into the empty net from 18 yards.

There was still half an hour of the match to go, but what followed will be deeply worrying for Sporting fans. The players completely lost their way, with coach Amorim also clueless as to how to change things, throwing on St. Juste for Ugarte, Rodrigo Ribeiro for Esgaio and instructing Coates to play as the centre-forward, all to little effect.

Sporting’s stodgy play resulted in a series of harmless crosses being aimlessly swung into the box, the vast majority of which Vítor had no problem dealing with. The hosts eventually fashioned two chances in the closing minutes but Nuno Santos’ shot was blocked and Ribeiro’s effort was too close to the goalkeeper.

On this evidence, Sporting will be no way near in contention for the Primeira Liga title in 2022/23, the drop-off in quality following the departures of Pablo Sarabia, João Palhinha and Matheus Nunes, and the desperately obvious lack of a No.9 leaving the team unrecognisable from the well-organised and efficient unit of the last two years.

Long before the final whistle was blown it was clear Chaves would be taking home all three points, very much deserved for an extremely well-marshalled defensive effort when needed, and for taking full advantage of their chances when they risked more in the second half.

In scenes not often seen in Portuguese stadiums, the away supporters were extremely vocal throughout the ninety minutes, and the couple of hundred or so Chaves fans (who made the 900 km round trip!) were in full party mode as the full-time whistle went. Os Valentes believe they belong in the top flight, and from what we saw tonight the newly promoted team should have no problem remaining in the Bwin Liga this season.

By Tom Kundert at the Alvalade stadium

Daniel
This comment was minimized by the moderator on the site

Trincão one more flop which was so expensive as Vinagre. bad transfers by Sporting

Daniel
There are no comments posted here yet