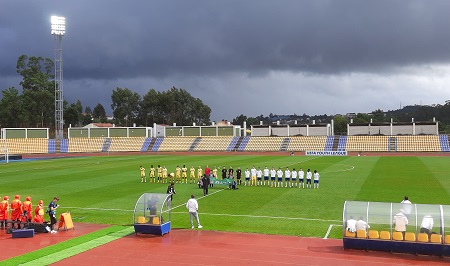 Porto got their first win in the UEFA Youth League after beating Club Brugge 2-1 at Estádio Dr. Jorge Sampaio.

Martim Fernandes assisted Jorge Meireles for the opening goal in the 8th minute, Keano Van Rafelghem setting up Denzel De Roeve for the equaliser in the 25th minute.

Porto regained the lead five minutes later when Rui Monteiro won a penalty which was converted by Fernandes, Capucho's side holding on under late pressure to take all three points.

Porto got off to a fast start in Pedroso and took the lead in the 8th minute. A great pass from Martim Fernandes split the defence, Jorge Meireles capitalising on hesitation from Kiany Vroman, rounding the keeper and slotting into an empty net.

Fernandes then found himself in the box where his left footed shot went well wide. Club Brugge were displaying nervousness in defence with the young Dragons clearly the superior side.

The Belgian club were unable to get out of their own half but that changed after 20 minutes when they got a foothold in the game. Keano Van Rafelghem barged through Porto’s defence but couldn’t direct his shot on target.

Van Rafelghem was proving to be the catalyst for the visitors and played a big role in the equaliser in the 25th minute. He went on another run and released Denzel De Roeve who beat Gonçalo Ribeiro.

Porto back on top

Rui Monteiro beat a number of defenders and surged into the box, Sem Audoor making a clumsy challenge to concede a penalty. Fernandes stepped up and slotted the spot kick into the bottom corner.

Capucho’s side went close to extending their lead in the 40th minute António Ribeiro, heading Umaro Candé’s free kick onto the post.

Vroman was busy to start the second half, palming Meireles’ shot to Candé who forced another save from the keeper.

Midfielder Bruno Pires then picked up an injury and was replaced by Ussumane Djaló.

The visitors began to increase the pressure, Talbi’s free kick punched away by Ribeiro before Laurens Goemare made way for Arne Engels. The chances kept coming with Vermant heading over the bar, Joel Ordonez narrowly missing the top corner and Talbi unable to keep his effort down.

Joel Carvalho missed a great chance to put Porto clear in the 90th minute before Brugge finished with a flurry. They had numerous chances from set pieces, all coming from Engels, their best chance seeing Vermant head a corner over the bar.

Stars for the future

Porto’s squad is full of talented players that have represented Portugal’s youth teams.

Four were in Portugal's squad that reached the U17 European Championship semi-finals in Israel. Right-back Martim Fernandes started and played a role in both goals, goalkeeper Diogo Fernandes and centre back Luís Gomes unused substitutes with midfielder Ussumane Djaló coming off the bench.

Centre back Gabriel Brás has captained Portugal at U18 level while midfielder Vasco Sousa recently made his debut for Rui Jorge’s U21 side in the 9-0 win in Liechtenstein.

They have a long way to go to emulate the side that won the 2018/19 UEFA Youth League. Players to emerge from that squad include Diogo Costa, Diogo Leite, João Mário, Romário Baró, Vitinha, Fábio Vieira and Fábio Silva.