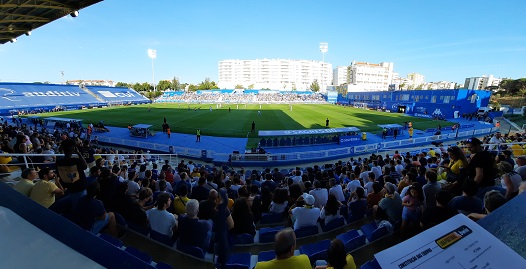 A lively game on the Lisbon coast this afternoon saw Estoril and Porto share the points after a hard-fought draw at the António Coimbra da Mota stadium.

Estoril went into the break leading thanks to Tiago Gouveia’s goal just before the break. Despite intense Porto pressure, the hosts held out until stoppage time when Mehdi Taremi equalised from the penalty spot.

Porto coach Sérgio Conceição shook things up after the shock 4-0 home defeat to Club Brugge in the Champions League in midweek, making four changes. André Franco, Rodrigo Conceição, Fábio Cardoso and Mehdi Taremi coming into the line-up, the first two for their first starts in a Porto shirt.

It was a cagey opening period with neither goalkeeper troubled, Estoril fashioning the first chance when Rodrigo Martins picked up the ball 20 yards out, made room for a shot and whistled his effort not far wide.

The game exploded into life on the half-hour mark. Again it the home team that caused danger, Ndiaye stealing the ball deep in Porto territory and playing in Erison Danilo whose shot was well saved by Diogo Costa. The rebound fell to Tiago Gouveia who hit a fierce left-foot effort that thudded against the post.

Gouveia was in the mood for it as he soon picked up the ball in the left flank, showed some wonderful skill and audacity to jink between two Porto defenders and force Costa into another attentive save.

Porto came roaring back, pushing Estoril back with several dangerous crosses into the box, and the visitors had the ball in the net twice in two minutes, but both “goals” were ruled out for offside. Firstly it was Eustáquio who was in an illegal position to save Pedro Álvaro’s blushes and an own goal, and almost immediately Zaidu played a neat one-two with Taremi and scored but he had also strayed offside.

The Dragons were now on top but it was Estoril who would take the lead. Captain Joãozinho played a long cross-field ball, Gouveia’s first touch appeared to take him too wide but from the tightest of angles he fired a low hard shot past Costa, whose attempted save with his outstretched hand could not prevent the ball rolling into the net.

At this point Porto were looking at the possibility of falling 6 points behind Benfica going into the international break. Even at this early stage of the season, the live betting odds would start to heavily favour the Eagles to win their first Primeira Liga since 2018/19.

Last season Porto came from two goals down to win at this venue and an expected all-out attacking effort to overturn the result appeared on the cards as Taremi’s brilliant 50th-minute half volley crashed off the top of the bar.

But Estoril almost made it 2-0 after a fantastic run and cross by Rodrigo Martins set up Francisco Geraldes, but Costa made a fine save from his close-range shot.

Substitute Galeno’s tricky feet then lay the ball off for Taremi. The Iranian took his marker out of the equation with a clever shimmy but his shot was blocked by a desperate Joãozinho lunge. Fábio Cardoso then headed just wide.

Galeno was next to try his luck as Porto’s pressing intensified and the Blue and Whites were given a boost in the 76th minutes as Ndiaye’s foul on Veron earned the midfielder his second yellow card and subsequent red.

From the resulting free kick Eustáquio’s delivery was headed against the post by Veron.

The chances for Porto were coming thick and fast, Toni Martínez racing into the box and drawing a fine save out of Dani Figueira. Uribe was next to try his luck, his deflected shot looping over the bar and onto the roof of the net.

Time was running out for an increasingly desperate Porto, although when the electronic board was raised signalling 7 minutes of stoppage time, the exasperated Estoril coach Nélson Veríssimo threw his arms out wide in protest.

And the first five minutes of that stoppage time was interrupted by a VAR check, the referee coming to the conclusion that Joãozinho’s handball in the box merited a penalty to Porto, after the play had originally been called offside.

Taremi showed nerves of steel to thump in the spot kick.

Porto soon had the chance to nick a dramatic win when Galeno’s shot was parried by Figueira and Taremi just failed to wrap his foot round the ball for the equaliser.

Ten-man Estoril managed to keep the ball far from their goal for the last couple of minutes as the points were shared after a night of riveting entertainment.

The single point was enough for Estoril to climb one place into seventh while Porto remain third in the Primeira Liga table going into the international break.

By Tom Kundert at the Estádio António Coimbra da Mota

Porto should send some nice bottles of Vinho do Porto to the refs for the point.

BennyFromBrooklyn
There are no comments posted here yet