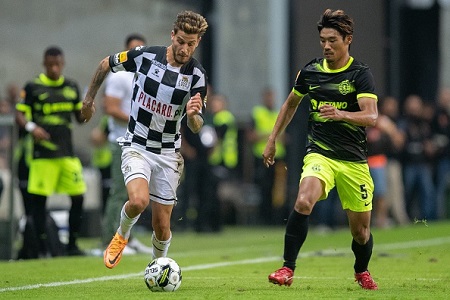 Boavista continued their strong start to the season with a 2-1 win against Sporting Clube de Portugal. It was an action packed first half that ended with Bruno Lourenço putting the Panthers ahead with a spectacular volley.

Sporting fought back and equalised after Nuno Santos’ rabona cross was headed home by Marcus Edwards. The Lions couldn’t keep it up however, Ricardo Esgaio coming off the bench and conceding a penalty that Lourenço calmly converted.

It was an electric start in Porto with Sporting’s front three looking full of confidence, particularly Marcus Edwards and Francisco Trincão.

Petit’s tactics were abundantly clear, release Kenji Gorré at every opportunity and use the winger’s speed against Gonçalo Inácio.

Trincão was heavily involved early on with a free kick deflected over the bar, his header then deflected wide after César spilled a cross. Pote stabbed the ball into the net but the travelling supporters had to halt their celebrations due to VAR spotting a player offside.

Boavista weathered the storm and started to exert some pressure and it was no surprise where they made inroads, Gorré broke clear and played a great pass behind Sporting’s defence where Bruno Lourenço’s shot cannoned off the bar.

Sporting fought back and had a great chance to equalise when their corner wasn’t cleared, Trincão the next player to see his effort hit the post.

The game was swinging back and forth and it was Panthers who opened the scoring in added time. Gorré went on a great run, beating Inácio, Sebastián Coates and Inácio again before his shot was blocked, the ball popping up to Lourenço who produced a perfect volley off the post and into the net.

Nuno Santos was heavily involved at the start of the second half, his deflected cross forcing a smart save from César. Pedro Porro then saw his shot take a deflection before it was comfortably saved by César.

Gorré continued to be a one-man wrecking machine, going on a long solo run before his shot was deflected wide.

Santos was in no mood to let Gorré steal the spotlight however, producing an outrageous piece of skill to instigate Sporting’s equalizer. He bamboozled Pedro Malheiro before producing a rabona cross that picked out Marcus Edwards who headed home from close range.

Petit made two changes in the 68th minute with Ricardo Mangas and Salvador Agra replacing Rodrigo Abascal and Gorré. Sebastián Coates then picked an injury and was replaced by Ricardo Esgaio.

Sporting appeared to be running out of energy and ideas, Rúben Amorim making two changes in the 75th minute, Arthur Gomes and Paulinho coming on for Santos and Trincão. 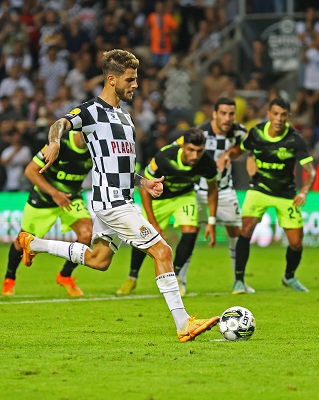 Petit brought on Martim Tavares for Róbert Bozeník, the 18-year-old striker fresh off his match winning goal in Arouca. He didn’t have to wait long to make an impact.

He received Lourenço’s cross and took a touch before sucking Esgaio into a silly foul, referee João Pedro Pinheiro pointing to the spot. Lourenço stepped up and held his nerve in front of the Panteras Negras, sending the ball over the diving Adán.

Rochina replaced Hidemasa Morita as Amorim went for broke but it was too late, Boavista holding on to continue their strong start to the season.

Boasvista won their opening two games before losing 2-0 at Casa Pia and 3-0 against Benfica. They bounced back with wins against Paços de Ferreira and Arouca and made it three straight against Sporting CP.

Petit has been consistent with his tactics and been rewarded for bringing in and sticking with Vincent Sasso, Bruno Onyemaechi, Bruno Lourenço and Robert Bozenik.

He deserves a lot of credit for overcoming the sales of Jackson Porozo, Yanis Hamache, Nathan, Gustavo Sauer and Petar Musa alongside the injury to Yusupha Njie who hasn't appeared since scoring in Boavista’s first two victories of the season.

Sporting overcame the 3-0 defeat in Porto and 2-0 loss against Chaves with four straight wins, including impressive victories in the Champions League after winning 3-0 in Frankfurt and 2-0 against Tottenham.

Rúben Amorim’s side have been renowned for their defensive stability, but conceding 10 goals in seven Primeira Liga games is a long way from the defensive displays the Lions frequently displayed when they won the title two seasons ago.

Sporting currently share a lot of similarities with Porto, namely financial issues that have seen them sell their best players and spend a fraction of their fees on replacements.

I'm glad that Portugoal is kind of calling out Esgaio. He just isn't good enough. I get that we're thin right now, and he's just a squad player. But, we could and need to do better.

I think everyone knows Esgaio is a squad player at Sporting and nothing more. He was thrown into a position he is not equipped for last night, but he could have made exactly the same mistake at right back.

Depth really is a huge problem for all 3 big clubs. Think thats visible. Gorre though was so impressive fast strong etc Lourenco also had a top game. Benfica and Braga will look to pull away now. And Braga have Porto next thats a 6 pointer! As a...

Depth really is a huge problem for all 3 big clubs. Think thats visible. Gorre though was so impressive fast strong etc Lourenco also had a top game. Benfica and Braga will look to pull away now. And Braga have Porto next thats a 6 pointer! As a Benfiquista I want Benfica on top with as much gap as possible but would be nice to see Braga fighting all season long.

Read More
Bryan Cabral
There are no comments posted here yet