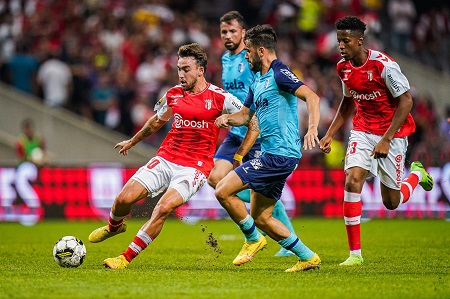 Braga made it eight straight wins after two goals in the final 10 minutes secured a 2-0 victory against Vizela.

Vitinha's deflected shot put them ahead in the 83rd minute before the striker assisted Ricardo Horta in added time. Matheus came up big at the other end, the keeper playing his part in the win with two sharp saves.

The victory sees Artur Jorge’s side keep pace with Benfica at the top of the table, Braga with the most potent attack in the Primeira Liga.

Braga came out firing on all cylinders, Ricardo Horta’s effort going wide before a shot from Abel Ruiz was deflected away from danger.

Referee André Narciso was intent on stealing the spotlight after booking Raphael Guzzo, André Horta and Anderson inside the opening 15 minutes.

Ricardo Horta scuffed a shot wide before a rapid counter attack ended with Medeiros unable to keep a great chance down.

Vizela’s forays into Braga’s half were few and far between with Matheus enjoying a quiet evening. Álvaro Pacheco made an early substitution with Samú replacing Guzzo.

The change seemed to inspire the visitors who went into the break with some confidence. Alex Méndez tried his luck from distance on two occasions, Samú’s shot blocked before the midfielder fired straight at Matheus.

Pacheco made two changes at the break with Carlos Isaac and Nuno Moreira introduced for Igor Julião and Zohi.

Braga started the second half like the first, crosses fizzing across the face of goal and Ricardo Horta’s shot saved by Buntic. Simon Banza then did well to send Ruiz through on goal, Vizela’s keeper coming up big in a 1 on 1 situation with the Spanish striker.

Vizela were showing no signs of rolling over and were looking threatening on the break. Méndez sent Milutin Osmajic through but the ball got tangled up in his feet, Samú then squeezing the ball under Matheus who was spared the embarrassment thanks to an offside call.

Artur Jorge had seen enough and made a triple switch in the 61st minute when André Castro, Álvaro Djaló and Vitinha replacing Uroš Račić, Medeiros and Ruiz.

Both teams were searching for three points after Kiko Bondoso raced clear and shot wide before Banza was unable to turn Djaló’s cross home.

Matheus was called into action in the 74th minute, making a great save after Ivanildo Fernandes headed a corner towards his goal.

It proved to be an important moment in the match with Braga taking the lead nine minutes later. Vitinha stepped inside Isaac and tried his luck, the ball taking a slight deflection off the right-back which was enough to take it past Buntic.

Banza immediately made way for Jean-Baptiste Gorby before Matheus was called into action once again. Nuno Moreira’s cross was met by Osmajic at the back post, his header clawed off the line by Braga’s Brazilian shot stopper.

Samú had his shot blocked before Braga secured the three points, Vitinha releasing Ricardo Horta who smashed the ball into the top corner from outside the box.

Braga’s last three home wins have seen them take the lead inside the final 15 minutes. Vítor Tormena scored at the death in the 1-0 win against Guimarães, Vitinha netted the winner in the 77th minute against Union Berlin and opened the scoring in the 83rd minute against Vizela.

Alongside the ability to blow teams away, Artur Jorge’s side are showing a great ability to get it done late, especially at the Quarry where the feel good factor is as high as it has ever been.

Vitinha getting it done

Simon Banza received the awards for best striker and player of the month in August, but Vitinha has been the one to step up in September. The 22-year-old received a rousing welcome as he came off the bench and duly rewarded the home crowd with the opening goal and assist for Ricardo Horta’s sealer.

Artur Jorge was full of praise for his striker after the victory against Union Berlin and rightly so, saying he has “very special characteristics”, and is “one of the few Portuguese strikers in the Primeira Liga who is a pure '9', extremely combative and who gives us comfort with ability to finish. Evolution will come with age and maturity and he will become more capable and more of a spearhead”.

No need to panic for Vizela

Vizela’s results since the opening day 1-0 win at Rio Ave don’t make pretty reading. They have now lost three straight and sit one point above Famalicão who occupy the relegation play-off position.

I don’t think there is any need to panic and I don’t anticipate the power brokers discussing Álvaro Pacheco’s future. Their performances have been better than the results suggest and they remain a tough side to beat.

Probably the best game in the Liga I have seen so far this season. End to end action and Matheus must surely be recognized as one of the best shot-stoppers in the league after this game.