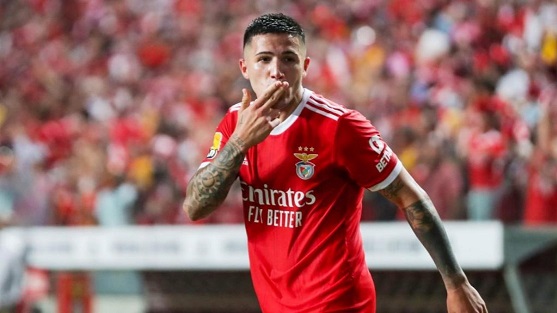 Right, where were we? With the 2022 World Cup taking everyone’s minds off domestic football for a good two months, you’d be forgiven for not being totally up to speed with everything that’s happened behind the scenes in the Portuguese top flight.

With a clear run towards the end of the season ahead of us - and with the small matter of a January transfer window already well under way - we’re here to bring you up to speed with all the main stories, and some you might have missed, including info to help you with everyday winning tips, from Portuguese clubs in recent weeks.

The story that continues to dominate headlines is of course the transfer saga that has seen Benfica’s Enzo Fernández heavily linked with a big money move to English Premier League side Chelsea. For Fernández the World Cup was the stuff of dreams, not only winning the coveted title, being instrumental in a team that helped the talismanic Lionel Messi to the trophy he craved most, and showing his supreme talent on the biggest stage at just 21 years old, but he also took home a personal accolade: Young Player of the Tournament, a trophy previously won by the likes of Kylian Mbappé, Paul Pogba, Thomas Müller, Marc Overmars, Franz Beckenbauer, and Pelé, to name a few.

World Cup glory was just another boost to Fernández’s rapidly growing international profile after being instrumental not only to Benfica’s domestic success, but also to their so far successful Champions League campaign which has seen them progress to the knock-out stages of Europe’s premier club competition for the first time since 2017. His stock couldn’t be higher and it was only a matter of time before Europe’s biggest clubs came calling. It has become clear that Chelsea are the club making the most serious noises.

Initial reports were unclear. Were Chelsea prepared to pay the €120m release clause stipulated in Fernández’s contract? Were they in fact offering a higher fee (€127m) but spread over a long period of time? Was Enzo set to depart Benfica imminently for huge sums of money? After a week or so of speculation, the firmest reports came out suggesting that Chelsea had in fact only been offered €85m, far below his release clause, and a sum of money that Benfica president Rui Costa was not prepared to accept. Perhaps in contrast to his predecessor Luís Felipe Vieira, Costa saw the value in keeping Fernández until the end of this season to complete the sporting project that Benfica have planned for this season, even if it means turning down mouth-watering sums of money in the January transfer window.

Roger Schmidt reacted angrily to this offer in a press conference with the Portuguese press where he said “There’s a club who want our player. They know we don’t want to sell the player. They tried to get the player on their side and they know they only can get this player when they pay the clause, so it’s a very clear situation. What the club is doing who wants to buy Enzo is disrespectful against all of us, against Benfica and I cannot accept what they are doing. So to make the player crazy and then to pretend they can pay the clause and later they want to negotiate. I think it is not what I understand about a good relationship between clubs who maybe want to discuss about the player.”

Really like this response from Roger Schmidt. Clear and honest, calls out the poor attempt from Chelsea to unsettle Enzo Fernández.

It’s clear that if #Chelsea want the player, they have to pay the release clause. Benfica don’t want or need to sell.pic.twitter.com/EVnfZD4sth

For Fernández himself this whole saga has shown us a previously unseen side to his personality as, perhaps on the poor advice of his agency team, the player has missed training sessions and travelled back to his native Argentina for New Year’s celebrations against the club’s wishes. With the transfer itself now seemingly in doubt, these actions could well come back to bite Fernández if he ends up staying at Benfica after riling up not just his employers and coaches, but also the fans who once sung his name with such passion. With much still to be resolved, this is sure to be the transfer that dominates the January window in Portugal, and has already shown that its progress can change at any time.

We may be less than a week into the January transfer window, but already some deals have been done, and more rumours continue to swirl in a notoriously tricky time for transfers. At the top end of the table (Enzo Fernández aside) transfer news has been pretty quiet. Benfica have already cleared out a few fringe players with Diogo Gonçalves (FC København) and Rodrigo Pinho (Coritiba) leaving the club on a permanent basis, and the likes of Paulo Bernardo set to leave on loan. There’s also speculation about whether Julien Draxler’s loan will be cut short after failing to impress manager Roger Schmidt. Any hint of them splashing the cash to bolster their title charge has been limited, but they could be on the verge of signing 18-year-old Norwegian winger Andreas Schjelderup from Danish club Nordsjaelland, for a hefty €14m. 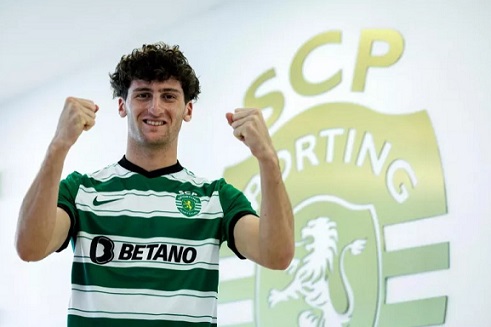 Sporting also recalled Tiago Esteves from his loan at Estoril, with the outgoing rumours for the Lions at the moment being a potential double offer that Tottenham might make for Spanish wing-back Pedro Porro, and former player and Englishman Marcus Edwards who impressed against them in the Champions League. Spurs retain a 50% sell on clause for Marcus Edwards meaning they’d effectively be entitled to a 50% discount on any transfer. These remain rumours at the moment, but it’s worth keeping an eye on whether any concrete offers materialise.

It wouldn’t be the January window without an in-form striker from a mid-table club being linked with a move away (often to the Middle East), and we could see a few of those transfers in this window alone, one of whom being Yakubu Aziz from Rio Ave. The Ghanaian striker has impressed this season scoring 8 goals in 15 games, and looks set for a €2.5m move to Egyptian giants Al-Ahly, although an issue with the striker’s medical which took place in Egypt this week could mean that the deal is restructured, seeing the striker join initially on loan. It is yet to be confirmed whether Rio Ave would accept this new proposition.

Following suit, Joel Tagueu is close to sealing a move to Saudi Arabian second division side Al-Hazm after four and a half years in Madeira with Marítimo. His replacement has already been signed with Marítimo bringing in Brayan Riascos, a name familiar to those who’ve followed Portuguese football in recent years.

Gil Vicente’s talismanic Spanish striker Fran Navarro who has scored 24 goals in 46 appearances since joining Gil Vicente from Valencia could be set for a return to his native Spain. He has often been linked with bigger clubs in the Portuguese League but it has recently emerged that Carlos Carvalhal could look to bring him to Celta Vigo who currently sit 17th in La Liga with only 15 goals scored, and would be keen to bring in support for veteran striker Iago Aspas.

Aside from strikers, Portimonense could be in line to make a small fortune from centre back Filipe Relvas. The 23-year-old Portuguese has already allegedly been the subject of €10m euro bids from two separate clubs, but Portimonense are holding out for a massive €20m. To put it into context, that is the same amount that Porto paid Braga for David Carmo in the summer. Portimonense have already brought in another centre back, as 23-year-old Brazilian Wagner joined on a free transfer from Santos.

And finally, what’s a transfer window without a bit of fake news? Two of our favourite random stories from recent weeks have to be former Swansea and Manchester City striker Wilfred Bony being linked with Lisbon side Estrela da Amadora, and perhaps most insanely of all, Kazuyoshi Miura, the 55-year-old striker who holds the world record for being the oldest active professional footballer, who is allegedly mulling over a move to Portuguese second division side Oliveirense.

Of course, it wouldn’t be the Portuguese League without some movement in the manager market, and there’s been some big moves since the league finished for the start of the World Cup.

Flat cap fans will be devastated to learn that Álvaro Pacheco was relieved of his duties at Vizela. This was a departure that shocked many seeing as Pacheco was the manager who oversaw Vizela’s rise from the 3rd division to the 1st division for only the second time in the club’s history, maintained that position at the first time of asking, and saw them in a healthy 13th place in the table at the time of his sacking.

In all seriousness, this was a profoundly disappointing decision considering everything he’s achieved with the club, and how much of the club’s on-field identity is down to him, especially with the club in a very healthy position with little investment. There was anger from the fans who protested at the clubs training ground following the decision to sack Pacheco, as well as an emotional farewell from Pacheco himself on social media. Pacheco was replaced with Manuel Tulipa, who had taken charge of Vizela’s U-23 side back in October, and has spent his recent career managing the youth teams at Marítimo and Porto, and who last managed a senior top flight side in 2009 with Trofense.

Both of the league’s bottom two clubs changed managers for the second time this season, Marítimo parted ways with serial job seeker João Henriques after three months in charge. In that time he managed 1 victory, 3 draws, and 7 losses in all competitions. Marítimo originally approached Daniel Ramos and Ricardo Soares about taking the job (the latter coming very close to signing on the dotted line). Both have experienced the kind of success in the Primeira Liga that Marítimo crave with Santa Clara and Gil Vicente respectively, but in the end Marítimo have settled on José Gomes to take charge, a man who has managed a host of Portuguese clubs, as well as teams in the Middle East and Europe. He has already given Marítimo something they had only managed to achieve once previously this season, a win.

The club currently holding up the Primeira Liga with a quite dreadful two points from 15 games is of course Paços de Ferreira, one of the worst sides we’ve seen in the top flight in many years. After sacking Cesar Peixoto with the club only on 2 points from 9 games they appointed José Mota to turn things around. 4 games later and with the club still on *checks notes* 2 points, Paços decided Mota was not in fact the man for the job. Who better to replace him? Of course, none other than Cesar Peixoto, the man they had sacked two months previously.

Apparently the players asked for him to return, and the board obliged. In the spirit of really ‘getting the band back together’ they also re-hired two former players in defender Maracas and goalkeeper Marafona. Sadly the club seems to be in a very bad place both on and off the field, but for better or worse, they’re a team to keep an eye on.

There could be plenty more managers on the move in the coming weeks, with clubs in precarious positions, the most likely to be leaving is Mario Silva whose Santa Clara side are 15th in the table and are really struggling for form after some strong investment from the board over the summer.