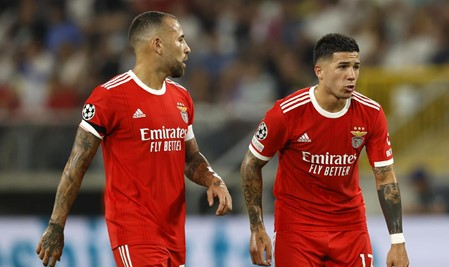 Continuing our series of articles on footballers playing in Portugal’s Primeira Liga who could become household names at Qatar 2022, PortuGOAL turns the spotlight on Enzo Fernández and Nicolás Otamendi.

The Argentinian midfielder touched down in Lisbon just a few months ago, but has wasted no time in showcasing his seriously impressive skillset. Tomorrow he could line up for his country alongside Benfica teammate Otamendi as one of the World Cup favourites play their Group C opener against Saudi Arabia.

Enzo Fernández has only just arrived in Portugal but already there are dozens of stories about elite clubs like Liverpool, Real Madrid and Manchester United all interested in signing him. Since moving to Benfica in the summer of 2022 he has rapidly risen to prominence, playing a crucial role in the Lisbon club’s sensational 25-match unbeaten start to the season.

At the age of just 21, he has only played 99 minutes in three appearances for the Argentinian national team. But with the injury to Geovanni Lo Celso, Fernández looks set to be a key player in Argentina’s midfield and from what we’ve seen of him at Benfica this season, he has the potential to be one of the best midfielders at the tournament.

Despite interest from Wolves as well as other clubs in Europe, Benfica secured the signing of Fernández from River Plate by activating his £12 million release clause, and Fernández made his debut for the Portuguese giants on 2 August, scoring a spectacular volley in the 4-1 victory over Midtjylland in a Champions League qualifier.

He had been part of the River Plate setup since he was a 4-year-old in 2005 and made his senior debut for the club in March 2020 having also played two times for Argentina’s U20 team. That August he was sent on loan to Defensa y Justicia coached by Hernan Crespo.

The season proved to be a defining one for Fernández and Defensa y Justicia. Crashing out of the Copa Libertadores at the turn of 2021, they entered the Copa Sudamericana. In this competition, Enzo announced himself with a late goal coming on as a substitute in the quarter-finals, and a starter in the semi-final and final, helping Defensa y Justicia win the competition for the first time in their history. Enzo remained with high-flying Defensa y Justicia and for the next season, once again playing a key part in their success.

River Plate manager Marcelo Gallardo had seen enough and brought him back to the Buenos Aires-based club for their title winning season in 2022 where Fernández would play 20 times, scoring twice and assisting three times. At just 20 years of age the hype was really just beginning, but Benfica, under new manager Roger Schmidt, saw a gem and pounced. He slotted straight into Benfica’s line-up, playing almost every minute of every game in the league, cup and Champions League this season.

Operating as one of the two in a double pivot, Fernández is the chief orchestrator of Benfica’s attacking play. His passing is almost comically good for statisticians with him regularly recording 100% pass accuracy in a half despite playing a range of long and short passes. The tempo he plays at as well has completely revolutionised Benfica’s midfield.

There have already been comparisons to Zidane due to his eye for a pass so few can see, quick change in direction and close control that gets him out of trouble when pressed, in addition to his two footedness.

Whether he would have started this World Cup if Lo Celso had not got injured we will never know, but it seems it was written in the stars that Enzo Fernández was destined to do something significant at this World Cup.

It has been a meteoric rise for the young midfield magician, who has had a phenomenal impact at Benfica. Should he a reach similar standard of performance in Qatar, it could accelerate a swift departure from Portugal and a huge profit for the Lisbon club.

Nicolás Otamendi: hero status at both Porto and Benfica

Should Enzo get the nod in Argentina’s starting XI tomorrow, he will likely line up alongside club colleague Nicolás Otamendi. Sometimes the butt of jokes towards the end of his time at Manchester City, the fact remains the no-nonsense centre-back clocked up 210 appearances for the Citizens slap bank in the middle of the most successful period in the club’s history.

Otamendi has always impressed in Portugal. He came to prominence at FC Porto, winning three successive championships from 2010-2013 in addition to the Europa League and a Portuguese Cup, before moving to Valencia, and then City.

His cult hero status at the Estádio do Dragão made it a huge shock when he signed for Benfica as part of the deal that saw Rúben Dias join Manchester City, and a sketchy start with some costly mistakes raised further questions among fans at the Estádio da Luz.

However, the 34-year-old has won over the Benfica supporters and then some with his fully committed and consistently high-quality performances, even donning the captain’s armband for the Eagles.

Over recent years Benfica have had a lengthy list of top Argentinian footballers who have given fabulous service to the club, such as Javier Saviola, Pablo Aimar, Enzo Pérez, Ezequiel Garay, Nico Gaitán, Toto Salvio and Ángel Di Maria, who is also in Qatar.

Enzo Fernández and Nicolás Otamendi are certainly two more names that Benfica fans also hold in the highest regard.