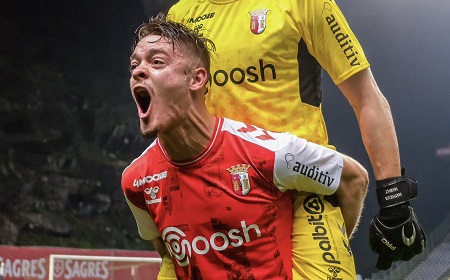 Sporting Braga produced an extraordinary comeback in the Minho derby, scoring three late goals to beat Vitória de Guimarães 3-2 in the Taça de Portugal Round of 16.

Jota Silva put the visitors into the lead in the 16th minute before Anderson Silva extended the advantage on the stroke of half-time.

Nélson Luz missed a great chance to put the game to bed in the 72nd minute, Braga making him and Guimarães pay the price by scoring three goals in the space of six minutes.

Abel Ruiz reduced the deficit in the 81st minute, Vitinha equalising with a screamer before Ruiz scored again to complete the comeback against their bitter rivals.

Guimarães dominate the first half

Guimarães got off to a great start and went close to taking the lead in the 4th minute. Jota Silva surged forward from the halfway line, getting past two Braga defenders but was unable to beat Matheus who made an important save.

Miguel Maga created the next chance for the visitors in the 11th minute, his cross met by André Silva whose volley was tipped over the bar by the Brazilian goalkeeper.

Guimarães’ attacking trio of Silva’s were linking up well up front with two of them combining to send them ahead in the 16th minute. Jota Silva gave the ball to André Silva and continued his run unopposed, receiving the ball back from the striker and firing a low drive into the bottom corner.

Braga were finding it difficult to advance to ball into attacking positions, their first chance coming in the 24th minute when Ricardo Horta’s shot was blocked.

Horta saw another shot deflected wide after some nice interplay with Abel Ruiz and Iuri Medeiros fired a free kick wide, but the game couldn’t get going due to Guimarães time wasting and players going down injured.

Tiago Silva’s injury was legitimate however, the midfielder unable to continue and replaced by Nicolas Janvier.

Celton Biai tipped Ruiz’s header over the bar with half-time approaching, but any momentum the hosts had was lost in the final minute of added time when Guimarães extended their lead.

Uroš Račić lost possession the opposition half, André Silva releasing Anderson Silva who got past Braga’s central defenders with ease, the Brazilian striker showing composure to chip the ball over Matheus.

Braga step on the gas

Artur Jorge had to act and made one change at the break with Vitinha introduced for Uroš Račić.

Braga went close in the 49th minute when Ruiz sent Ricardo Horta through on goal, his shot lacking sufficient power to beat Celton Biai who fumbled the ball before clearing it away from Iuri Medeiros.

Vitinha then headed Medeiros’ cross over the bar as Braga continued to search for a way back into the contest.

The Warriors’ attacking intentions were leaving them susceptible at the back as Guimarães went close to extending their lead in the 54th minute.

A swift counterattack resulted in Jota Silva presenting Miguel Maga with a great chance, the right back looking certain to test Matheus before Bruno Rodrigues made a crucial intervention.

The dullness that characterised much of the first half was now a distant memory.

Vitinha started to get heavily involved as he fired a shot wide, couldn't connect on a cross with the goal at his mercy and was unable to get enough power on an attempt that was cleaned up by Biai.

Two minutes later Luz fumbled a fantastic chance to kill the contest. Going on a long solo run from inside his own half, he ignored free players out wide and failed to shoot himself before losing possession in an attempt to take the ball around Matheus.

It proved to be a pivotal point in the match. 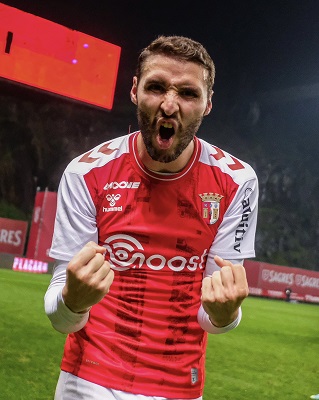 The Warriors kept pressing and finally made the breakthrough in the 81st minute. Victor Gomez’s pass took a deflection and fell straight to Abel Ruiz, his shot hitting Biai before finding the back of the net.

Two minutes later it was 2-2. Gomez picked out Banza in the box, the French striker flicking the ball to Vitinha who took a great touch before turning and firing an unstoppable left footed volley into the top corner.

Three minutes later it was 3-2. Vitinha started the move with a ball into Ruiz, he was unable control it before Ibrahima Bamba failed to clear the ball, Ricardo Horta’s shot deflected into the path of Ruiz who beat a stranded Biai.

Ricardo Horta hit the bar from distance in added time and Vitinha forced another save from Biai, but the comeback was complete in a fantastic game of football.

Vitória de Guimarães deservedly took the lead in the Minho derby and went into the break with a healthy 2-0 advantage. They shut Braga down for the majority of the contest and should have gone 3-0 up when Nélson Luz raced clear in the 72nd minute.

The visiting supporters were giving it large for most of the contest, but like their team, they faded away in the final 10 minutes as the reality of the situation kicked in.

Moreno makes another switch in Braga

Moreno started the season with a back four, before installing Ibrahima Bamba in the middle of a back three in the 1-0 defeat in Braga on 3 September when Vítor Tormena scored the winner in the 98th minute.

Despite that unfortunate defeat, it proved to be a turning point as the Conquerors stuck with the back three, going unbeaten in their next seven matches including five wins and a 0-0 draw against Benfica.

Just over four months later, the Guimarães manager made another significant alteration in Braga by starting Brazilian strikers André Silva and Anderson Silva for the first time. Despite suffering another heartbreaking defeat to their rivals, the change seemed to ignite an attack that hadn’t scored in their previous three matches.

Jota seemed to benefit from the switch which should be something we see more of in the coming weeks.

Artur Jorge made changes after his sided suffered a 5-0 thrashing against Sporting CP in the League Cup quarter-finals.

Vítor Tormena lost his spot in central defence after the defeat at Estádio José Alvalade, Al Musrati partnering Uroš Račić in midfield as Jorge switched to a 4-2-3-1 with André Horta in an advanced playmaker role.

It worked a treat in Braga’s next two games, a 3-0 win against Benfica and 4-0 victory at Santa Clara, but it came unstuck against Guimarães before being bailed out with three late goals.

Paulo Oliveira and Bruno Rodrigues were carved up time and time again in the first half and looked like fish out of water. I expect Tormena to resume his central defensive partnership with Sikou Niakaté sooner rather than later.

It also makes sense that Vitinha will come back into the starting side to partner Abel Ruiz up front, Jorge sure to contemplate reverting to the 4-4-2 that worked so well at the beginning of the season.

Santos
There are no comments posted here yet