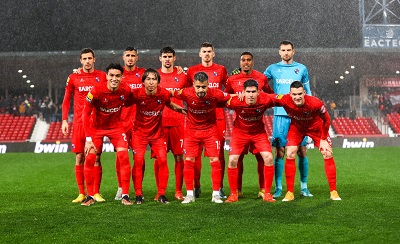 The visitors took the lead in the 18th minute when they punished Ali Alipour’s turnover, Anderson Silva racing through on goal and lifting the ball over Stanislav Kritsyuk.

Bruno Varela kept Guimarães in the game with two impressive saves, but he couldn’t prevent the equaliser in the 40th minute when another save popped up for Alipour who headed home.

The turning point came in the 65th minute when Anderson Silva received a second yellow card for diving, Gil Vicente piling on the pressure with Fran Navarro scoring the match winner in the 82nd minute.

End to end action in the rain

Neither goalkeeper was tested in the early exchanges despite both teams regularly getting forward on a wet and windy evening in Barcelos.

Guimarães were showing more attacking intent however, and were duly rewarded in the 18th minute when they took the lead after a terrible turnover.

Ali Alipour inexplicably tried to dribble the ball out of his own box and was robbed by Miguel Maga, the right-back releasing Anderson Silva who calmly lifted the ball over Stanislav Kritsyuk.

Gil Vicente got on the front foot and went desperately close to equalising twice in the space of three minutes.

Carraça’s was cross met by Fran Navarro, his shot from point blank range saved by Bruno Varela before the goalkeeper made another impressive save after Navarro sent Alipour through on goal.

The hosts kept pressing and equalised in the 40th minute. Alipour laid Murilo de Souza’s cross into the path of Navarro, Varela making another save with the ball popping up perfectly for Alipour who jumped over Maga and headed the ball into the net.

The match took a big turn in the 65th minute when Guimarães were reduced to 10 men. Anderson Silva, who had already been booked for lashing out at Vitor Carvalho at the start of the second half, was shown a second yellow card for diving.

Both managers continued to go to their bench in an attempt to turn the tide, Sousa introducing Juan Manuel Boselli for Souza and Moreno bringing on Mikey Johnston for an injured Jota Silva.

Navarro gets it done

It was Gil Vicente looking most likely to break the deadlock however, with the breakthrough coming in the 82nd minute. Giorgi Aburjania’s pinpoint through ball released Fran Navarro, the Spanish striker beating Varela to net his 12th goal of the season.

Navaro saw another shot blocked before scoring from an offside position, but it was job done for the hosts who made it consecutive home wins in the Primeira Liga where they move out of the relegation play-off position at the expense of Santa Clara.

Daniel Sousa replaced Ivo ‘I don’t believe in my players’ Vieira at an optimal time, right before the League Cup group stage where they went undefeated in three games before a 2-0 loss at Porto in the quarter-finals.

We are starting to see Sousa make his mark on his team with Tomás Araújo and Giorgi Aburjania receiving a lot more playing time.

Vieira never started a match with Ali Alipour and Fran Navarro up front, something Sousa has done three times in Gil Vicente’s last five games. Alipour needs time to get used to playing predominantly on the left wing, but there was enough evidence to suggest that his relationship with Navarro should persist and can continue to improve.

The match kicked off at 9:15pm on a cold, wet and windy evening in Barcelos, with many supporters of both clubs understandably staying away with work and school the priorities on Tuesday morning.

Football and sport in general has no business being played at 9:15pm on a Monday night, something the out-of-touch decision makers at Liga Portugal should realise sooner rather than later.

Pablo
This comment was minimized by the moderator on the site

Huge win here for Gil Vicente. Fran Navarro is a solid player and I am surprised he has not yet been picked up by a bigger club. While losing a player of that calibre will hurt small clubs, there is no denying that the profit from selling is too...

Huge win here for Gil Vicente. Fran Navarro is a solid player and I am surprised he has not yet been picked up by a bigger club. While losing a player of that calibre will hurt small clubs, there is no denying that the profit from selling is too hard to pass on, especially for a free transfer like Fran Navarro who will easily net them 6 million +

I actually do not mind the Monday games, but I think the problem is the kick off time. 9:15 is ridiculous. I think if the games were at 6:30 or 7 PM, it would be a lot better & definitely more accommodating to everyone’s schedule.

Edgar Io
There are no comments posted here yet