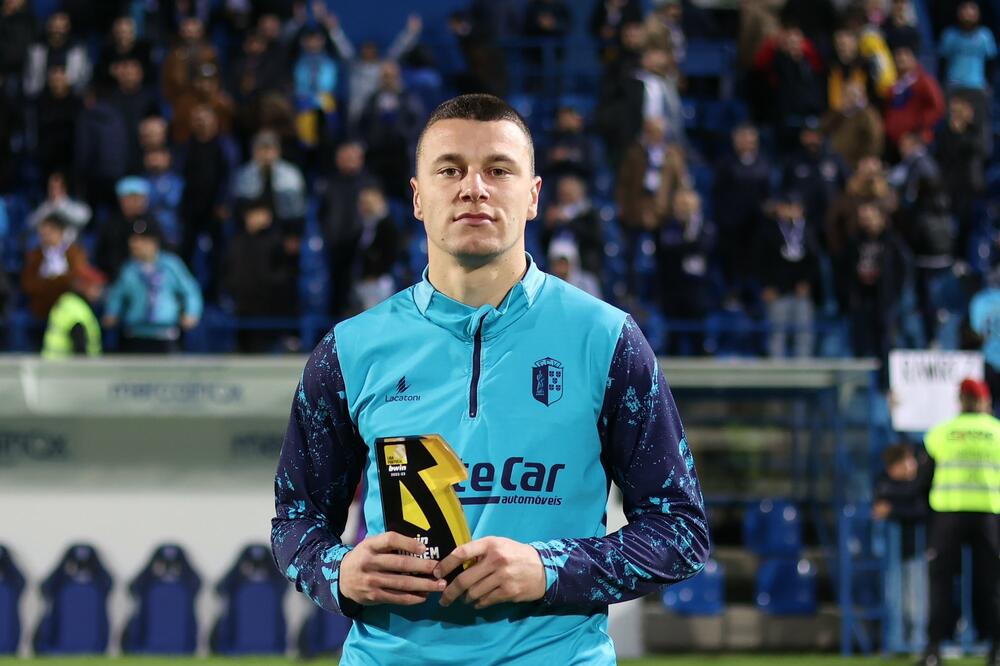 A typically fiercely-contested Lisbon derby between Benfica and Sporting was one of the highlights of Liga Bwin’s 16th round of action, the pair playing out a 2-2 draw to allow the elsewhere victorious Braga and Porto to close the gap at the top of the table.

One team arguably confounding expectations is Vizela, not getting involved in the relegation battle and in fact moving into the top half this week courtesy of triumph over Marítimo. Their number nine Milutin Osmajić has hit form of late, and his two-goal display at the weekend makes him our PortuGOAL Figure of the Week.

Montenegro international striker Milutin Osmajić was not a familiar name in Portugal when Vizela signed the 23 year old on loan last summer to bolster their attack. He featured infrequently for his parent team, La Liga’s Cádiz, loaned out in the second half of last season to the Turkish second tier with Bandırmaspor, to little effect.

Osmajić represented an unknown quantity to Vizela in an area that very much needed strengthening: despite their impressive Liga Bwin survival in 2021/22 they lost two influential forwards in the close season in the form of Brazilian duo Guilherme Schettine and Cassiano.

This campaign has proven tricky for Vizela to pin down a regular player to spearhead their attack, with Osmajić vying with Austrian Alexander Schmidt, and young Nigerian Friday Etim, none of whom able to convince on a consistent basis, particularly in front of goal.

That is until very recently however as Osmajić looks to have turned the corner and separated himself from the pack after hitting a positive vein of form, capping a hard-working display with a goal in the win over Vitória Guimarães two weeks ago. This has led to something the Montenegrin has craved, a run of games in the side. Indeed, his naming in the starting XI of Saturday afternoon’s home contest with Marítimo was only the second time this season that Osmajić had made a third consecutive Vizela lineup.

Despite their struggles at the wrong end of the table this season, Marítimo represented dangerous opposition for Vizela having produced one of the upsets of the league campaign last week in beating Sporting. Vizela themselves were looking to respond to defeat to Famalicão, and what a response it was as the home side flew out of the blocks in a scintillating start to the match for both the team and Osmajić individually.

In just the third minute, Vizela raced into the lead, catching Marítimo cold. Midfielders Kiko Bondoso and Samú combined, with the latter crossing into the box to find Osmajić lurking in a predatory fashion at the back post to tap into an empty net.

Osmajić had played his part in the buildup to the goal too, bringing down a deep pass before laying it off for Samú, before darting into the danger area to finish off the move.

Barely two minutes later a shell-shocked Marítimo’s troubles worsened as Osmajić and Vizela struck again. Raphael Guzzo’s interception led to Samú and Osmajić exchanging passes before the latter fired a slightly scruffy finish past Marcelo Carné in the away side goal.

An extraordinary start almost got more so as Osmajić came close to wrapping up a hat-trick inside ten minutes, only to be foiled by a good save from Carné at his near post.

The second half saw Marítimo continue to struggle with Osmajić’s movement and renewed confidence, and he was denied a hat-trick once more in the 49th minute, only illegally this time as opposition defender Matheus Costa hauled down the No9 with him through on goal, earning a red card in the process and effectively killing the game as a contest.

Vizela took advantage of the extra man, seeing out the game in comfort. The hat-trick continued to elude Osmajić though, almost grabbing it in the 67th minute with a low shot that shaved the post before his manager withdrew him minutes later for a well-earned rest. The team later added a third goal through Anderson Jesus to crown an important victory, their second consecutive 3-0 success on home turf enough to send them up to 8th in the division.

Osmajić’s fine brace turn saw him double his league goals output for the season in the space of the afternoon, and his record of three from his last three represents a striker who is now looking settled in the climes of the Portuguese league, benefitting from the consistent run in the team he was failing to achieve earlier in the campaign. Vizela are just 12 points shy of their 2021/22 total, and not even halfway through this season. With Osmajić leading the line in this form, eclipsing that record should be a more than realistic target in the months ahead.