Who are the brightest upcoming prospects in the Primeira Liga? 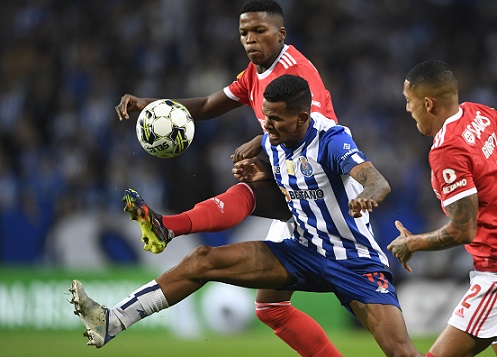 The Primeira Liga is recognised as one of the most exciting leagues in the world as well as one that produces hot soccer talent. In recent times, there has been a steady flow of young stars from this league making big moves abroad.

To cite a few recent examples, Nuno Mendes switched to Paris Saint-Germain after helping Sporting to their first league title in two decades, former Porto midfielder Vitinha is also settling in nicely in the French capital, while Fábio Carvalho, previously at Benfica’s academy, is becoming a key player for Liverpool. Portuguese brilliance is making waves around the world.

There are plenty of players lighting up the Primeira Liga right now who could be next in line for a mega-million euro transfer abroad.

This youngster is not particularly well known outside of Portugal just now, but that is likely to change. Within the country he is regarded as one of the finest centre-backs in the division.

Inácio is still only aged 21 and has been with Sporting since 2012, having joined them from his local team Almada. He began his first team career at Sporting three years ago and quickly became a regular as the club won the league cup twice and the 2020/21 Primeira Liga title.

The left footed defender combines skill with solidity. His height makes him excellent at defending crosses as well as a goal-scoring threat. He has netted nine times in just under 100 appearances for Sporting. He’s being tipped for a move to Manchester United in the current sports betting odds.

This 22-year old is sometimes referred to as ‘Vitinha’ but should not be confused with the above-mentioned ex-Porto midfielder who made the move to Paris Saint-German this summer. Oliveira is a striker for Primeira Liga side Braga and he is hotly tipped to be one of the next Portuguese stars to move abroad.

He is a product of the Braga academy and the 2021/22 season really brought him to national attention. He scored his first goal in the league in October and went on to notch up seven goals by the end of the season.

He is on course to better that total this year and is developing into a striker with pace and has a tenacious work ethic, ideally suited to the high-press style that many top teams now use. There are raw aspects of his game, notably in the air and passing, but he is improving rapidly.

Commonly referred to by his first name only, Florentino has already experienced two periods away from the Primeira Liga, at Monaco and Getafe. Having been with Benfica since 2016, the defensive midfielder was promoted to the first team three years later.

He was highly regarded by then-manager Bruno Lage, but his successor Jorge Jesus did not hold him in the same esteem. That led to the loan moves, but neither particularly suggested that he was about to rediscover his confidence and form.

A return to Benfica this season has seen him really start to impress again though. Florentino is now being compared with such illustrious players as N’Golo Kante and being linked with Manchester City, Chelsea and Liverpool in the EPL.

He has the mobility needed of a top-class defensive midfielder, covering lots of ground in each game to break up opposition moves. That has led the media in Portugal to nickname him ‘the Octopus.’

It has also led Benfica to slap a price tag of 120 million Euros on him.

Galeno is a winger for FC Porto and has a wealth of experience in the Portuguese league despite being just 25. He has played more than 100 games at Porto and Braga and has earned comparisons with Hulk.

During his 2018/19 loan spell at Rio Ave he shone, showcasing perfect control of the ball coupled with lightning pace. Linking up effectively with striker Gelson Dala, he managed nine goals and 10 assists.

Galeno kept up that form with Braga over the next three years, which secured him a summer return to Porto. He is impressing, with five goals and an assist from 15 games.

Nantes and Lille are among the French sides rumoured to be interested.

Horta is older than the others at 27, but that is still time for a big move. At Braga he has established himself as a consistent goal scorer, so much so that he recently established a record as the club’s highest ever scorer, having found the net over 100 times at a ratio of almost exactly 1 goal every 3 games. Some going considering he is not an out-and-out striker.

What makes it more impressive is the Braga are not one of Portugal’s traditional Big Three, so chances are often at a premium. He creates them for himself though, with 60 open-play chances created throughout 2021/22.

Horta is a forward who can also start attacking moves as well as finish them off. He was involved in creating 24 goals last season in addition to those he scored himself.

Any of the above five players have a good shot at becoming one of Portugal’s next international soccer stars.

With all due respect, I wouldn’t call Ricardo Horta an upcoming prospect. The man is 27 and played at the World Cup.

With all due respect, I wouldn’t call Ricardo Horta an upcoming prospect. The man is 27 and played at the World Cup.

I think more interesting content for an article like this would be to highlight players like Filipe Revlas, Leonardo Lelo, Kiko Bondoso, or Tiago Santos. Some of the lesser known players performing well for smaller teams

João
This comment was minimized by the moderator on the site

João
There are no comments posted here yet