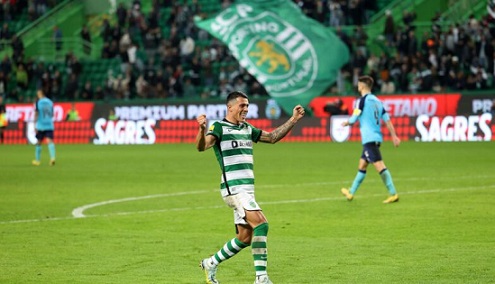 A stoppage-time penalty converted by Pedro Porro got Sporting back to winning ways in Lisbon tonight as the Lions overcame an impressive Vizela 2-1.

Sporting went ahead through a Pedro Gonçalves goal on the hour mark and created enough chances to have built a comfortable lead, but Vizela were rewarded for their enterprising play with an equaliser by substitute Alex Méndez in the 75th minute.

It seemed the points would be shared but Vizela eventually cracked in the face of Sporting’s late pressure.

Rúben Amorim selected the same starting XI that drew 2-2 at Benfica last week while Vizela were aiming to build on some promising form under new coach Manuel Tulipa, including two 3-0 victories in their last three matches against Vitória and Marítimo.

Both sides had one-on-one opportunities early on. Paulinho showed good pace to latch onto a long Coates pass, but Buntic denied the Sporting striker. Nuno Moreira then threaded a fine ball for the in-form Milutin Osmajićto to run onto, but the Montenegrin forward could only hit a tame effort straight at Adán.

The big chances kept coming, this time Trincão clean through but again the finish was disappointing and Buntic made the save. Trincão had another golden chance to score on 20 minutes with Coates again unlocking the Vizela defence with a long ball over the top, but once again Buntic won the duel.

Nuno Santos thundered a shot narrowly over and then Paulinho completely miss-kicked with the goal at his mercy after a good combination between Porro and Trincão had set him up.

Although conceding plenty of chances and riding their luck, Vizela were also playing some neat passing football when they got the chance, with captain Samú Silva at the heart of most of their good work.

At half time Amorim took off Marcus Edwards and pushed Pedro Gonçalves further forward as Hidemasa Morita made his comeback after injury and took his place in midfield alongside the ever impressive Manuel Ugarte.

Pote shot narrowly over the bar shortly after the break, but with Sporting failing to penetrate the Vizela defence and the crowd getting restless, Amorim made another change with Arthur Gomes replacing the off-colour Trincão.

With the hour mark approaching Sporting finally made the breakthrough. Matheus Reis squeezed a dangerous ball across the face of goal, Porro latched onto it, glanced into the six-yard box and picked out Pedro Gonçalves who turned the ball into the net from close range.

The hosts almost doubled their lead soon afterwards as Paulinho worked himself into the box, shot past Buntic but saw his effort thud back into play off the post.

Vizela coach Tulipa freshened things up by bringing on Alex Méndez and Matheus Pereira for Nuno Moreira and Kiki Afonso for the final 20 minutes.

Immediately Paulinho found the net at long last, but it did not count as the ball had gone out of play in the build-up.

Vizela began to commit more players forward, and as has happened so often this season, Sporting’s defence wilted under the pressure.

It was the two substitutes who combined as a superb cross by Matheus Pereira was powerfully headed into the net by Méndez, Adán getting a strong touch on the ball but unable to keep it out.

Sporting were furious with the referee Rui Costa as the ball had hit the official during the build-up, but the goal stood. Curiously, it is the second weekend running that Sporting have felt aggrieved at the referee’s unwitting intervention, with a similar incident in last week’s Lisbon derby.

A flurry of substitutions saw four of the game’s main protagonists depart the scene as Pote, Ugarte, Samú and Bondoso made way for Tanlongo, Chermiti, Zonhi and Rashid respectively.

Sporting were now playing with their heart rather than their head and as the chances dried up it appeared another two points would be dropped.

However, when Paulinho’s head was caught by a high boot from Igor Julião and the striker stayed down, the referee decided to check the pitch-side monitor and duly pointed to the penalty spot. Pedro Porro held his nerve to fire in the winner.

As the season reaches the halfway stage, Sporting will be extremely relieved at having won a hard-fought three points, but know they must improve significantly at both ends of the pitch if they want to claw themselves back into contention for Champions League qualification in the second half of the season.

Many were surprised when Vizela recently let go of their coach Álvaro Pacheco after a highly successful spell, but the change in the dugout does not seem to have affected the team who again showed they have more than enough quality to avoid any relegation drama.

By Tom Kundert, at the Estádio José Alvalade

Good for Sporting to get the win, gotta keep their good form going that they've showed in this new year.

But again have to be better defensively, again just like in the game vs Benfica Matheus Reis falls asleep loses his man then it was Ramos...

Good for Sporting to get the win, gotta keep their good form going that they've showed in this new year.

But again have to be better defensively, again just like in the game vs Benfica Matheus Reis falls asleep loses his man then it was Ramos who scored a easy tap in, this game it was Mendez drifting in for a header. Like I was saying last time Ruben Amorim needs to do better at our game defensively. Reis has shown time and again he lacks defensive concentration and awareness as a center back. Maybe the plan was to play St. Juste, Coates, Inacio which would possibly be great but St. Juste is always injured.

Which leads to another point that in my opinion a number of Ruben Amorim's singings have been uncessecary poor judgement calls, which could have been used more wisely on one area that was really needed. Sporting really need a better striker. Paulinho is always hot and cold has yet to kick on since he signed. There is no replacement for him. Instead Ruben wastes money on Artur Cabral (yes a good player but not what we needed), Rocinha (no idea why we need him not even good), wasted money on Sotiris Alexandropoulos yet never plays him smh but he is a player I actually think has quality and could help us in midfield an area we've struggled with since Nunes and Palhinha's departure. We've had to drag Pote into the midfield yes he is a midfielder as well and good there, but why waste money on Sotiris who could potentially be a good partner for Ugarte and never play him. And St. Juste who I do like him but he was coming off a serious injury problem before we even signed him, which is always a risk, since he came he's had small knock after small knock can never be in the team consistently.

All this money could have been more wisely spent with precision targetedly on what we need which is another striker. Paulinho showed this with his wastefulness again this game smh. He scores wonder goals and misses easy goals smh weird player. I want a striker who scores week in week out. Pote has once again had to be carrying us in goal scoring which is amazing but we would be so much better with another lethal player up top in the striker spot.

So I do like Ruben Amorim and respect what he's done, but lately last year and a half I feel like he has been unfocused, or confused about what he's trying to build, and using a overall blanket spreading yourself too thin approach rather than keeping our squad size appropriate a little leaner more focused spending specifically on exact needs which would really make us stronger.

I expect improvements! Come on Sporting!