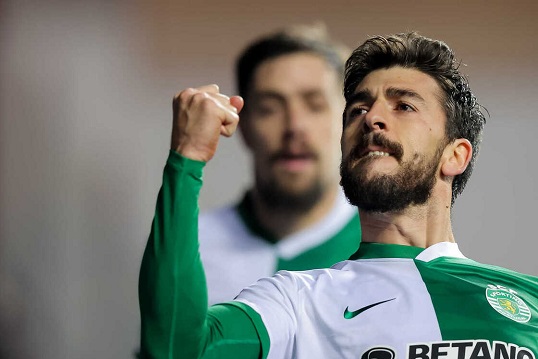 Sporting are into the Taça da Liga final for the fifth time in six years after beating Arouca 2-1 in an action-packed semi-final in Leiria.

The Lions dominated the first half only to apparently fall behind on the stroke of half time, but Antony’s goal was ruled out after a long VAR check. To rub salt into the wounds for Arouca, there was still time before the break for Paulinho to give Sporting the lead.

The second half was a different story with a far more adventurous Arouca deservedly equalising through in-form Palestinian striker Oday Dabbagh, but a late Paulinho strike put Sporting into Saturday’s final, where they will play either Porto or Académico de Viseu.

Amorim pulled off a couple of surprises with his starting XI, leaving Pedro Porro and Gonçalo Inácio on the bench with Ricardo Esgaio and St. Juste getting rare starts. For high-flying Arouca, Jerome Opoku and David Simão came back into the line-up after missing Saturday’s 4-0 demolition job against Portimonense through suspension.

Sporting in a rush

Arouca had beaten Sporting in the league earlier this season and came into the match with morale high, but it was the Lisbon side who took control of proceedings from the off.

Paulinho twice and Pote had come close to scoring in the opening minutes when a brilliant run by Edwards in the 10th minute seemed certain to lead to a goal. After jinking past four players the Englishman laid the ball off for Nuno Santos, who dinked the ball over Arouca goalkeeper Thiago but a retreating defender prevented it from entering the net, and Paulinho could not direct the rebound home.

Arouca suffered a setback soon afterwards as Weverson was stretchered off, replaced by Quaresma. Truth be told, Quaresma has been one of the standouts in Arouca’s sensational season, and the usual left-back would have another good game tonight.

Sporting continued to carry all the forward momentum, Arouca barely getting out of their defensive half. The effervescent Santos forced Thiago into a scrambling save.

On 30 minutes the referee would have to make the first of several difficult calls. Incessant Sporting pressure ended with Morita firing at goal from a central position inside the box. The ball struck Oriol’s arm but the referee waved away furious protests from the Green and Whites that a penalty should have been awarded.

Thiago was being overworked, the Brazilian goalkeeper athletically saving from Paulinho twice and Nuno Santos twice.

A goal for Sporting looked inevitable, but with the half-time whistle approaching and from practically Arouca’s first dangerous attack, the ball ended up in Adán’s net. A well-worked counter saw the ball worked to Antony, who produced either a majestic trivela lob over the Spanish goalkeeper, or a misguided cross. Whatever, the ball looped into the net and the Arouca players and fans were celebrating wildly.

However, Sporting’s players were furious that what they considered a João Basso handball had not been called at the start of the attack, and after receiving instructions from VAR and a long check with the pitch-side monitor, the referee agreed with them, chalked off the goal and awarded a free kick in Sporting’s favour.

From the resulting free kick, the ball was worked to Nuno Santos, his pinpoint cross to Pote headed across goal for Paulinho to volley powerfully into the net with his left foot. Soon afterwards the referee brought an end to a breathless first half.

In the 52nd minute Sporting thought they had doubled their lead when Matheus Reis fired in from close range, but he had strayed offside.

Arouca were now committing more men forward and defending higher up the pitch as Sporting’s defensive instability this season began to rear its ugly head. Reis was lucky to escape a careless giveaway near goal, with Dabbagh nipping in front of Adán to steal the ball but unable to control it in time to knock the ball into an empty net.

Sylla was next to threaten, his well-struck effort just clearing the bar.

Arouca were building a head of steam and were duly rewarded in the 58th minute. Alan Ruiz showed class in crossing the ball with the outside of his right foot for the alert Dabbagh to poke past Adán. 1-1.

With no extra time in the Taça da Liga, both teams were going for the win, making for a thrilling spectacle. Arouca goalkeeper Thiago saved bravely at the feet of Esgaio, while at the other end of the pitch Opoku forced Adán into a sharp save.

Amorim brought on Pedro Porro (for Esgaio) and Arthur Gomes (for Morita) to try and give Sporting more thrust, while his opposite number Armando Evangelista swapped Dabbagh for Michel.

Sporting would retake the lead soon afterwards. Again, man-of-the-match Nuno Santos was the architect of the goal, his inventive cross picking out Paulinho’s run, with the striker prodding past Thiago from close range.

The much-maligned striker has scored a remarkable 8 goals in 5 matches in this season’s Taça da Liga. It contrasts markedly with his goal rate in other competitions, having scored just 3 goals in 18 games in the Primeira Liga, Champions League and Portuguese Cup.

Arouca were not done yet, David Simão hitting an effort just past the post.

Sporting held on however, with Paulinho twice going close to completing his hat-trick. But on a triumphant night for the Portuguese striker, it was a worrying sign for him and his club to see him leave the pitch with his arm in a sling having badly hurt his shoulder.

A terrific night’s entertainment in Leiria, and tomorrow it is Porto and Académico’s turn to go at it at the same venue to try and book their place in Saturday night’s final.

Tiago
This comment was minimized by the moderator on the site

I really do hope that Porro at least stays until the final, nowing our management it probably won't happen.

On the other hand, what are they supposed to do if Tottenham pays the release clause

Tiago
There are no comments posted here yet