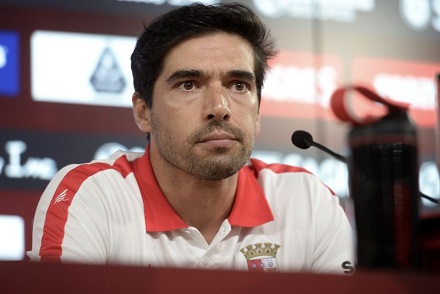 It was business as usual for Porto and Benfica in Week 11 of Liga NOS but Sporting dropped two points in one of the games of the weekend, a thrilling 2-2 draw with a very impressive Braga at Estádio José Alvalade.

After a difficult campaign in 2016/17, the Arsenalistas have been resurgent this time around, and much of the credit goes to manager Abel Ferreira, who is PortuGOAL’s Figure of the Week.

Ferreira coached Braga’s B team from February 2015 until April 2017 (earlier in his management career he had coached Sporting’s B team), when he was promoted to the first-team position permanently, replacing Jorge Simão who had an underwhelming spell at the helm. Ferreira had briefly taken caretaker charge earlier in the season after the dismissal of José Peseiro, making it three coaches in all during a tumultuous campaign that saw Braga ultimately slip to 5th place below their fierce Minho rivals Vitória Guimarães.

A productive summer in the transfer market under Ferreira had Braga in good shape for the beginning of this campaign, and after a slightly choppy start the manager has brought a real stability to the side, striking a pragmatic balance of substance and style.

One key factor Ferreira has brought to the team this season is a higher level of discipline and willingness to press, on display at Alvalade as Sporting never really settled into a comfortable rhythm. Even after Bas Dost had given the home side the lead with a neat volleyed finish, Braga’s shape remained tight and the mentality of the player’s shone through as they continued to impress the manager’s gameplan.

Braga got themselves a deserved equaliser when Sebastián Coates brought down the outstanding Danilo in the box in the 85th minute. Sousa stroked home from the spot to set up what would be the most frantic of finales.

Sporting were evidently beginning to tire in the latter stages after a high intensity Champions League encounter with Juventus in midweek. On the other hand, Braga were looking fresh, despite having travelled to Bulgaria on Thursday for their own European commitments in the Europa League. Once again it is Ferreira who can gain the plaudits for his team’s energy levels.

Ferreira has heavily rotated his Braga squad through what has been a busy schedule this season and it hasn’t always worked out well, but here was a clear example of him getting the balance just right. Braga smelled blood and as they continued to pour forward, they looked to have won the three points when Danilo proved decisive again, albeit with a slice of fortune as his strike from the edge of the area took a deflection to beat Rui Patrício in the Sporting goal with only one minute of normal time left to play, sparking wild celebrations among the whole Braga contingent.

Ferreira and Braga’s night was to be tarnished in stoppage time however, a clumsy challenge from Ricardo Horta on Alan Ruiz allowed Bruno Fernandes to snatch a point for the home side. Sporting’s unbeaten run remains intact, however Braga certainly made a statement here not just by almost claiming victory, but the manner in which they went about playing one of the best teams in the country.

Ferreira, 38, is quietly establishing himself as one of the young coaches in Europe to keep an eye out for, with a number of forward-thinking ideas beginning to bear fruit for Braga, who go into the international break in 4th place in Liga NOS, on a run of just one defeat in their last twelve matches in all competitions.

Eric
This comment was minimized by the moderator on the site

Hi Eric, no, he actually played for Sporting, and both Minho clubs (Braga & Vitória) before that. Yes, he looks like another promising young Portuguese coach.