Title race hots up: Benfica and Sporting hone in as FC Porto slip up 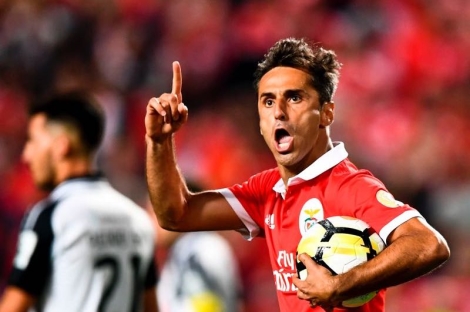 International commitments and cup football had kept the Primeira Liga on hold for a few weeks, and it was with a shock at the top of the standings that it announced its return.

Sitting pretty at the summit of the league table, FC Porto had their momentum checked by a lowly Desportivo das Aves side, with the Liga NOS newcomers battling from a goal down to secure a 1-1 draw versus the Dragons.

The slip-up would offer Sporting and Benfica touching distance from first place, capitalised upon by the Lions in their 2-1 victory away to Paços de Ferreira. Benfica wouldn’t miss out, defeating Vitória de Setúbal 6-0 and setting up a tasty-looking Clássico versus Porto next week. PortuGOAL brings you up to speed with the weekend’s top action.

With one third of 2017/18 season played, the Portuguese title race this year looks to be turning into a genuine three-horse race where it would be a brave man to gamble on the eventual winner. Alternatively, try your luck at online casinos by visiting Slots Million and les machines à sous gratuites.

The last time 16th-placed Aves took to the stage against one of the Big Three, their new boss Lito Vidigal attributed his side with just a “two percent” chance of grabbing a scalp. A month later, the league leaders, Porto, arrived in their neck of the woods but the ex-Arouca man’s forecasts proved to be a lot kinder after the work put in since last October.

Nevertheless, Vidigal’s calculations would have been pessimistic again when Ricardo Pereira put the Dragons a goal up as soon as the 6th minute, making full use the visitors’ first shot on target to slip a finish under the goalkeeper’s legs.

Aves responded well, striking the bar through Amilton in the 22nd minute, as Porto held on to their slender lead going into half-time.

Matters complicated themselves for Sérgio Conceição’s side in the 52nd minute when Jesús Corona picked up a second yellow card to leave his team down to ten men. Aves would take advantage of their numerical superiority and equalise through Vitor Gomes in the 63rd minute, with the midfielder glancing his header past José Sá from Amilton’s cross.

Vincent Aboubakar had the winner at his feet moments later when bringing a lobbed ball down with neat control, in front of goal, before fluffing his lines and smashing his effort way over the bar. Porto ended the game with a furious claim for a penalty, as Amilton’s clearance inside his own box took out both the ball and Danilo Pereira but the referee ignored the appeals.

A goal apiece at full-time, the Dragons now see their place at the top of the table come under threat ahead of next week’s huge clash at home to Benfica.

Porto’s draw and upcoming date against the Eagles next week may have seemed like the perfect storm for Sporting, but they still needed to produce the goods at the much-feared Mata Real before they could even dream of hijacking first place in the days to come.

Sporting grabbed their lead in the 20th minute when Bruno Fernandes’ corner found Rodrigo Battaglia at the far-post, the Argentine midfielder finding the net at the second time of asking, with his header floating into an uncovered goal.

Bruno Fernandes was then left ruing the existence of the woodwork when striking the post with a terrific first-time volley from outside of the box in the 65th minute, just moments before Awer Mabil ran into similar luck with a near-post header onto the bar for Paços de Ferreira.

Sporting then doubled their lead in the 75th minute following good work down the left flank from Bruno César and Fábio Coentrão, with the latter supplying Gelson Martins with the pass, the winger turning expertly inside the box before firing into the bottom corner.

Paços de Ferreira’s Marco Baixinho clawed a goal back at the beginning of added time to set up a grand finale, but the Lions rode out the game to move to within two points of first place.

If the stakes were high at both the Estádio do CD Aves and Mata Real, then expectations were no different at the Estádio da Luz where Benfica would be playing catch-up versus Vitória de Setúbal, and had the chance to get to within striking distance of Porto ahead of their trip up north to face the leaders next week.

The Eagles landed themselves the ideal start, as Jardel’s aerial knock-on from a set-piece enabled Luisão to tap in the game’s first goal early on.

Benfica continued to look dangerous in the air throughout the first period, calling Cristiano into action on occasions, but the Brazilian was left beaten for a second time when Jonas was picked out in the 39th minute to nod in his iconic 100th goal for the Lisbon outfit.

Setúbal’s night continued to erode away, with Nuno Pinto collecting a second yellow for a hopeful slide tackle on Luisão and reducing his team to 10-men prior to the half-time whistle.

The game continued to descend itself into a nightmare for the visitors as early as the third minute of the second period, as Pizzi squeezed a pass inwards for Salvio to run with before beating the keeper at his near-post with a cool, side-footed finish.

With an arrowed volley inside the area, Jonas claimed his 101st goal for Benfica before André Almeida also got in on the act and make it 5-0 by the 68th minute. Andrija Zivkovic added a sixth to the hosts’ account, courtesy of a blunder by Cristiano between the sticks, as Rui Vitória’s men totted up their biggest win of the season.

A not unexpected result for Porto due to the draining Champions League game. Now Benfica are out they'll be looking to push on in the League and if Porto lose the classic on Friday it could be problematic.

Regarding the Champions league -...

A not unexpected result for Porto due to the draining Champions League game. Now Benfica are out they'll be looking to push on in the League and if Porto lose the classic on Friday it could be problematic.

Regarding the Champions league - Strong performance by Porto considering the opposition/venue. Especially Herrera/Danilo/Brahimi. They were under pressure for the whole match but didn’t crumble. Impressive mental strength and even when up against it they kept pressing and working. Pressing high means you need perfect positioning and passing, doing it all at that frantic pace must have been tough.
Herrera was given an almost free role so when not in possession he went up top with Aboubakar to stop Besiktas playing out from the back but was also everywhere across midfield recovering the ball and linking up play as well. What a player. Besiktas had to put 3 players on Brahimi! Marcano looked uncharacteristically wobbly at times which was the only negative. Clever to put Maxi/Ricardo on the right then bring on Corona as once again the mister got it right. If they get through and get a good draw who knows how far they can go.

After a very promising performance against Vitoria Guimaraes, Rui Vitoria has decided to stick with the 4-3-3 and it appears to be working. Krovinovic adds a completely different dimension to our offense. He's so much more than an extra body in...

After a very promising performance against Vitoria Guimaraes, Rui Vitoria has decided to stick with the 4-3-3 and it appears to be working. Krovinovic adds a completely different dimension to our offense. He's so much more than an extra body in midfield; he can dribble out of pressure, his passing is extremely sharp, and he always seems to make the right decision with the ball at his feet. His ability to create and exploit spaces in between has allowed us to play a more intricate, possession-oriented game, which could definitely come in handy against quality opposition.

Vitoria will most likely stick with the 4-3-3 against Porto on Friday, but there are plenty of questions surrounding the starting 11. Who will start in goal? Svilar or Varela? Will Ruben Dias be ready to take his place alongside Luisao in the back line? Who will start on the left wing?
Goncalves seemed to be Vitoria's first choice in recent weeks, but Cervi seems to be clawing his way back into the 11. I'd personally opt for Zivkovic, who in my opinion, is one of our top 5 most talented players along with Jonas, Krovinovic, Grimaldo, and Pizzi, but Cervi's incredible defensive work-rate could come in handy against Porto's Ricardo Pereira. The good thing is that he will largely have a fully-fit squad at his disposal.