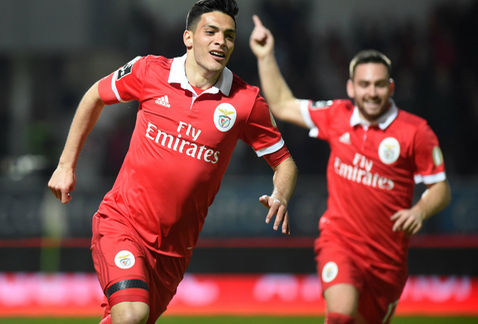 Matchday 27 of the Primeira Liga rolled out the red carpet with a new setting at the top of the table, birthed by FC Porto’s impromptu slip-up versus Paços de Ferreira last week.

Defeat for the Dragons meant bitter rivals Benfica could position themselves to overtake the table-toppers with a win over Feirense, which Rui Vitória’s duly did thanks to goals from Raúl Jiménez and Rafa Silva in a 2-0 victory.

Porto quickly reclaimed top-spot later on Saturday night, skipping past Boavista with a 2-0 win to reclaim their two-point-advantage over the Eagles.

The same scoreline was replicated at Alvalade, where Sporting kept their title hopes alive with a convincing triumph over Rio Ave before the international break. Here’s how the action at the top unfolded.

Widely considered as one of the toughest tests left on Benfica’s calendar, the title holders took to Santa Maria da Feira with a view of heightening the pressure on first-placed Porto, ahead of their must-win game versus Boavista.

A two-minute salvo, commencing in the 34th minute, almost saw the Red & Whites put their plan in motion through Rafa’s close-range shot onto the outside of the near-post, with André Almeida following up with a free header way over the bar moments later.

A first-half red card for Feirense’s Tiago Silva promised to facilitate things a little aftr the interval, however, with Benfica finally breaking the deadlock on the hour-mark through Jiménez’s opportune volley into an empty net.

The Mexican played his part in the visitors’ second, setting Rafa through on goal prior to the winger rounding the keeper in the 74th minute, as Feirense closed out their 2-0 defeat with a second sending off to stomach.

With their coveted top-spot under direct threat, only a win would suffice at the Estádio do Dragão, as local rivals Boavista came to town for the second Invicta Derby of the season.

Felipe left a handful of minds at ease with a second-minute opener for Porto, but the visitors remained keen to plug away at the other end, as the two sides settled for a 1-0 scoreline going into the break.

The to-and-fro was renewed in the second period before Héctor Herrera looked to secure all three points with Porto’s second goal in the 62nd minute, taking full advantage of a sloppy short goal-kick by Boavista number one Wagner to burst into the box and finish easily.

A win for Sérgio Conceição’s men sees them hold tight to top spot, two points ahead of second-placed Benfica, with an away date with Belenenses awaiting them on the flip side of the international break.

Following a series of heavy defeats in the months of January and February, Rio Ave looked to avoid the same fate here at the Alvalade with a newly-assembled five-man defence, as Sporting aimed to keep up with its win-laden rivals.

The extra body at the back would do little to deter the Lions from racking up the chances, with none other than Bas Dost sniffing around Bruno Fernandes’ crossbar-bound free-kick but the Dutchman was thwarted on the follow-up by Cássio’s fingertips.

Some much-needed composure and trickery from Gelson Martins allowed the winger the space to fire Sporting ahead, picking his spot with a shot across goal in the 24th minute.

The opportunities kept coming for the Lions, who saw their wait for another goal extend itself deep into the second period. The woodwork delayed the inevitable, denying both Fábio Coentrão and Bruno Fernandes.

Through the widely celebrated Gelson-Dost combination, Sporting landed their second and final blow in the 83rd minute as the striker used his head to conclude a 2-0 victory.

The title race keeps heating up. Won't be a boring season.