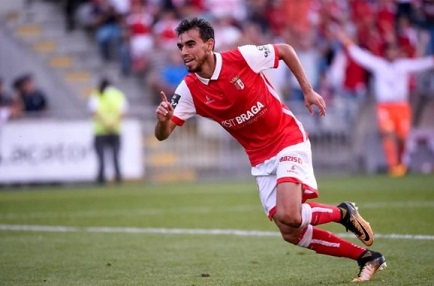 It was a routine weekend for Portugal’s “Big 3” as Porto, Benfica and Sporting all recorded comfortable 2-0 victories, but one side that continue to catch the eye and look to break into the aforementioned group is Abel Ferreira’s Braga.

They arguably turned in the best performance of the round with an emphatic 4-1 win away at Chaves, and the star of the show was a talented player who has shown considerable improvements in the past few games. Ricardo Horta is PortuGOAL’s Figure of the Week.

Ricardo Horta had a successful loan spell with Braga from La Liga team Malaga in 2016/17, and the Arsenalistas made the move permanent last summer on a free transfer. While this campaign has not been all plain sailing on a personal level, Horta is one of the most improved players in the division in recent weeks, and now his numbers are starting to reflect this: in Sunday’s 4-1 win over Chaves Horta brought his tally to a very respectable 8 goals and 4 assists in 22 Liga NOS games in 2017/18.

After Bruno Viana had given Braga an early lead, Horta doubled it in style with a goal he both started off and finished. His superb pass from deep found Ricardo Esgaio on the right flank, whose cross somewhat fortunately found Horta, although he deserved this slice of luck, impressively following up his original pass with a lung-busting run into the box before showing a cool head to guide the ball into the corner.

In the 73rd minute the game was made safe as Horta turned provider. Marcelo Goiano won the ball in the Chaves half, and picked out Horta in the middle, who showed brilliant awareness and ability to help the ball onto striker Paulinho, who chipped past Ricardo Nunes for 3-0.

Chaves striker Platiny had reduced the scoreline to 3-1 with an excellently-taken goal of his own, but Horta would have the final say, re-establishing the three-goal lead in stoppage time. This time a far more simple task, tapping into an empty net from Jefferson’s cross.

Horta has been in and out of the team this season, often falling victim to the manager’s rotation policy, largely down to their busy early campaign schedule because of involvement in the Europa League. However, with more recovery time between games, the best XI is becoming a little clearer and Horta is becoming an increasingly integral cog.

Interestingly Ricardo’s pique in form has coincided with that of his brother André, also currently of Braga. The siblings have linked up very well in recent games in particular, and have been a key part of the team securing 4th place with ease, as they have now mathematically done. Third place is a tricky prospect, but not out of the question, with Braga currently 4 points adrift of Sporting – coincidentally Braga’s next opponents after the international break at the Quarry.

Some calls on Twitter even queried a Seleção callup for Horta to build on his one appearance for the national team, such is the level of his form. While making the World Cup squad this summer is almost certainly beyond him, such is the level of competition among Fernando Santos’ men, there’s no doubt that Horta represents one of the finest Liga NOS bargains in recent years, and at 23-years-old, is only going to improve.