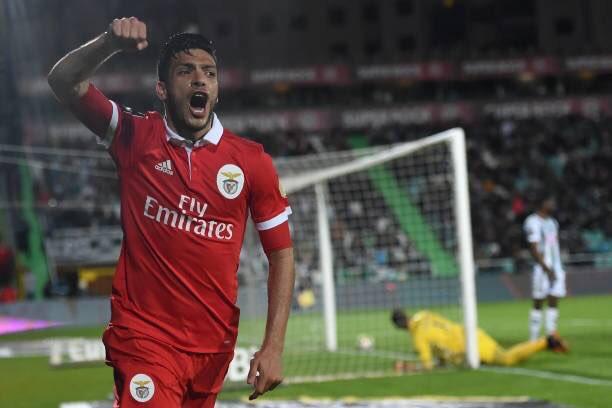 The recent change of scenery at the top of the Primeira Liga saw Benfica come out at the Estádio do Bonfim at the weekend looking to firm up their bid to secure a fifth straight league title from the lofty heights of first place.

In Jonas' absence, Rui Vitória's men required a late Raúl Jiménez penalty to do so, however, with a 2-1 victory away to Vitória de Setúbal keeping FC Porto a point's distance from the top of the table, following their 2-0 win versus Desportivo das Aves.

Last in action were Sporting, dipped into a very public dispute between players and its club president, Bruno de Carvalho, but the club's key stars still had some energy to level at Paços de Ferreira, who were defeated by a 2-0 scoreline at the Alvalade.

All eyes of Benfica supporters were on a victory in Setúbal, with the odds heavily favouring the away side, but the Eagles were dealt a blow before kickoff with the news they would be without their goal-laden talisman Jonas, who picked up an injury in the warm-up and was not risked ahead of the clash against Porto next weekend.

The problems mounted for the Red & Whites, as Costinha fired the hosts ahead as early as the second minute with a back-post volley into the far corner, with Benfica looking to offer a reply through a handful of efforts from Franco Cervi and Jardel.

Jiménez ensured a timely bounce-back for the title holders in the 28th minute, reading the trajectory of Rafa Silva's cross to tap in at the far-post, as Benfica took a 1-1 draw into half-time.

Edinho could have reclaimed Vitória's lead in the 62nd minute, but struck Nuno Pinto's cutback way over the bar from inside the box, with the Eagles looking to make the striker pay through Jiménez and Salvio.

With no answer in open play, Benfica were given the chance to secure all-three points in the 92nd minute via the penalty spot as Luís Felipe's grabbing of Salvio shirt prompted the Argentine to take to the ground. Jiménez was the man elected to step up to the spot, making no mistake from 12 yards to keep Benfica at the summit of the table.

Only a win would suffice for Porto at the Estádio do Dragão, as they welcomed a Desportivo das Aves side desperate to distance themselves from the Primeira Liga relegation zone.

A clear foul on Ricardo Pereira inside the area set the Dragons up for the ideal start, as Alex Telles converted from the spot inside the first three minutes to give Sérgio Conceição's men a 1-0 lead.

That advantage was soon doubled in the 10th minute in a freak effort from Otávio, blocking a clearance from the edge of the box to find the bottom-left corner.

Yacine Brahimi pushed the hosts closer to a third goal in the 36th minute, as he pounced onto Moussa Marega's cut-back from the right before finding the top of the crossbar with a guided effort.

Rather than the framework, it was Aves' Adriano Facchini who stood between Porto and goal number three in the second period, with the Brazilian keeper starring to keep the score at 2-0 come full-time.

Despite the rumours of wholesale changes to Sporting's regular XI, courtesy of a number of in-house suspensions hanging over the heads of numerous first-teamers, Jorge Jesus called on a large portion of big names to take on Paços de Ferreira at the Alvalade. William Carvalho and Fábio Coentrão were out injured, while Cristiano Piccini was suspended.

The players responded to the love shown from the stands at kick-off, with Bas Dost reacting first to Bruno Fernandes' flick-on to nod in at the back-post, placing the Lions a goal ahead in the 20th minute.

Sporting's search for a second was on following the interval, with Gelson Martins and Sebastian Coates forcing Mário Felgueiras into action in the 52nd minute on separate occasions.

Jesus' men secured their 2-0 win through Bryan Ruiz, with Gelson again at the heart of the move, as the Costa Rican playmaker thanked the winger's pull-back to curve a shot into a semi-vacated net in the 65th minute.