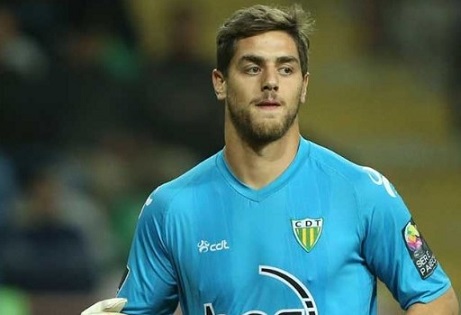 There was plenty of drama in Week 32 of Liga NOS as Porto left it late to all but seal their first league title since 2013 with a win over Marítimo, while Sporting moved into a strong position to seal Champions League qualification by beating Portimonense.

None of this would have been possible though without what was undoubtedly the story of the weekend, Tondela securing the upset of the season with a stunning 3-2 win away at defending champions Benfica.

One of their biggest heroes of the day has been a regular saviour for the Auriverdes over the past two years or so, goalkeeper Cláudio Ramos, who is PortuGOAL’s Figure of the Week.

We’re highlighting a Tondela player for the second week in a row in this feature but there was simply no other option after one of the most surprising results of the last few years in Portugal. The last time Benfica tasted defeat at Estádio da Luz in league competition to opposition that wasn’t either Porto or Sporting was way back in August 2010, when a late Laionel goal gave Académica a 2-1 victory. It almost goes without saying that each Tondela player’s performance in Saturday’s win was exceptional, but they had Ramos specifically to thank on more than one occasion.

Arguably for a goalkeeper of his proven class, Ramos might have done better with the opening goal for Benfica, Pizzi beating the Tondela keeper at his near post. What followed though was a near faultless performance which showcased everything he is good at. In the 19th minute Benfica playmaker Andrija Živković almost doubled their lead with a great strike from range but Ramos was able to palm it safely wide.

Benfica had the bit between their teeth and Franco Cervi went close to 2-0 in the 24th minute. The officials somehow failed to spot it, awarding a goal kick instead of a corner, but the Argentine winger was denied by a terrific save from Ramos.

Tondela had turned the game on its head by half-time, Miguel Cardoso’s double giving them a 2-1 lead to protect going into the second period. Inevitably, the Tondela defence faced an avalanche of Benfica attacks. Although a more routine save, Ramos had to be alert again in the 47th minute to divert away an effort from striker Raúl Jiménez.

The pressure continued and Ramos kept out Rafa Silva’s deflected effort in the 54th minute too.

Ramos’ big moment came in the 73rd minute, pulling off the type of save that has rightly earned him the reputation as one of the very best goalkeepers in the division. He displayed superb reflexes to get down and keep out Raúl’s close range shot with his feet, preserving Tondela’s hard-fought lead.

It was a magnificent stop that would prove so crucial as Tondela ultimately added to their tally to further stun the Benfica faithful. Eduardo Salvio pulled a goal back for the hosts in the stoppage time, but it was too late, and a little bit of history was made.

One of a few characteristics that Cláudio Ramos shares with the legendary Iker Casillas is his ability to reserve his very best for the big occasions. Ramos has regularly stumped Casillas’ Porto over the past couple of seasons with some almost superhuman performances between the sticks and he showed off this quality yet again at the Luz.

Unsurprisingly Ramos is now a wanted man. Calls on Twitter have suggested Saturday’s opponents Benfica should look to bring him in as their new number one, particularly as the Eagles have experienced troubles of their own in the position throughout the season.

There have even been calls for a place on the plane to Russia this summer for Ramos as recognition of his consistency. Ironically, the man many want him to replace at Benfica, Bruno Varela, appears to be ahead of him in the race for a spot in the Portugal squad for the FIFA World Cup 2018, where the European Champions will be hoping to shock the football world for a second tournament running. Visit world cup best predictions to participate in the greatest sporting show on earth that begins in Russia in June.

Getting picked by Seleção coach Fernando Santos for the upcoming tournament may prove a dream too far, but the 26-year-old has certainly made an outstanding case for selection at some point. A big move this summer could see such dreams become a reality in the coming years.

Great Goal keeper. Deserves to be playing for a bigger team hope Benfica goes for him. Or Sporting if Rui leaves