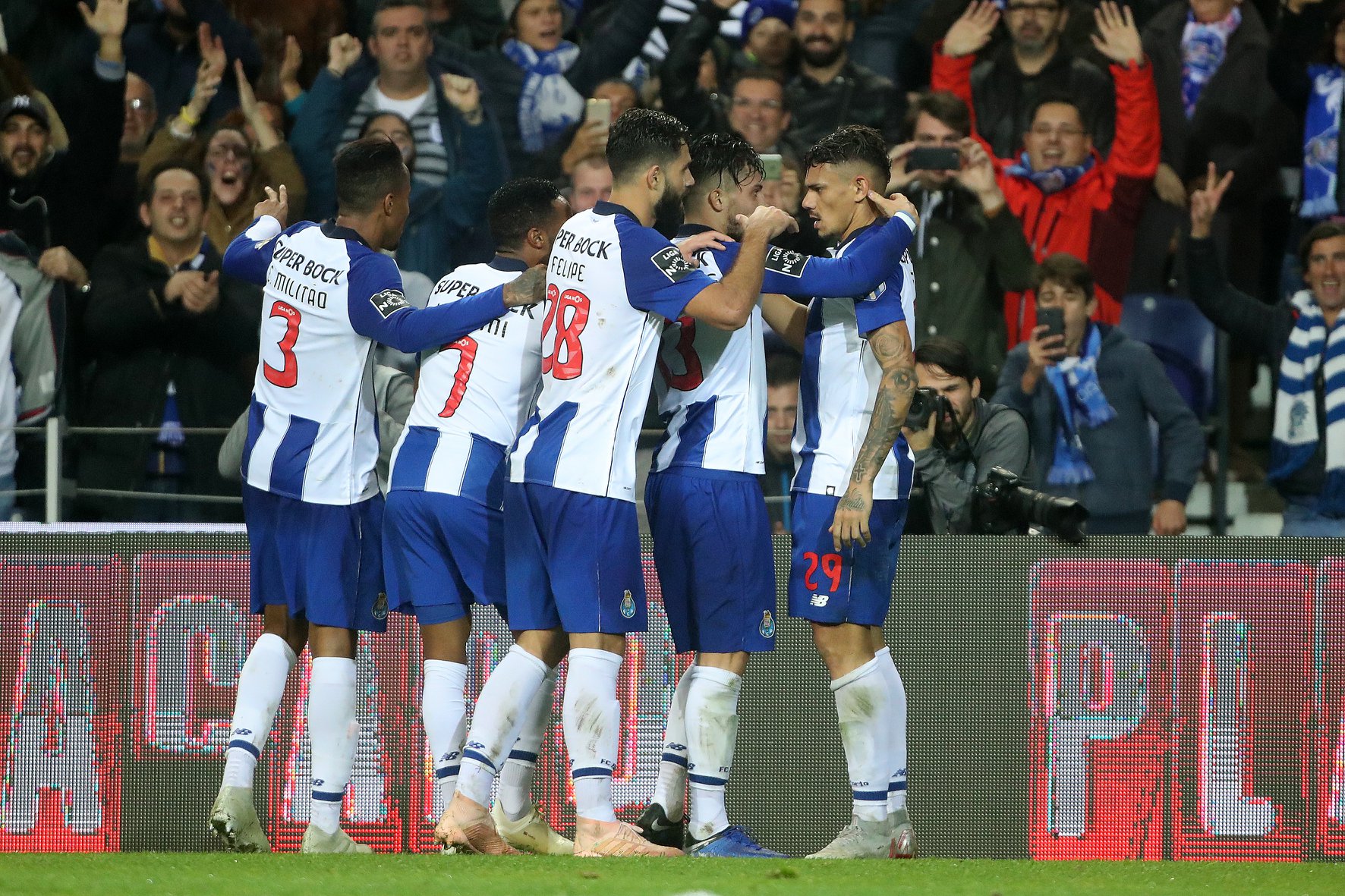 With another potentially decisive week in store for the Primeira Liga universe, much of the attentions were turned towards the clash between table-toppers FC Porto and Sporting de Braga at the Estádio do Dragão, last Saturday.

The two contenders traded blows, but it was Tiquinho Soares in the 88th minute that would make all the difference, as a 1-0 win for the Dragons placed them three points clear at the top.

Also on edge was Rui Vitória in Benfica’s visit to Tondela, desperate for a win to ease the talk on his future at the club, and despite the hosts taking the lead after just one minute, three goals in response saw the Eagles bounce back with a much-needed 3-1 victory.

Lastly, in Tiago Fernandes’ final game in charge of Sporting as interim boss, the Lions were able to conclude a satisfactory week with a testing 2-1 win at home to Chaves, keeping the Lions just two points off the top in second place. PortuGOAL brings you the top weekend action.

In a straight tussle between first and second, both on 21 points, the stakes were high at the Dragão before the pending international break. Efforts began to materialise at both ends in the early stages, with the best chance falling to Dyego Souza in the 24th minute, as he flashed his glancing header wide of the far post from Ricardo Horta’s cross.

The hosts replied through Yacine Brahimi, discovering the time and space to strike at goal inside the box before being encountered with a quality Tiago Sá stop in the 37th minute.

Inseparable at half-time, the two outfits recharged for the second period where Ricardo Esgaio would offer the home support a huge scare, lining up for the strike from outside of the box and smashing the face of the crossbar in the 55th minute.

Porto continued to wobble as Braga were denied by the frame of the goal once more in the 77th minute, this time via Fransérgio’s guided shot from a cut-back.

Braga’s fortunes were compounded late, however, as substitute Otávio aimed a cross towards the far-post for Soares to attack, enabling his Brazilian compatriot to fire in a headed effort in the 88th minute.

The late grab saw Sérgio Conceição’s men claim an at times unlikely victory, opening a three-point gap between them and Braga, who slip down to third in the league table.

After failing to beat Ajax at home in the Champions League, plenty was riding on a positive result away to Tondela in the rain for Vitória, as rumours concerning his future continue to intensify.

The northern outfit wasted no time in ramping up the heat on the Benfica boss, as Germán Conti helped on Jhon Murillo’s cross into the back of the net for an Eagles own goal, less than a minute in.

Benfica hit back promptly through Jonas in the 10th minute, climbing high to direct André Almeida’s delivery into the far post and equalise. Darting into the box, Rafa Silva came close to completing the turnaround with a low shot across goal, as the Portuguese winger found the far post instead to rob him of the occasion on the half-hour mark.

A handy bit of redemption for Conti saw the Argentine deny Murillo’s cheeky chip over Odisseas Vlachodimos with a volleyed clearance off the line, as the two sides took to the break with a 1-1 draw.

Tondela didn’t have the restart they would’ve hoped for, losing David Bruno to a second yellow card for a push on Franco Cervi long after the referee’s whistle, but that wouldn’t stop the hosts threatening at Benfica’s end, as Odisseas reached to stop Xavier’s header from nestling into the top corner in the 59th minute.

Neat play in the 64th minute saw André Almeida land a second assist in the game, cutting a pass back for Haris Seferovic to tap in and place Benfica in the lead for the first time in the encounter.

Tondela had a golden opportunity to equalise through Xavier, one-on-one with the goalkeeper, but the home team’s danger-man somehow managed to drag his finish wide from a prime position. Benfica punished the hosts at the other end thanks to Pizzi’s improvisation, the midfielder’s back-heel unlocked Rafa in behind the defence in the 75th minute, who claimed goal number three with a shot aimed at his near post.

The hosts would end the game reduced to nine men, following Ícaro Silva’s tackle from behind on Rafa Silva in the 85th minute, as the Eagles steered themselves back to winning ways with a 3-1 victory at the Estádio João Cardoso.

With new boss Marcel Keizer in attendance, Tiago Fernandes marked the end of his stint as interim coach with a fixture versus point-hungry Chaves, currently bottom of the Primeira Liga.

A slow start saw the game light up in the 22nd minute, as Marcos Acuña picked out Bas Dost successfully with a lifted cross into the box, allowing the Dutchman to nod in freely and give Sporting the lead with a header off the inside of the post. Bressan was caught offside in his attempt to equalise in the 40th minute, concluding a half in which there was very little action to get stuck into at the Alvalade.

The second half proved to sing from the same hymn sheet before a lunge on Acuña from Bruno Gallo, albeit one that made contact with the ball, saw the Chaves man earn a straight red card with 20 minutes to play.

That wouldn’t stop the away side bothering Sporting, however, as a moment of magic from Niltinho saw the Chaves man bend in a shot from range and equalise in the 81st minute, in off Renan Ribeiro’s post.

But Chaves’ joy would last just a couple of minutes after William was judged to have impeded Dost from jumping inside the box from a corner, gifting the Lions a penalty late on. In his final act of the day, Dost claimed all three points with another calmly-taken spot-kick in the 86th minute, as Sporting climbed up to second with a 2-1 home win.

That was a tough game – Braga are a strong and well-organised side. Good to see Porto step up!
Great header by Soares.

Porto got lucky, Braga did more to win and those two chances that hit the post but thats football.

I support Sporting but unlike most people I don't turn a blind eye, Sporting did deserve to win but got helped by the Ref. It was a harsh red card...

Porto got lucky, Braga did more to win and those two chances that hit the post but thats football.

I support Sporting but unlike most people I don't turn a blind eye, Sporting did deserve to win but got helped by the Ref. It was a harsh red card and a incredibly soft penalty to give to Sporting, I agree it was to some extent a foul but not enough to actually impede Bas Dost.

Take it easy Eduardo, there are many here, including myself that always speak to the preferential treatment that the big 3 get over smaller teams. Sporting get it, Porto get it, but most of all, Benfica get it. Just look at how long it's taken...

Take it easy Eduardo, there are many here, including myself that always speak to the preferential treatment that the big 3 get over smaller teams. Sporting get it, Porto get it, but most of all, Benfica get it. Just look at how long it's taken to process Benfica regarding the latest bribing scandal. And I am wiling to bet money there won't even be a symbolic punishment like Porto had in 2008 (which as a Porto fan, I admit, was a joke, Porto should have gotten more punishment).

Regarding Porto over the weekend, luck had something to do with it, but depending how you look at it, they deserved the win, or at the very least Braga deserved a draw. I also think Braga were unlucky, but either way, as a fan of the Liga, it was the game of the season to watch. Much better than any of the "Classico's" of recent memory.

There was a lot at stake, but the football was a pleasure to watch. Braga have always been either the 3rd or 4th best team in Portugal talent-wise, but Abel has managed to merge the talent of the team with an organized unit that can play multiple forms of footy. Truly, watching Braga under Abel's spell, I have seen them play possession footy, I have seen them play pressure footy and over the weekend, they played counter-attacking footy that would make Real Madrid's Mourinho proud.

If Porto do not win the league this season, I think Braga should be the ones to take it, and frankly (even as a Porto fan), I think it would be good for the league.