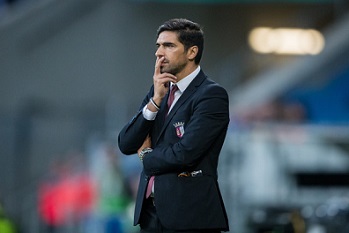 Abel replaces outgoing boss Razvan Lucescu, who recently left the club to move to Saudi Arabia after guiding PAOK to an historic league and cup double last year with an unbeaten domestic campaign.

PAOK agreed a €2.5m compensation package with Braga for Abel and the 40-year-old has headed to the Netherlands to join the team’s pre-season training camp. The move was announced by both clubs on Monday evening, with Abel admitting during a short statement that it had been a very sudden development.

"It was all very fast, I had given two days off to the squad and in two days everything happened quickly,” he said.

“I am grateful for this club (Braga), to these fans, to the whole structure of football and especially to the president [António Salvador] and above all, to our players. There are no good coaches without good players, it was they who made me, together with our football ideas, a competent, ambitious coach who wants to learn every day."

Abel is joined in Thessaloniki by his backroom staff Miguel Martins, Carlos Martinho and Vítor Castanheira. The venture abroad is Abel’s first during his career, having spent his entire playing time in his homeland with Penafiel, Vitória de Guimarães, Braga and Sporting, while the former right-back’s coaching path led him to the junior sides at Sporting and Braga before taking the senior role at the Arsenalistas in April 2017.

In Greece, Abel will find huge shoes to fill, with Lucescu departing as an immensely popular figure after ending PAOK’s 34-year wait for a league title in May. The Romanian left the club to take the reigns at Saudi Arabians Al-Hilal, who had been searching for a high-profile permanent boss since Jorge Jesus left the club earlier this year.

Abel becomes the fourth Portuguese coach in the 14-team Super League ahead of the new season. Pedro Martins is in charge of last season’s runners-up Olympiakos, while Miguel Cardoso took over at AEK Athens this summer, meaning the top three from the last campaign all have Portuguese bosses this year. Luís Castro completes the quartet, having taken the reigns at Panetolikos in May.