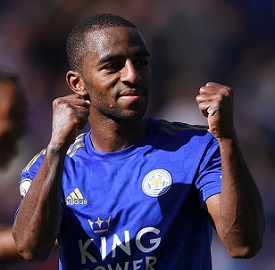 Ricardo Pereira scored his first goal of the season to help Leicester City to victory over Tottenham Hotspur in the early kick-off, before Bernardo Silva took centre stage with a hat-trick as Manchester City crushed Watford 8-0.

Elsewhere in England on Saturday, it was a less happy afternoon for managers Marco Silva and José Gomes with Everton and Reading losing in the Premier League and Championship respectively.

Leicester had to come from behind to beat Spurs 2-1 at the Walkers Stadium in the lunchtime kick-off after Harry Kane’s improvised finish gave the visitors a half-time lead. Ricardo, who played at right-back, levelled in the 69th minute when arriving at the back post to convert from ten yards following good work from Jamie Vardy.

James Maddison gave Leicester all three points with a superb long-range shot, but the performance of Pereira will certainly catch the eye in Portugal as he continues to stake his claim for a Seleção spot. The former Porto man, who was voted Leicester’s double Player of the Year last term, was adjudged by statistical site Whoscored.com to be the man of the match during a game in which he made the most tackles for his side. 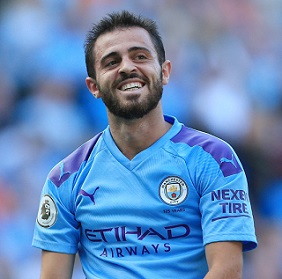 Bernardo Silva followed Ricardo’s exploits by taking a starring role in Manchester City’s 8-0 demolition of Watford. Portugal midfielder Bernardo scored his first-ever hat-trick in a match made more remarkable by City going 5-0 up inside 18 minutes at the Etihad Stadium.

The contest was all but over when Bernardo got his first, with City leading 3-0 through David Silva, Sergio Aguero and Riyad Mahrez when the former Benfica man nodded in from close range following a corner. Ex-Porto stopper Nicolas Otamendi made it five shortly after and the home side eased off until the second half.

Bernardo took over proceedings following the break, getting his second with some nice footwork and finish a couple of minutes after the re-start to put City 6-0 up. Kevin de Bruyne set up Bernardo’s treble on the hour, finding the Portuguese at the back post and Bernardo took his time before finding the net. De Bruyne rounded off the scoring himself with the goal of the match five minutes from time, blasting into the roof of the net from just inside the area.

“I'm going to get all the players to sign my ball and then I'll take it home to Portugal and keep it in a special place,” Bernardo said after the match. "We were unbelievable in the first 30 minutes, scored lots of goals and had control. After the Norwich defeat, it was great to give our fans the result and the performance.

"We aimed to keep it going in the second half. We didn't want them to hurt us or score past us. Football is a hard game - I've won 8-0 today but I've lost plenty of times by five or four goals. You just have to keep going so I wished the Watford players well.

"It was a great performance, 8-0 says everything. It's very good to get the three points after defeat at Norwich and I'm very happy with my first hat-trick of my career. My first match ball at home.”

Meanwhile, Marco Silva’s Everton suffered a damaging 2-0 home defeat to Sheffield United in the Premier League, with the former Sporting boss saying his side “did not deserve” their first loss in eight home matches. In the Championship, José Gomes and Reading were beaten 2-1 at home by Blackburn Rovers.

I wonder how much Bernardo's stock went up?