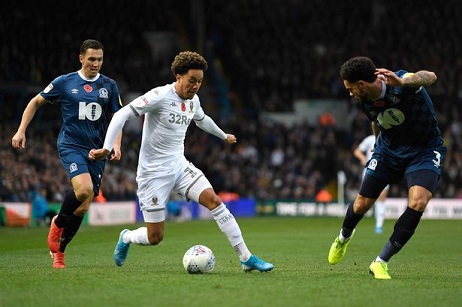 When Hélder Costa arrived at Leeds United on a loan transfer from Wolves in July 2019, there was a feeling of euphoria around the club.

Leeds’ technical director, Victor Orta, had managed to sign the winger that was so influential for Nuno Espírito Santo’s Wolves during their promotion to the Premier League and, what's more, they fought off stiff competition to do so.

Against all the odds, Leeds had managed to sign a man who was very much part of the ever-increasing Portuguese influence on the English Premier League.

This was, after all, a player who had scored on his international debut against Scotland and was now heading to join the Marcelo Bielsa revolution at Leeds.

As far as coup signings in the Championship go, this was right up there with the best and it came at a time which gave Leeds United reason to believe again after suffering an agonizing semi-final defeat to Frank Lampard’s Derby County. Leeds had got their man - and the Championship defenders were going to pay the price.

It was Matt Doherty and Helder Costa to the rescue #OnThisDay in 2017. 🙌

Two goals in the last five minutes secured the win away at Brentford!

The West Yorkshire club had revenge on the agenda, and the dangerous Costa was going to bring panic to a football ground near you.

The truth of the matter is that it hasn’t really played out that way, with Hélder Costa yet to rediscover the form that made him one of the Championship’s best players during the 2017/2018 season. Leeds have seen glimpses of his brilliance but, in truth, those performances have been few and far between, with Costa’s stats reading 30 starts for Leeds in the league, with only two goals and three assists.

Costa’s most successful appearances for Leeds have come in the Carabao Cup where he has one goal and two assists in just two appearances. But it is the league where the Whites need their star winger to turn it on like he did at Molineux.

In comparison, Costa's time at Wolves yielded 19 goals and 19 assists in just 106 appearances. Not much can be said in way of mitigation either given that, since the winger arrived from Benfica to join Wolves, he hasn’t suffered any sort of injury that could account for his drop in form. During his time at Leeds, Costa has been an almost ever-present who, in all honesty, probably doesn’t even know where the treatment room is, such is his good health.

So whilst injury hasn’t plagued Costa and turned him into a shadow of the player he was, he still seems to be lacking that final ball that could turn Leeds from near hopefuls for promotion into outright winners of the division. Any logical take would be that the 26-year-old is in his first season with Leeds and is still finding his feet, which at the end of the day is perfectly reasonable, especially given Bielsa’s famed very specific methods. The thing about that is Leeds don’t have time for Costa to find his best form when they are in a promotion race that seems to be getting away from them.

That is at least what betting site Betway thinks having priced Leeds at ¼ for promotion as of the 3rd of February. That may seem like low odds still but bear in mind, Leeds were at 1/12 to go up at the start of January. This is all of a sudden not playing out the way the West Yorkshire club had envisioned, and it wouldn’t be unfair to say that a few of their key men are letting them down at a time where they had expected them to carry the club forward, Costa included.

Indeed, there was a certainty among the hierarchy at Elland Road that Costa would hit the ground running, so much so that they promised Wolves £15m at the end of the season, regardless of which division they found themselves in. That is a fortune to pay for a player at any club in England’s first division. Furthermore, with most of Leeds annual revenue spent on wages, it’s hard to see how this type of transfer won’t end up with the FA asking Leeds to explain why they have not fallen in line with Financial Fair Play rules.

All is not yet lost

If you were to take a walk around Elland Road on match days and engage with some of the fans about their thoughts on Costa whilst they sipped on a pre-match beer in the stadium concourse, you will find a fanbase that have actually taken to the Portuguese winger. The supporters have a lot of time for the man that races up and down the right flank; not to mention, his goal against Cardiff City in a 3-3 draw was one of the best moments of Leeds’ season.

🎯 THAT pass from Pablo... pic.twitter.com/0An9qpnIj9

There is just a feeling that the 26-year-old has the skill to grab this promotion race by the scruff of the neck and get the Whites over the line. Maybe that’s the problem with being the best player in a team, and the expectation that comes with it; you’re called on to do more when you’re producing the same performance as the man next to you. But for Costa to make his time at Leeds a success, he will need to find that extra gear that will see Leeds accelerate away from the chasing pack.