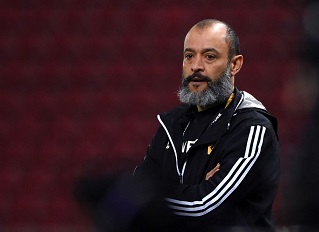 The Europa League meeting of two clubs with large Portuguese contingents was somewhat anti-climactic in spectacle but eventful in storylines as Olympiacos hosted Wolverhampton Wanderers in Greece.

Supporters were not allowed to attend the match in Piraeus owing to precautions relating to the coronavirus epidemic, meaning the highly-anticipated clash between Pedro Martins’ Olympiacos and a travelling Wolves led by Nuno Espírito Santo lacked the atmosphere it deserved. Rúben Semedo and Pedro Neto were the key protagonists on the night as the teams shared the spoils in a score draw.

Wolves arrived in Greece with great reluctance, having asked for the match to be suspended in the wake of Olympiacos owner Evangelos Marinakis tested positive for the coronavirus earlier this week. Indeed boss Nuno told reporters before the match: “You realise what is happening worldwide: people dead, and dying. Then you play a game of football. It’s absurd.”

It would be former Sporting stopper Semedo at the heart of the first half’s major moment on 28 minutes. The Olympiacos defender brought Jota down on the edge of the penalty area during a Wolves break, and Semedo was immediately penalised and shown a red card by French referee Clement Turpin for clear denial of a goalscoring opportunity.

Despite being reduced to ten men with less than a third of the match played, the Greek Super League leaders remained competitive and surprised their opponents by taking the lead early in the second half through Youssef El-Arabi. By that point Nuno had increased his Portuguese legion to six with the half-time introduction of former Braga forward Neto.

It would be the 20-year-old to level things with the crucial away goal midway through the second period, with Neto receiving Moutinho’s lay-off from a free-kick before hitting a shot which deflected off an Olympiacos defender before nestling in the back of the net. The goal was Neto’s second in his season’s competition and his first in all competitions since mid-January.

Daniel Podence entered the action for Wolves ten minutes from time against his former side, but the contest ended square with plenty to play for in the return leg. “It was very tough, the beginning was strange, both sides were missing someone to push. It was not a very good game,” Nuno admitted afterwards.

“Once they were down to ten, we controlled the game, we had possession of the ball, but we didn’t unbalance them enough to create chances. It stays with me for me to work on and analyse and try to project for the next one to see what we have to improve.”

Former Vitória boss Martins was positive about what he saw from his side. “I am very pleased and if our stands were not empty and the conditions were otherwise we would have had a very good result because we played with soul.

“Given the conditions, in an empty stadium, we played very well. We played with the heart, scored a nice goal and created opportunities. The sending off changed the game a lot. We had almost 80% possession against a very strong team that is competing to be in the Champions League.

“I honestly don't think Olympiacos's journey ends here. We are ready to go to England and qualify.”