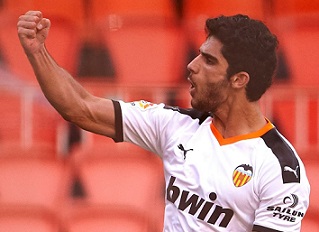 Just when it seemed that Pedro Neto had scored the goal of the weekend in the Portuguese Abroad section after his sensational volley in England on Saturday, Gonçalo Guedes emerged on Sunday evening to produce one of the moments of the season for Valencia.

The former Benfica man’s incredible solo goal set Los Ches on the way to victory in La Liga, while later in the evening midfielder Cafú opened his account for Olympiacos in Greece as Portuguese continue to find the net across the continent. Luis Castro secured the Ukrainian championship with Shakhtar Donetsk, meanwhile, marking the first trophy of his coaching career.

For former Benfica man Gonçalo Guedes, Sunday evening’s goal has been a long time coming after another season disrupted by injuries. The forward took to the field at the Mestalla without a goal to his name all campaign, of which he missed a large period with an ankle injury. Guedes finally ended that drought after a little over ten minutes, beating four Osasuna defenders before firing into the top corner for a sensational individual strike.

Takes it from halfway, beats four players and then the keeper! 😱

After they had an early goal disallowed Valencia now have their lead 🦇 pic.twitter.com/HpUEpYrcNF

The 23-year-old went on to lay on the assist for the second goal scored by another former Eagle, Rodrigo, and went on to play 70 minutes before being substituted much to his frustration. Challenged about Guedes’ reaction to being withdrawn, Valencia boss replied: “He has played all three games. There are many ahead, the context of the heat, wear and tear and we want to take care of the players. I hadn’t seen his anger. It is not so important. What’s important is leaving with the right attitude.”

"A great goal, an assist, an injury scare and then frustration at being substituted. Pure Guedes in 70 minutes. A match at Mestalla that summed up his three years." 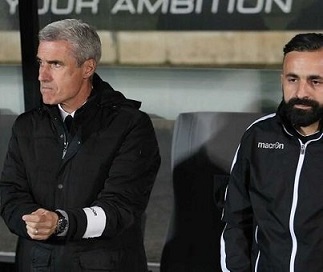 Luís Castro is celebrating after his Shakhtar Donetsk side were confirmed champions of Ukraine with five matches left to play. Castro’s men came from 2-1 down to beat Oleksandria 3-2 on Saturday and move 19 points clear of rivals Dinamo Kiev at the top of the Premier League.

“From the very first day here, we have been building our successful path with the main goal of winning the title,” Castro said during his post-match press conference. “Today, we’ve managed to do so. Anyone who sees our lead in the table might think that was easy. But no one gifted us anything - we achieved this by our work, dedication, ambition and respect for each other. We spent a huge number of days working as a family to claim the title. And now, we have this sense of accomplishment.

“We are delighted to see our fans, the team staff, the administration, the president and, of course, the coaching staff being happy. The Shakhtar family is happy! We’ve added another title for this great club.”

Dedicated to those “oppressed by society”

Castro also made a statement in keeping with the current social campaigns for equality, dedicating his team’s success to those facing the barriers of discrimination. “I dedicate this title to those who strive for success and society does not give them the chance to achieve it. Many want to grow and are oppressed by a society that gives opportunity to some and not others. I dedicate this title to them, to those who struggle to have that chance and cannot.” 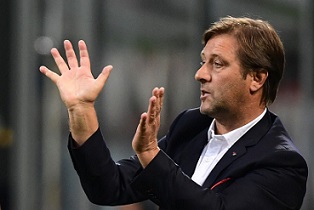 Pedro Martins is all but certain to join Castro in celebrating guiding his team to glory after Olympiacos brushed aside eternal rivals Panathinaikos in Greece to move a step closer to securing the title. A 3-0 win means Olympiacos are now 19 points clear of PAOK with seven matches remaining, meaning one victory will confirm them as champions.

The win over Panathinaikos on Sunday was also notable for midfielder Cafú opening his account for the club following a winter move from Legia Warsaw. José Sá and Rúben Semedo both started the game, while Cafú emerged for the last half hour and rounded off the scoring in stoppage time with a nice finish from outside the box.

Pedro Martins’ side are now just one victory from being confirmed Greek champions pic.twitter.com/XmZ7UWEJhI

“Nothing was easy today, it may have seemed so, but we worked very hard,” boss Martins said of his side, who remain undefeated in the league. “We had a great first half and we were the ones who made it look easy. Panathinaikos is a team with very good players and a very experienced coach but today we had such a half that it was very difficult for any opponent to face us. We showed why we are the first and why we are in that position.”

Defending champions PAOK, led by coach Abel Ferreira, are still in second place after beating OFI 3-0 without Vieirinha. PAOK’s outside hopes of the title were ended in March when they were docked 7 points for breaching ownership rules, since when Olympiacos have widely been expected to cruise to the championship.

Lucas João made a goalscoring return to action in the English Championship with Reading, scoring on his first appearance since New Years Day. The 26-year-old had been in excellent form towards the end of 2019 before being laid low through injury, but João showed little signs of rust as he scored the opener in Reading’s 1-1 draw against Stoke on Saturday. During his celebration the striker also acknowledged the current social fights for justice with a powerful gesture.

Lucas João with a powerful celebration after scoring for Reading in the Championship pic.twitter.com/h3qxrYXUZU

Elsewhere, there was a Portuguese penalty goalscorer on both sides in Greece as AEK Athens drew 2-2 at home with Aris on Saturday. Nélson Oliveira earned a point for AEK from the spot with five minutes left to play, with Bruno Gama’s pen having opened the scoring in the match for Aris early in the second period.

Veteran forward Marco Paixão scored a brace in the Turkish second tier for Altay, while Ricardo Quaresma was a starter for Kasimpasa in the top flight as they strengthened their survival hopes with a 2-0 win over Fenerbahce. Paixão’s old home, Polish football was the setting for goals for Pedro Tiba (Lech Poznan) and Rafael Lopes (KS Cracovia) while Mickael Almeida was among the goals for Chiasso in the Swiss second division.

Guedes' goal is excellent but he needs to start contributing on a regular basis - he's been given plenty of chances to prove himself. I've watched him loads of times these past few seasons and he's a very frustrating player! Celades isn't a good...

Guedes' goal is excellent but he needs to start contributing on a regular basis - he's been given plenty of chances to prove himself. I've watched him loads of times these past few seasons and he's a very frustrating player! Celades isn't a good manager admittedly but he didn't do enough under Marcelino either. Marcelino is quite straight-forward in that if you do what you're told you'll get gametime and if you don't you wont.
On the flip side Valencia cant seem to decide if he's a winger/forward/striker or second striker so its no wonder he looks confused at time.
Wonder if Guedes would do better at Wolves?