Unpaid wages, exclusion from the pitch and “the best atmosphere I’ve played in” – Pedro Rebocho reflects on turbulent year with Besiktas 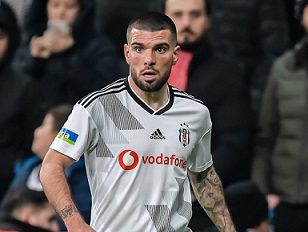 When Pedro Rebocho arrived at Turkish club Besiktas on a season-long loan deal last summer, many who had followed the Portuguese full-back tipped the move as a potential bargain for the Istanbul giants.

Almost 11 months on and Rebocho has departed the club after a year disrupted by unpaid wages and exclusion from the team due to contractual stipulations, leaving the former Benfica man to reflect on a mixed experience in a city and fanbase which lived up to expectations sadly unfulfilled by his employers.

Rebocho found himself in-demand in the summer of 2019 having impressed regularly while playing for relegated Guingamp in France’s Ligue 1. The Brittany club’s relegation meant an exit was inevitable for the left-back after he amassed 12 assists in all competitions and was shortlisted for a place in the end of season Team of the Year awards.

Related article: Where next for Pedro Rebocho? Clubs circle round Guingamp’s Portuguese gem

Interest in England from Leicester City and Watford as well as various teams in France was reported, but it was to be Turkey and 15-time champions Besiktas winning the battle for Rebocho’s signature on a season loan with the option of a permanent deal.

Rebocho featured regularly during the Autumn in his new surroundings but, having seen his involvement cynically reduced, his loan deal ended earlier this month and the Portuguese headed back home while his teammates prepared to play out the remainder of the season following the re-start in Turkey.

Speaking to O Jogo, the 25-year-old admits that the experience has been far from what he had hoped. “[It was] positive, but at the same time with a bittersweet flavour,” Rebocho said. “I had very good moments, but from January on, everything changed and the season didn't go as I expected. I loved Istanbul, the fans, the stadium, which had the best atmosphere I’ve played in. But there were also less positive parts.

“There was a clause in the contract that stipulated that when I reached 20 games at the club, Besiktas had to buy me. But, after I made the 17th match, the assistant coach came to talk to me and 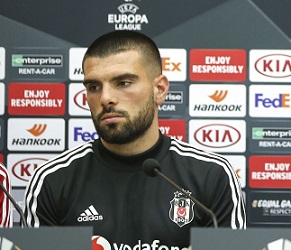 said: "As you know, the club is very bad financially and the directors are not going to trigger your purchase clause.

“That's why you’re not going to play the next game. You’re supposed to play today, but until your situation is resolved, the management says you don’t play ". From then on, I didn't play anymore. I was called up a few times, but I felt that it wasn't with the intention of getting me to play.”

Rebocho’s fee was minimal, believed to be no more than €2-3m, but the desperate nature of the club’s financial problems were to be imposed even more personally on the loanee. Rebocho says he was never paid on time and is still owed money by the club, despite having already ended his association with Besiktas.

“I went without pay for six months and at the moment I still have overdue wages. With these problems I lacked the motivation to play. Was it due to the pandemic? No. It has happened since I arrived, as I never received a salary on time. Right from the start they were two months behind. Not long ago, I was owed four months wages plus rent on the house that I paid as they promised to repay me. They have since paid two months wages, so they are now two months overdue.

“We thought of presenting the case to FIFA, but they paid two months so we won’t do that anymore. This was not my goal either. I didn't want to get in trouble with the club, because I felt good there. And the financial issue is not even about buying clothes, or buying a car, it has nothing to do with it. It's just because I have a family, I have bills to pay and I don't have to be thinking, "What if I don't pay this bill?”

Looking back with fondness

Despite the problems, Rebocho prefers to maintain a balanced view of the experience, which he says can be remembered fondly due to the way he was received at the club. “Of the fans I have no reason to complain,” he says. “They have always supported me and even when I said my farewell I received many positive messages from them.

“It was an incredible experience, but it was unfinished. I would go back because there was a fondness for the club, city, fans. For me, the positive side counts more than the negative. What I take from there are the good times I had.”