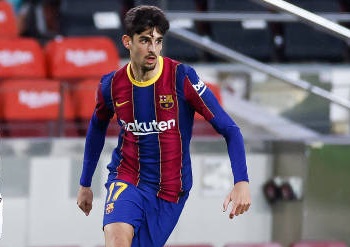 Francisco Trincão has officially arrived at Barcelona. After scoring his first La Liga goal last weekend at Real Betis, the Portuguese winger scored twice on his full league debut to help Los Cules to a 5-1 hammering of Alaves at Camp Nou.

Trincão, who had experienced some harsh criticism from local media during a quiet first half of the season following his move from Braga, scored for the first time at his new home stadium as Barcelona produced the perfect warm-up for their midweek Champions League meeting with Paris Saint-Germain.

Having scored the vital late winner against Betis, this time Trincão was issued an overdue first La Liga start and opened the scoring against Alaves on 28 minutes with a clinical left-foot finish after being picked out by young debutant Ilaix Moriba. Lionel Messi doubled Barca’s lead but Luis Rioja halved the deficit for Alaves early in the second period, meaning Trincão’s alert follow-up finish to score in the 74th minute was a crucial moment to put Barca 3-1 ahead.

Messi and Junior Firpo added further goals, as Trincão remained on the pitch to complete his first full 90 minutes in the Spanish league. Speaking after the match, Barca boss Ronald Koeman said of the 21-year-old: “He needed time to adapt but I’m now seeing him getting more involved on the ball, especially in one-v-ones with pace and focus. He still has to improve, but he’s getting more confident every day.”

Trincão himself told reporters of his second goal: “I was just lucky enough to follow up behind Messi and score my second,” before adding that he was happy for 18-year-old debutant Ilaix Moriba to take his first bow. “I am happy for Ilaix making his debut at Camp Nou, we have a lot of very good young players,” Trincão said.