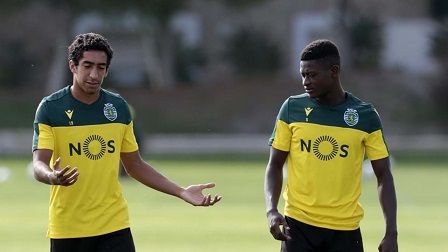 With more than a week to go until the start of Euro 2020 and all the other major football leagues and cups done and dusted for the 2020/21 season, much of the attention of the football world revolves around transfer speculation.

Some of the hottest prospects this summer are Portuguese. Barcelona seem to be targeting João Félix and there have been persistent rumours about a potential swap, which could see Antoine Greizmann return to Atletico Madrid in exchange for Félix during the summer window.

Sporting is widely known as a superb talent factory. It is the only club to have produced two Ballon D’Or winners in Luis Figo and Christiano Ronaldo and now several hot prospects like Nuno Mendes and Tiago Tomás are attracting a raft of suitors to Lisbon.

Arsenal has been involved in talks about the 18-year-old striker, Tomás, for months. Even as the likelihood of the move has decreased with Sporting winning the Primeira Liga and Arsenal failing to qualify for European football, it is still possible that it will go ahead.

Tomás is highly sought-after, even so he is not the Sporting 18-year-old currently in greatest demand. There have been persistent rumours that both the Manchester clubs, City and United, as well recent Champions League winners Chelsea, are keen on signing Nuno Mendes.

The progressive work of Manchester United over the season was impressive and even if they have not won any silverware after Mourinho left, the club is clearly moving in the right direction. If they should be able to bring on board Nuno Mendes it could be a giant leap towards challenging City during the upcoming season.

It is easy to get caught up in all the hyperbole of transfer speculations, however it is important to remember that young players picked up by foreign clubs sometimes need time to adapt and there are many examples of players getting less time on the field than expected.

Vitinha, the Portuguese midfielder has recently admitted that he expected to play more for Wolves last season. He started in five league matches and racked up 515 minutes.

Cristiano Ronaldo was signed by Manchester United as an 18-year-old. His transfer fee of £ 12.24 million made him, at the time, the most expensive teenager in English football history. However, even as his first season was a great success he still only played 1551 minutes of league football. This is less than half of the 3108 league minutes Bruno Fernandes played last season and considering that five of Ronaldo’s team mates, Tim Howard, Gary Neville, John O’Shea, Mikaël Silvestre and Ruud van Nistelroy all played in excess of 2700 league minutes during the 03-04 season, it shows that even the all-time greats like Christiano Ronaldo needed some time to fully adapt.

There are many sites to turn to if you want to stay abreast of transfer speculations. Lilywhitespurs seem to be very well informed about all things Tottenham and you can do much worse than to turn to theoldpeacocks for the latest Leeds transfer gossip.