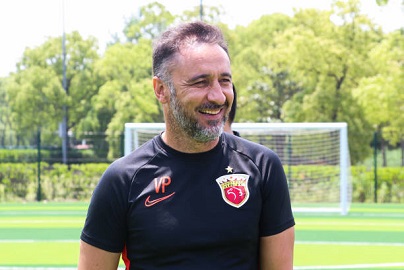 Vítor Pereira is back in football after taking the reigns at Turkish giants Fenerbahçe for the second time on a contract running until 2023.

Pereira has been without a club for six months having left Chinese side Shanghai Port FC at the turn of the year. His arrival in Istanbul sees him return to the club he coached for the 2015-16 season, for what is his sixth job abroad since leaving FC Porto after back-to-back titles in 2013.

“I always felt passion and ambition at Fenerbahçe,” said the 53-year-old when he was presented to the media on Friday afternoon. “However, more time was needed to establish a stable structure and achieve the targeted success.

“During my meeting with President Ali Koç, it didn't take long for me to realize that our perspectives were very similar. I am grateful to him for giving me this opportunity. Fenerbahçe's vision for the future and what he told me impressed me a lot.”

Pereira’s new employers have intriguingly been linked with an array of Portuguese managers in recent weeks, including Nuno Espírito Santo, Paulo Fonseca, Marco Silva and Abel Ferreira before finally getting their new boss.

Pereira took the opportunity during his unveiling to reveal some of the detail of the discussions that took place during his meeting with club president Ali Koç before taking the job.

“In an exclusive interview I gave to a newspaper in January, I stated that clubs in Turkey do not think about the future and do not set a vision for the future. Fenerbahçe Sports Club came to me with a very impressive plan and program,” he said.

“I feel that this plan is part of a structure that will lead us to success. That is why I am so excited. However, another issue that doubles my excitement will be to appear in front of the fans of the great Fenerbahçe community. I miss the enthusiasm of our fans in the stadium too.

“I hope that next season we will reach the long-awaited championship by standing shoulder to shoulder.”

Fenerbahçe have not won the Turkish Super Lig title for seven years. However, with the club’s media pointing out that Pereira’s points average during his season in charge is the highest in the last half decade, optimism is growing that the Portuguese can add to his impressive record for winning trophies in various countries.

Having led Porto to consecutive Primeira Liga titles, the Aveiro native then won the Greek title with Olympiacos before guiding Shanghai Port FC to their first and only Chinese Super League title during his stay in Asia.

There goes my hope that you would usurp the Enginheiro and take over the Seleccao.

Two extremely talented guys who are in leagues not exactly easy to follow.

THE TRU FOREVER! I speak from the HARR!