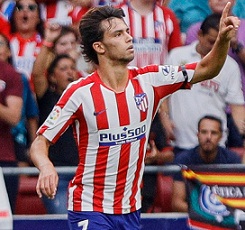 It’s been a frustrating six months for João Félix. Things appeared to be on the up for the former Benfica star early last season as he picked up the November Player of the Month award in La Liga following a string of dazzling performances for Atletico Madrid.

But injury marred the second half of the season for Félix, he came in for extreme criticism from former Manchester United skipper-turned-pundit Roy Keane at Euro 2020, and as soon as the tournament ended he went under the knife for an operation to fix a long-standing ankle problem.

Within hours of Portugal’s defeat to Belgium, the only match in which Félix featured for the Seleção at the tournament, it was confirmed he would be having an ankle operation on a long-term issue that’s been carried since November 2020.

On Thursday the official Atleti Twitter account posted images of Félix being welcomed back to the club, on crutches, following the surgery.

Reports suggest that Félix was encouraged to withdraw from this summer’s Euro 2020 finals to have surgery earlier in the summer. However, the youngster insisted he teamed up with his compatriots to try and defend their European crown. Had Roy Keane known this at the time of his comments, the Irishman may not have been so scathing.

Fans of Atletico Madrid will have everything crossed that Félix will be fit and firing for the 2021/22 La Liga campaign. Although Atletico head coach Diego Simeone was always a passionate international player for Argentina in years gone by, he may have been dismayed at the youngster’s decision to play at Euro 2020 and potentially do further damage to his ankle. The 2020/21 La Liga schedule was anything but easy. Coupled with a run in the Champions League and Euro 2020 action, it’s clear that Félix has endured a whole season of fixture congestion with his troublesome ankle. Recent academic studies revealed that fatigue from previous games can last up to 72 hours after a match, leading to rising blood level markers such as muscle damage and oxidative stress. 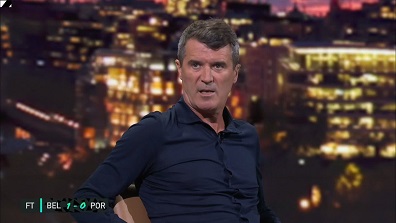 Irishman Roy Keane famously took no prisoners as a player, and he has carried the same attitude into his media work. Currently working as a pundit for ITV Sport, Keane cut an animated figure in the post-match analysis of Portugal’s narrow 1-0 defeat to Belgium in their last 16 Euro 2020 clash.

Keane was audibly critical of the performance of João Félix, with the 21-year-old entering the fray with his side already 1-0 down against Roberto Martinez’ Belgians. Félix squandered an opportunity to draw the Portuguese level late on, scuffing his shot after a combination with Cristiano Ronaldo. It was an evening which saw Belgium keeper Thibaut Courtois have precious little to do physically, aside from a close-range save from a Rúben Dias header, a tame header from Félix and a sliding effort from André Silva.

Félix’s late miss left Roy Keane exasperated at the full-time whistle. He said that he often gets “really annoyed” about “quality players” that fail to hit the target with goal attempts in pressurised situations. Keane said there was “no excuse” for Félix’s poor execution and subsequently labelled him an “imposter” for his ineffective display when it mattered most. Compatriot Bruno Fernandes did not escape the wrath of Roy Keane’s tongue either. The Manchester United midfielder also drove Keane “crazy” against Belgium, who insisted that Félix, Fernandes and co. had “no one to blame but themselves”.

Whether Keane’s criticism of Félix is justified remains to be seen. On the face of it, it would seem somewhat harsh to apportion all the blame for Portugal’s defeat squarely at the feet of a 21-year-old substitute. However, when you are signed for the second-highest transfer fee ever paid for a teenage footballer, Keane’s levels of scrutiny may well be warranted.

The ankle ligament surgery performed by highly reputable Dutch surgeon Cornelis Nicolaas Van Dijk is due to keep Félix sidelined for up to two months. Félix has a history of ankle injuries too, which makes this surgery even more essential, forcing Atletico and Diego Simeone to treat him with kid gloves. Félix will be given three weeks off to recuperate following his surgery, before returning to training slowly over the next month. All of this means that Félix is in a race against time to be fully fit before the curtain raiser of the 2021/22 La Liga season.

The general feeling inside the Vicente Calderon is that this surgery could be what Félix needs to bring an end to these frequent ankle niggles once and for all. Atleti’s decision to undergo conservative treatments in the last six months clearly did not work. This treatment is an opportunity to bring Félix up to speed for what promises to be a gruelling season for Rojiblancos to attempt to retain their La Liga title.

How a player who played as a substitute in one match could be blamed for the failing of a whole team is ludicrous. Roy Keane is the clown.

English pundits are usually clowns aren't they? They get paid for talking trash. They must have partied hard when Portugal got knocked out by Belgium.
As for Keane, he was rude to call Felix an imposter. When a player decides to play for the...

English pundits are usually clowns aren't they? They get paid for talking trash. They must have partied hard when Portugal got knocked out by Belgium.
As for Keane, he was rude to call Felix an imposter. When a player decides to play for the team despite carrying a troublesome injury, we call it Sacrifice,passion not Imposter kinda words.

I think and I am not defending Roy Keane that his point is that Joao Felix did not bring the energy and game changing ability of say a Renato Sanches. Also with these extraordinary transfer fees, it set up the expectation that a player is a...

I think and I am not defending Roy Keane that his point is that Joao Felix did not bring the energy and game changing ability of say a Renato Sanches. Also with these extraordinary transfer fees, it set up the expectation that a player is a superstar and therefore required to deliver. Unfortunately these young players make these moves to these big clubs and as a result , the bar is set high for them. When they don't necessarily deliver, I think you end up with a imposter label. Its harsh and I don't agree. But two sides to every coin.