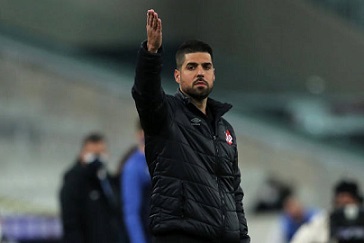 Young Portuguese coach António Oliveira has only been in charge of Brazilian club Athletico Paranaense for around three months, yet during that time Athletico have competed in four competitions and played 32 matches in a grueling fixture schedule.

Oliveira, who was on the technical staff last year, was promoted to first-team coach ahead of the 2021 campaign in what is his first leading role. At 38, the son of Benfica legend Toni has enjoyed an impressive start in Curitiba and remains on course to challenge on all fronts.

Athletico are currently 5th in the Campeonato Brasileiro after twelve matches, with a game in-hand on those above them. In the cup competitions, the team has progressed to the round of 16 in the Copa do Brasil and will play in the quarter finals of the Copa Sudamericana after a convincing recent victory over Colombia’s America de Cali. Oliveira was initially unable to acquire the documentation to coach in South American continental competition, but was on the bench for resounding 5-1 aggregate win over America.

Oliveira’s side beat Internacional 2-1 in the league on Sunday, putting an end to a three-match winless run in Brasileirão. Last week the Portuguese was pushed to complain about the impact of the packed calendar after defeat at Ceara following their midweek trip to Cali. Having responded with victory over Inter, some questioned the quality of Athletico’s performance in the second half, given they had taken a 2-0 lead at the break.

“Players are not machines”

“People who think it’s just us playing are wrong,” he said. “We played against an opponent who were in the Copa Libertadores, runners-up in Brazil last year, and we played a great game. No team in the world can attack for ninety minutes. The players are not machines. The competitive density is enormous for a team involved in all competitions.

“We didn’t repeat the same pressure and consistency as we did in the first half, but we did have opportunities in the second half. The opponent hurt us a little but we were very balanced in attack and defence. People end up thinking this is like playing PlayStation, where there isn’t a real opponent.”

There is to be little let-up in fixtures across the coming weeks, with Athletico to play home and away legs in the Copa do Brasil (vs Atletico Goianiense) and the Copa Sudamericana (vs Liga de Quito) as well as five league matches in Brasileirão before the end of August. The Lisbon native is ready for the challenge and maintains a clear perspective of what is important for Athletico.

“The demand is increasing, because opponents are more and more aware in preparing to play Athletico. If we can play well, then great. If we can score ten goals, we are happy. But our premise is always the victory.”