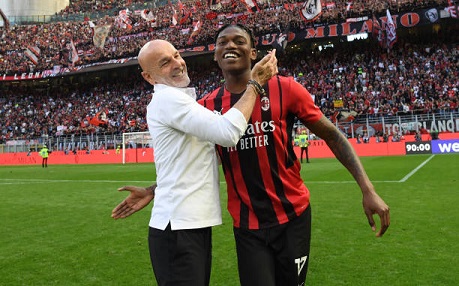 As leagues across Europe head into the final decisive weeks of action, Portuguese players were at the heart of several stories this weekend of clubs homing in on their targets. Most notable was Rafael Leão, who produced a late winner to give AC Milan the victory they needed to stay on top in Serie A with three games remaining.

Similarly in Scotland, Celtic are close to regaining their Premiership crown after a goal by Jota proved crucial in a 1-1 draw with Old Firm title rivals Rangers. Meanwhile in Italy’s Serie B, Portugal U21 striker Dany Mota’s brace has put Monza on the brink of their first-ever promotion to the top flight and Rony Lopes snatched a late winner in Greece as Olympiacos prepare to celebrate retaining their crown.

AC Milan hold a two-point lead over city rivals Inter with three games remaining in the battle for the Italian Serie A title, after Rafael Leao’s goal settled a nervy home clash against Fiorentina. Milan recently endured back-to-back goalless draws which threatened to derail their title hopes, but after re-finding the scoring touch Saturday’s meeting with La Viola at San Siro looked to be headed for stalemate.

The score remained 0-0 until the 82nd minute when Leão took advantage of a poor clearance from goalkeeper Pietro Tarracciano and punished the Fiorentina man with a right-footed finish. The goal was Leao’s 10th in Serie A and drew a huge roar from the home crowd, who are hoping for a first league title in 11 years.

“Scoring the goal? The best moment for a player,” Leão said after the match. “The important thing was the victory. We have created many opportunities and there was some anxiety about the wasted chances. It was a final, now we have to stay focused on our goal.”

“We must all remain united, even our fans, so we can reach our goal. We try to do what the coach says with a great desire to run for our teammates.”

In Italy’s second tier, an intriguing story around Monza, who are aiming to gain promotion to Serie A for the first time in their history. The Lombardy club have spent a total of 40 seasons in Serie B, which is the highest amount of any Italian club never to have contested a campaign in the top flight.

However, with just one match left to play the Biancorossi sit in 2nd place in the direct promotion places, meaning they have their destiny in their own hands heading into next week’s final matchday. A 3-0 win over Benevento this weekend was the perfect send off for their final home match, with former Portugal U21 striker Dany Mota scoring twice in the victory.

Both goals saw Mota show great composure, with the first coming after a goalless first half and just minutes into the second period. Mota seized on a loose back-pass and rounded goalkeeper Alberto Paleari to finish, and the forward would show similar composure later to get Monza’s third with a clinical finish from Andrea Barberis’ pass.

Dany Mota is on the verge of being part of something special in Italy. He scored twice this weekend as Monza moved a step closer to their first-ever promotion to Serie A. They sit in 2nd heading into next week’s final day. pic.twitter.com/PIem4roJom

The win saw Monza leapfrog Cremonese into the top two, and now attention turns to next week’s trip to Perugia, with Monza knowing a victory will see them final secure promotion to Serie A next season. Anything less would allow Cremonese – just a point behind – the chance to regain their promotion place.

“It will be a final, like all the other games we have been playing,” Mota said in his post-match press conference. “But this will be fundamental because we know the importance of it. We have to prepare for it calmly, as we have done up until now. We don’t have to force the win but just do as we did today.

“I want to make history. I want to play with this shirt in Serie A. But first of all there is a game; there is a final step. We have to stay with our heads 100% on that game and then we’ll see about the rest.”

One of the revelations of the Portuguese Abroad this season has been on-loan Benfica forward Jota in Scotland with Celtic. The 23-year-old was recently voted into the Scottish Premiership Team of the Season having contributed a total of 15 goals and assists since arriving last summer on a season-long deal.

With three matches left to play, Celtic lead arch-rivals Rangers by six points at the top of the standings – an advantage maintained this weekend after the sides drew 1-1 in the Old Firm derby at Celtic Park. Jota put Celtic ahead after twenty minutes and although Fashion Sakala’s leveller in the second half leaves Rangers low on hope in the title race, Jota admitted his team wanted the victory.

Jota with a big goal this weekend in the Old Firm derby 🇵🇹 pic.twitter.com/RYbNqpS11k

“It’s always a tough game against Rangers so we tried our best. We wanted to win but, unfortunately, we didn’t,” Jota told Celtic’s in-house media.

“Our style of game always aims for goals and pressing, and keeping after them, but unfortunately we didn’t score again after the first goal but we kept on trying, and then we conceded a goal. But the main thing to think about all of this is that we didn’t give up.

“It’s game after game. We know how important the next one is, so we keep on, we don’t give up, we get together the troops and we go into battle next week [against Hearts].”

It was a busy weekend of Luso goalscoring overall and there was a nice moment in Greece for Rony Lopes, whose last-gasp strike edged Olympiacos closer to confirming another Super League title. Lopes’ brilliant winner in the 98th minute gave Olympiacos a 3-2 win over PAS Giannina and means they are 13 points clear of 2nd-place PAOK with five matches remaining.

Gedson Fernandes was in good form this weekend in Turkey, where he is playing for Rizespor on-loan having agreed a move to Besiktas in January. Rizespor, who are all but relegated, produced a stunning 7-1 win at Goztepe, with Gedson scoring twice in the victory. Elsewhere in the Turkish Super Lig, there was a goal for Daniel Candeias in Alanyaspor’s 2-1 win against Yeni Malatyaspor, while Miguel Cardoso got a consolation as Kayserispor lost 3-2 to Besiktas. In the second tier, João Pedro’s brace helped Bursaspor overcome Manisa 3-1 away from home.

Pedro Santos scored his first goal of the MLS season in the United States this weekend, and it was one to remember as the Portuguese smashed in a vicious free-kick for Columbus Crew in their 3-0 win over DC United. In France, David Costa continued his recent good form with Lens, scoring in their 2-2 draw against Nantes in Ligue 1.

Pedro Santos got his first MLS goal of the season in style yesterday pic.twitter.com/9McfQrXJcS

Flavio Paixão continues to defy his age in Polish football. Having recently become the first foreign player to score 100 goals in the Ekstraklasa, Paixão added another this weekend for Lechia Gdansk in their 2-2 draw at Zaglebie Lubin.

Finally, there were goals for Pedro Eugenio, who struck twice for Astana in Kazakhstan as they were held 3-3 by Turan Turkistan, as well as Hugo Firmino in Armenia for league leaders Pyunik, while in Luxembourg Tino Barbosa scored the winner from the penalty spot in Differdange’s 2-1 win at Petange.